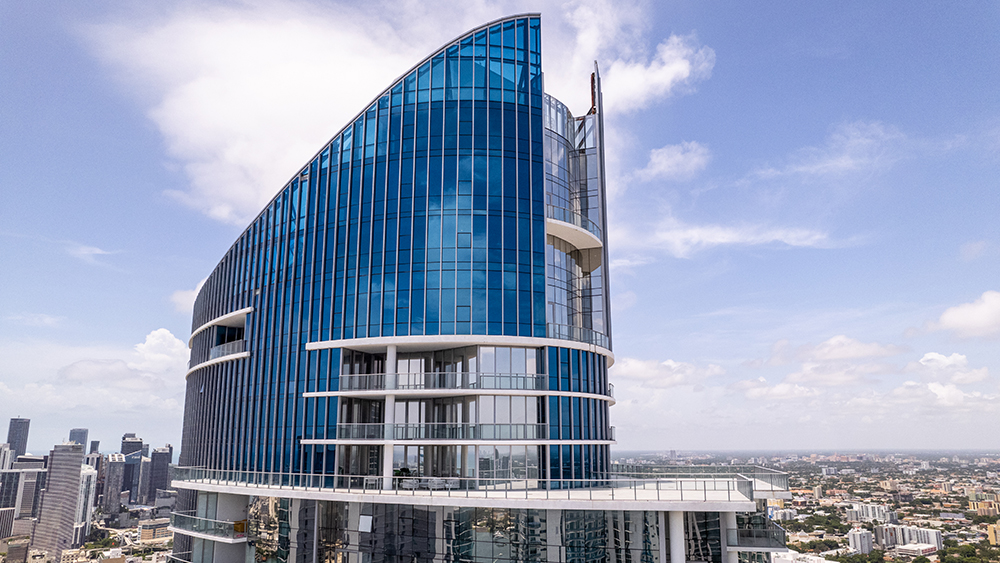 The sky-scraping Paramount Miami Worldcenter condo tower in downtown Miami is one of the first to boast a rooftop “skyport” deck designed to accommodate future flying taxis. But a stunning 4,000-square-foot penthouse on the Paramount’s 52nd floor goes one better: It comes with its own massively-sized terrace big enough to land a flying Uber right outside the front door.

Before then, the home’s 2,500-square-foot terrace—the biggest in the Paramount—makes the perfect venue for Miami-style entertaining, with its jaw-dropping views across the downtown skyline all the way over to South Beach and the Atlantic Ocean, and even west for stunning sunsets.

A private elevator from Penthouse 5201’s three underground parking spaces whisks you up to the 52nd floor and the home’s front entrance. Inside, the residence was fully-furnished by acclaimed Miami-based interior designer Adriana Hoyos, and is being sold with all furniture and art included. “We’re finding buyers interested in this kind of luxury property prefer a home that’s move-in ready. They don’t want the headache of dealing with furniture companies and long delays,” says Ramirez.

The 4,083-square-feet of space includes four bedrooms, five bathrooms plus a den. The open-plan design makes for spacious living areas and a large eat-in kitchen. But what really sets the home apart is its acres of towering, floor-to-ceiling windows that flood the condo with light.

Outside, in addition to that flying-taxi-ready deck, there’s a sizable covered al fresco dining area and endless wrap-around terraces for taking in the views.

Records show the current owner bought the property pre-construction for $3.8 million, taking possession in August 2020. According to Ramirez, the current asking price of $5.2 million reflects, in part, the super-heated market for luxury condos in Miami right now.

The latest report from property pricing specialist RealtyHop shows that Miami has just overtaken Los Angeles as the second most expensive housing market in the US, behind New York City.

One of the bedrooms.  Photo: Gabriel Matarazzo/ONE Sotheby’s International Realty

“People love the lifestyle that Miami offers, and this penthouse offers the best lifestyle options available,” notes Ramirez. “And imagine calling-up a flying taxi to take you from your own deck across to South Beach for some fun.”

If it’s lifestyle perks you’re looking for, this building delivers on that front in spades. Completed in 2019, the 60-story tower with 569 homes (which originally ranged in price from $750,000 to $10 million) claims to offer the most amenities of any luxury property on the planet. Among these are a world-class gym with a boxing ring, basketball and racquetball courts, two tennis courts, multiple pools, a jogging path and the world’s first outdoor soccer pitch in a residential high-rise. Add to these a yoga studio, a music recording studio, screening room, golf simulator, dog park and even a hair and nail salon.

So amenity-focused is the Paramount that the building employs a full-time “lifestyle concierge management team” to cater to every resident’s whim or wish.

The tower even has its own soccer pitch.  Photo: Neriely Garrido/The RS Team

Ramirez, who shares the coveted listing with his RS Team colleague Monica Sarmiento, explains that the 700-foot-tall tower is the centerpiece of the $4 billion, 27-acre, mixed-use Miami Worldcenter development.

The tower itself has been developed by Florida real estate veteran Dan Kodsi, with the design for the stunning, curvilinear glass tower coming from the drawing board of Boston architects Elkus Manfredi.

“This is where the action is in Miami right now,” says Ramirez. “The Paramount is leading the downtown revival with its cool vibe and single-minded focus on lifestyle.”

Check out more photos of the apartment below:

One of the terraces.  Photo: Gabriel Matarazzo/ONE Sotheby’s International Realty