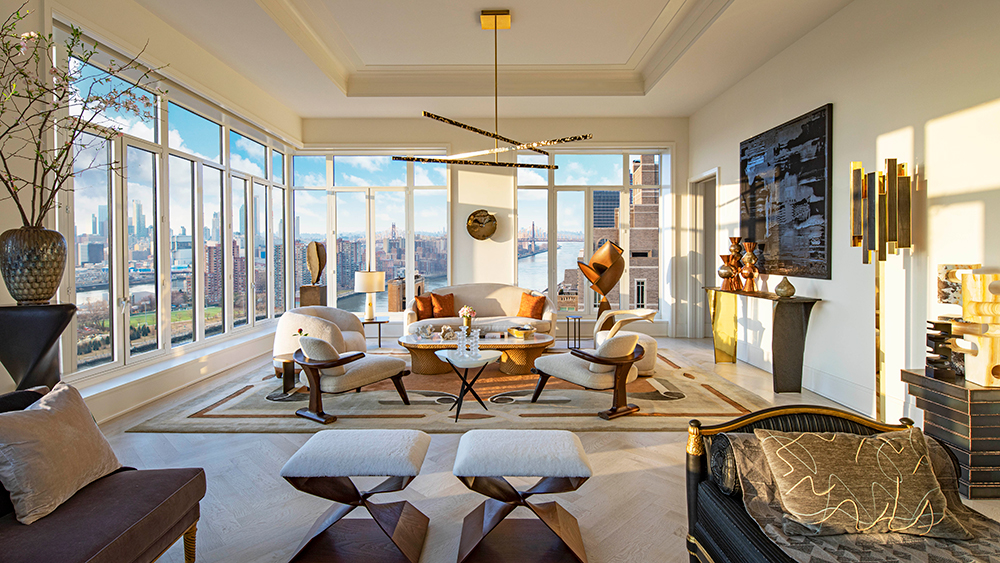 The great room, which features a site-specific light fixture by Douglas Fanning.

Living in New York City is great, but the constant hustle and bustle isn’t for everyone. Those looking for a more suburban escape from Manhattan proper typically decamp to Brooklyn or Queens—a new condo building on the Upper East Side looks to remedy that. 40 East End is located at the farthest corner of the UES, where all the streets turn into the esplanade. Since there’s little traffic, it feels like a quiet suburb that’s still within easy commuting distance of Midtown and beyond. Those looking to upgrade to somewhere a bit more low-key can move in to the best unit in the building: A $25.5 million penthouse on the 18th floor.

The 6,000-square-foot residence is furnished by Maison Gerard, a partnership that gives the art-and-design-gallery a showroom footprint further uptown, in addition to its pre-existing location near Washington Square Park. Highlights include sight-specific light sculptures by Douglas Fanning, chairs and chandeliers by Achille Salvagni and wooden dining chairs by Maison Leleu, to name a few. Interested buyers can purchase these pieces separately and keep theme exactly where they are now.

Want a closer look at the penthouse? Robb Report got a tour from Scott Avram, senior vice president of Lightstone, the developer:

Tall glass windows showcase spectacular views of Manhattan and the East River from almost every room. Those who want a closer look can take the stairs to the rooftop, which is equipped with an outdoor kitchen and has plenty of room for entertaining and dining alfresco. Altogether, the unit has 2,000 square feet of exterior space.

It’s a four-bedroom, four-and-a-half bathroom home, with a library that can be converted to another guest room. All of the marble was imported from Italy, including the gorgeous Arabescato Cervaiole and Nero Marquina stone foyer floor. Since the home is a duplex, all of the bedrooms are located on the lower floor, including the sprawling primary suite, which includes a bathroom with a private balcony and a soaking tub from Waterworks. Other amenities include a full suite of Gaggenau appliances in the kitchen and a custom marble fireplace in the great room.

The dining room, which features a “Spider” chandelier. by Achille Salvagni.  Michael Kleinberg.

The building itself was designed by Deborah Berke Partners and Gerner Kronick + Valcarcel Architects. Berke lives nearby, so it was a particularly personal project for her. “We were trying to design a building that fit into the context of the neighborhood but that also had more of a modern twist to it,” says Avram. “That’s really Deborah Berke’s expertise.”

Residents can take advantage of the building’s amenities, which include a library, a game room and a fitness center. Since there are only 28 units at 40 East End, they’ll never be too crowded.

The kitchen. The chairs are by Maison Leleu.  Michael Kleinberg

For those who’d prefer cozier digs, residences at the boutique condominium start at $4.5 million. Their layouts are varied, so they feel less like cramped and more like a home. “It really feels like a tight-knit community,” says Avram. “I think that’s what makes it so special. It’s almost like a suburb of Manhattan.”

Check out more photos of the penthouse at 40 East End below: