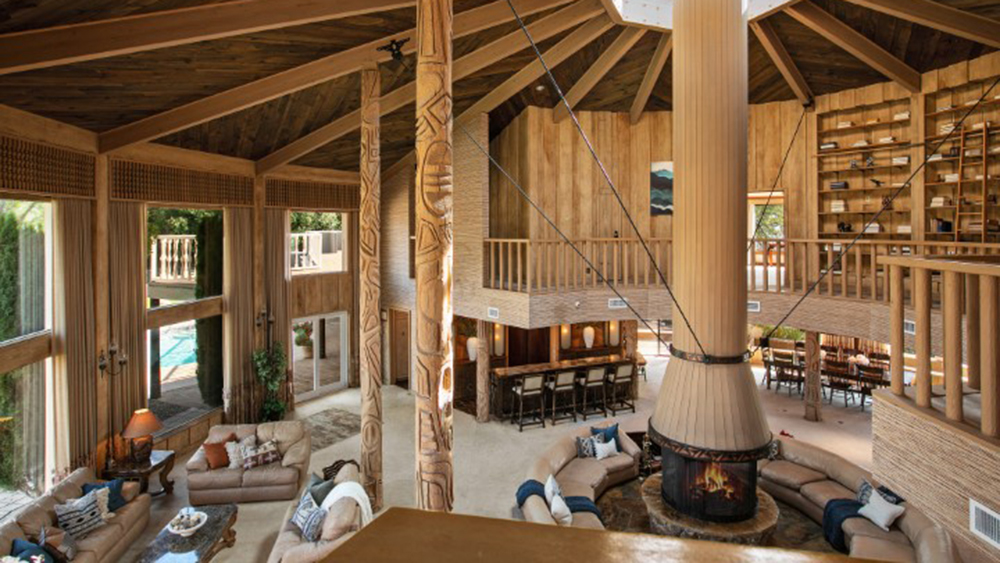 There’s an innate charm to a property that has a bit of history to it—whether it’s a mansion that once belonged to a prominent author or a beach house where a former president vacationed. Then there’s Circle K Ranch in Santa Barbara. Its claim to fame? The Egg McMuffin was invented here.

The beloved egg sandwich was one of many big ideas cooked up at the ranch. Ray Kroc, the founder of McDonald’s, purchased the land for $600,000 in 1966—sight unseen—and developed it into a bona fide corporate retreat for McDonald’s franchisees. Now it’s worth significantly more, as it’s currently on the market for $29 million.

The great room in the main lodge.  PREVIEWFIRST

This is one big chunk of land—554 acres divvied up into six different parcels—and, for another, Kroc spared no expense. Hot off his ever-growing McDonald’s fortune, he built a sprawling, 17,000-square-foot main lodge with more than 20 bedroom suites. Common areas are similarly engineered for large gatherings: There’s a huge, 3,500-square-foot great room with a towering fireplace made of 120 tons of stone, a dining room that can seat 100-plus and, perhaps most importantly, a commercial-grade test kitchen (with some very familiar looking floor tiles) where Kroc and his business partners would test out new ideas for Mickey D’s, the McMuffin among them. A metal plate above one of the stoves still has written instructions on how long to cook a cheeseburger or an order of French fries. The adjacent conference room has lecture-style seating and can host up to 62 at a time.

The commercial-grade kitchen, which was designed to replicate those found in a McDonald’s.  PREVIEWFIRST

Next to the lodge is the “round house,” which Kroc built in 1972 for his wife, a residence with a similarly grand, circular living room (hence the name). It’s a bit more private than the main structure and features 360-degree views of the surrounding Santa Ynez Valley, as well as a library for quiet study.

One of the meeting rooms.  PREVIEWFIRST

Kroc wasn’t the only one who made regular use of Circle K, which, at the time, was known as Double Arch Ranch, for obvious reasons. His brother, zoologist and philanthropist Robert Kroc, had his own, separate home on the property. The three-bed, two-bath residence remains, and it was where the younger brother would frequently stay and conduct his scientific research. In addition to Robert Kroc’s old place, there are two other cottages elsewhere on the property for guests, each with three bedrooms, so you can easily host 100 friends—or corporate guests—at a time.

One of the bedrooms.  PREVIEWFIRST

In terms of amenities, there’s a helicopter pad, two tennis courts, a pool and hiking trails. The biggest perks, though, are the buildings themselves, which are largely the same as when Kroc first built them. Gerald Kessler, the founder of Nature’s Plus vitamins, owned the property after Kroc, and used it similarly—to host business partners for weekend off-sites. Rather than change it, he largely maintained what was already there.

Circle K could easily be transformed into an equestrian center—there’s plenty of space for it, and the area is popular among the riding set—or used as a family compound. That being said, there seems to be some interest in Kessler’s line of thinking—that is, keeping it exactly the same.

One of the tennis courts.  PREVIEWFIRST

“Several of the calls we’ve fielded on the property are from people who want to use it as a corporate retreat or something in that fashion,” says listing agent Scott Westlotorn.

There’s been at least one million-dollar idea here, after all. Why not a few more?