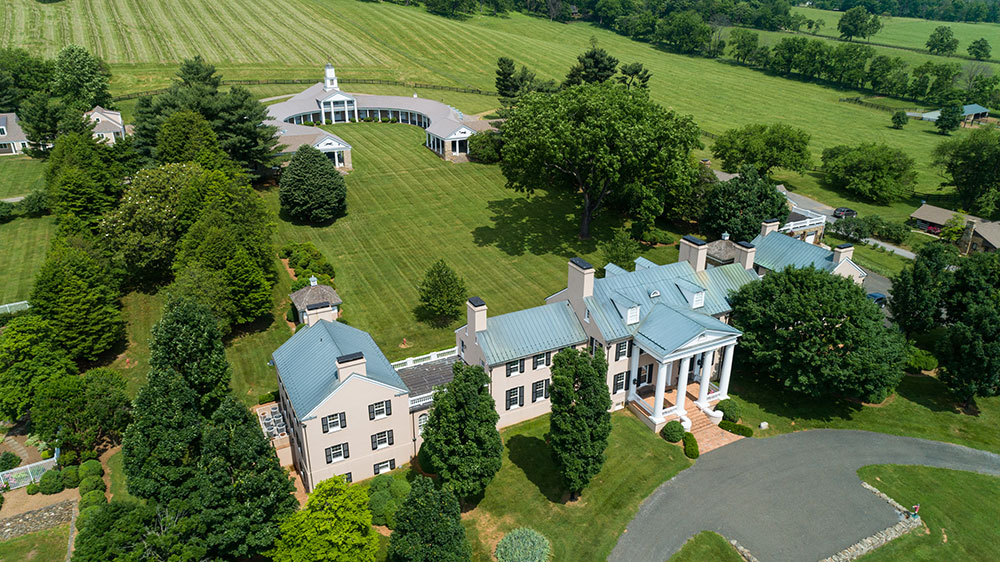 Virginia horse country is legendary for a reason—rolling green hills, stately architecture and lots of room for pedigreed ponies to roam. This Middleburg property in the heart of it is the perfect example. Offered at $34 million, Llangollen, the Blue Ridge Mountain-adjacent estate, covers 1,100 acres and has a history as prestigious as the many horses that have been stabled there.

The site of a skirmish that served as the prelude to the Battle of Gettysburg in the 1860s, John Hay “Jock” Whitney—publisher of the New York Herald Tribune and president of the Museum of Modern Art—purchased the land and transformed it into an equestrian mecca of sorts, constructing a horseshoe-shaped stable, a training track and a separate racing stable, which would host 20,000 attendees for the annual Llangollen Cup steeplechase. In total, Llangollen’s various equestrian facilities can house about 100 horses.

What horse wouldn’t want to stay in this stable?  Photo: Courtesy of Engel & Völkers

Since Whitney’s time, the estate has fallen to Morgan Stanley tycoon Donald Brennan, who purchased it in 2006 from Roy Ash, a businessman and Nixon White House advisor, for $22 million. Brennan picked up where Ash left off and continued to revamp the property and its interiors, resulting in a 10,000-square-foot mansion furnished with European charm and antiques, with modern amenities. And the nine-bedroom, 11-bathroom residence is just as expansive as the acreage upon which it sits, complete with 17 working fireplaces and nine adjacent guest houses.

Brennan and his family certainly enjoyed their time at Llangollen—his wife and three daughters were all involved in the show horse world, while he himself preferred to burnish the vintage saddles housed in the basement—they’re now putting it back on the market, with a price tag that reflects its many interior remodels and repairs.

Llangollen’s pedigree has earned it a spot on the National Register of Historic Places, and while it’s already in pristine condition, the next owner will certainly have even more updates and expansions to add to its long narrative. Up to the challenge? German luxury real estate company Engel & Völkers has the exclusive listing.

Check out Llangollen and its landscape, below:

The a toile-covered bathroom.  Photo: Courtesy of Engel & Völkers

The mile-long private approach to the Llangollen estate.  Photo: Courtesy of Engel & Völkers