The architecture of Southern California’s Balboa Island evokes that of Nantucket and other East Coast islands. Like the Atlantic’s weathered, shingled cottages, the 1920s wooden bungalows of this small vacation community just off the Newport Beach mainland display an abundance of character and convey a sense of warmth.

Against this backdrop, on a prominent point overlooking Newport Harbor, an incongruous single-story slab of glass, steel, and concrete was erected in the 1950s. “It was the worst of the old Palm Springs look,” says Bob Olson, the owner of the property on which that structure once stood. “It was physically cold, unattractive, with windows that hadn’t been opened in 20 years.”

When Olson and his wife, Christine, acquired the house in 2004, they knew that it suited neither their lifestyle nor the island’s character, so they had the building demolished and commissioned architect Robert Sinclair, of Sinclair Associates Architects in Los Angeles, to design a new residence. They wanted their home, which ultimately would cover 5,300 square feet, to blend with its surroundings and look as though it had been built in the same era as the other homes on the island.

“Small is beautiful,” says Sinclair, noting that much of the island’s charm derives from its diminutive size (the distance around the island, which actually is two islands, is about 2.5 miles) and its modest dwellings. Thus, Sinclair’s first task was to address the question of scale: How could he integrate a house as large as the Olsons wanted into a neighborhood of much smaller homes?

“The building mass is broken down into smaller, more differentiated roof forms to diminish the structure’s perceived size,” Sinclair says of his design plan for the Olsons’ home. The size of the windows and doors, the width of the floorboards, the spacing of the ceiling beams, and the selection of shingles (instead of white clapboard) for the exterior all contribute to the perception—or perhaps deception—of the owner and their neighbors that the home is built on the same scale as Balboa’s cottages.

The site of the residence presented an even more difficult problem than did its size. The location is one of Balboa’s most desirable, but it also is one of the island’s most visible. “Everything can be seen from the waterside, from both boat and walking traffic,” says Sinclair, referring to the much-trafficked canal and to the pedestrian pathway that follows the island’s perimeter and runs along the edge of the Olsons’ property. The architect designed an interior courtyard onto which most rooms open, creating a private haven of indoor-outdoor living when the surrounding rooms’ sliding doors are retracted or a secluded retreat when the doors are closed and the drapes are drawn. For additional privacy, landscape architect Greg Grisamore, of Pasadena, Calif., raised the yard so that it is two feet higher than the pedestrian pathway, and he added plantings between the home and the path.

To ensure privacy in the much-used, multipurpose family room, Sinclair buffered the space with the music room, which occupies the corner of the home that is most exposed to pedestrians and boaters. Light pours through the music room’s wall of full-length casement windows, conveying the impression of openness. However, because the music room is connected to the rest of the house only by the one doorway leading to the family room, the interior’s exposure to curious passersby remains limited.

Los Angeles designer Mark Cutler worked with Sinclair. “I immediately redesigned the master bath, making it more like a salon and filling it with a sense of space,” says Cutler, who was born in Australia and is trained as an architect. In addition to addressing the Olsons’ concerns for privacy and scale, Cutler and Sinclair also incorporated the couple’s requests for a conservatory that recalls Christine’s Southern roots and, for Bob, a dining room modeled after one in which a captain would have taken his meals aboard his steamship.

Cutler placed a 19th-century dining table acquired during a shopping trip to London in the center of the nautical-themed room, which also features an abundance of polished monochromatic woods. “In a new room referencing the past, it’s especially important to use an authentic focal piece to set the mood,” says Cutler. (He does not employ antique chairs in his interiors, because he finds them uncomfortable.)

Above the paneling in the dining room, Los Angeles artist Scott Flax painted an 18-inch-tall mural reminiscent of the 19th-century, hand-blocked wallpapers that depicted scenes of exploration, discovery, and exoticism. Cutler repeats this motif throughout the house.

The family room—a cozy area for the Olsons and their two children—doubles as a sophisticated salon for cocktails or, when the doors to the courtyard are open, an expansive entertainment space. Continuing the exploration theme, Cutler furnished the room with a chinoiserie cabinet and a faux zebra skin on the floor, the latter alluding to big-game hunts in Africa. Even the throw pillows—covered in a black-and-white, tea-stained toile of pagodas and fantastical landscapes—evoke travel.

The window treatments in the music room are cut from the same cloth as the family room’s throw pillows, and the green and gold ceiling, which Flax painted in the pattern of a chinoiserie garden screen, references such 19th-century jewels as the Royal Pavilion in Brighton, England, and the Ladurée tea shop in Paris.

While neither the pavilion nor the tea shop would blend well with the cottages on Balboa Island, the allusions to them within this residence do add to the home’s character. 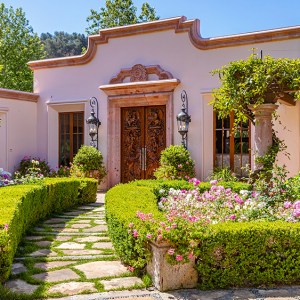 Holy Guacamole: This $38 Million Malibu Estate Has an Orchard With 600 Avocado Trees 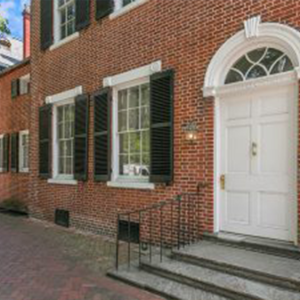 Inside a $10 Million Washington, DC Home Where Jackie Kennedy Once Lived 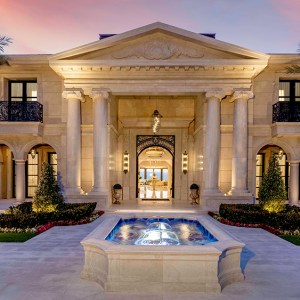 Home of the Week: Inside a New $70 Million Crystal-Encrusted Palace on California’s Newport Coast 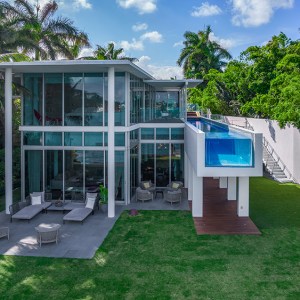 This $22.5 Million Miami Beach Home Lets You Step Into the Infinity Pool Right From the Primary Bedroom