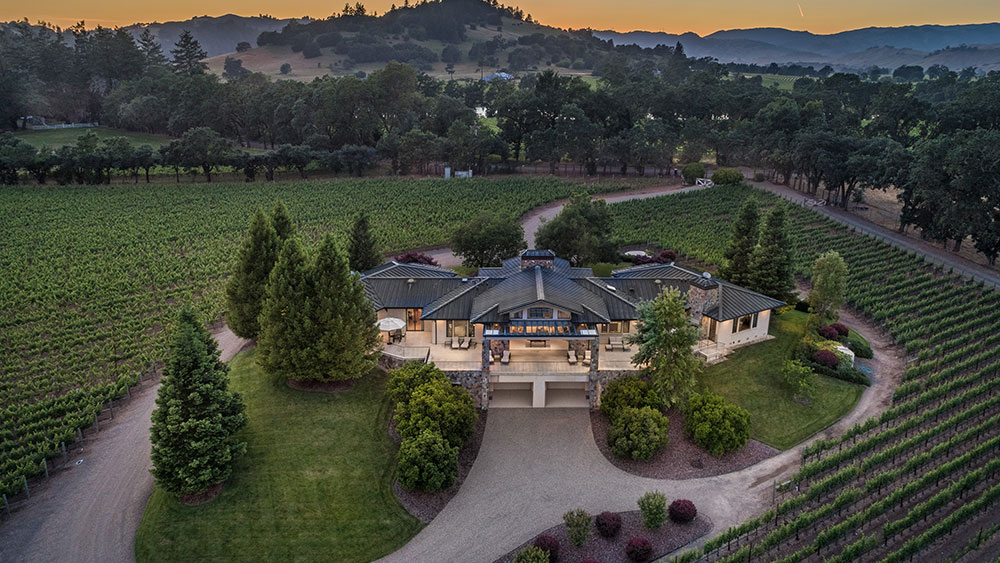 Ever dream of owning your own vineyard in Napa? Then this exquisite, boutique winery in Knights Valley, just north of Calistoga, with its 40 acres of Cabernet Sauvignon vines, might fit the bill.

Owned by Norma Hunt, wife of the late Lamar Hunt, the Dallas oil tycoon and founder of the Kansas City Chiefs NFL football team, the vineyard is known for its sustainably-cultivated grapes and prestigious, estate-grown wine, Perfect Season.

Just so you know, a bottle of the 2016 Perfect Season Cabernet—just 250 cases were produced—boasts a Robert Parker 96+ point rating, and typically sells for around $150 each.

But for all you aspiring viticulturists, the significant appeal of the Hunt family’s Bidwell Creek Vineyard is that it sits on the banks of said creek and enjoys coveted water rights.

Along with the winery, the property includes a lovely, though unpretentious 6,615-square-foot, three-bedroom home with huge decks, beamed ceilings, a stone fireplace, media room, gym, four-car garage and, you guessed it, an expansive wine cellar.

The home opens to the vineyards in every direction.  Photo: Courtesy of Compass/PR Photography

The Hunts bought the land on Franz Valley Road, about 70 miles north of San Francisco, in 2000 and built the home from scratch. The first vines were planted in 2002.

Lamar Hunt, who passed away in 2006, was well-known as a sports pioneer; he’s widely credited with coining the term “Super Bowl.” In addition to founding the Kansas City Chiefs, he helped mastermind the merger of the AFL and NFL in 1966 and was a co-founder of World Championship Tennis.

According to Christine Krenos, of listing broker Compass, Norma Hunt is selling the home and vineyard, but plans to keep the Perfect Season brand.

“This really is a rare opportunity for a connoisseur who dreams of owning a luxurious wine-country getaway, and a vineyard producing a prestigious, highly-desirable, estate-grown wine,” she says.

The Perfect Season website describes how the Hunts developed a passion for wine-making during trips to Tuscany. But it was while in the Bay Area for a Kansas City Chiefs/Oakland Raiders football game that Norma and her husband discovered Knights Valley.

“In 2000, Lamar and I purchased a property in Knights Valley with great potential but in need of loving care,” she says on the site.

“Shortly thereafter, we undertook a multi-year project to reinvigorate the property’s prime agricultural soils, restore the riparian border along our stretch of Bidwell Creek, and plant a vineyard that now is producing outstanding premium grapes.”

According to Compass’ Krenos, Hunt is selling because she believes she’s achieved her goals with the development of the vineyard and is now looking for a new custodian to take over.