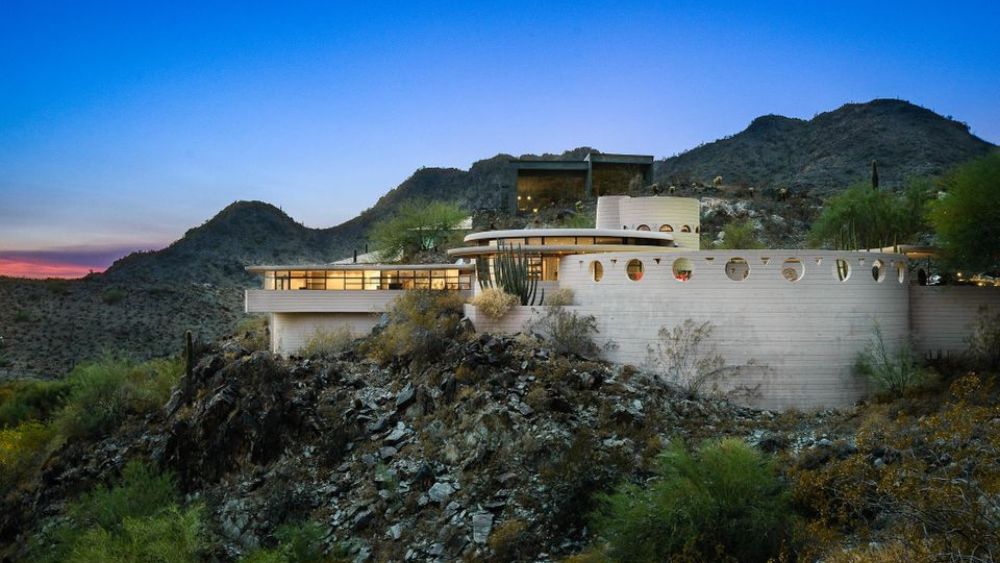 Before Frank Lloyd Wright died in 1959, he designed one last residence known as the Norman Lykes House. Now, the architect’s final creation can be yours.

Sitting on the edge of Arizona’s Phoenix Mountain Preserve, the desert dwelling is one of only 14 other circular-style abodes that Wright ever drew up. Aptly named the Circular Sun House, the project was completed in 1967, almost a decade after Wright’s passing. His apprentice, John Rattenbury, was responsible for carrying out his vision and also oversaw a renovation that took place back in 1994. Today, the midcentury stunner spans 3,095 square feet and holds three bedrooms and three bathrooms across its two floors.

Constructed on a roughly one-acre hillside using a series of overlapping circles made from concrete, the house naturally blends into the rocky terrain. Some have said its spherical structure even takes after the Guggenheim Museum in New York, which Wright also famously designed. Overall, its appearance is admittedly quite striking and also a little futuristic.

Internally, its curved, geometric layout continues. Think arched windows that frame the mountain backdrop, rounded walls that have been finished with golden-hued Philippine mahogany and built-in furnishings that bend with the building itself. Some of the additional highlights include a primary suite with prime views of Palm Canyon. It also has its own lounge, bathroom and private balcony. Elsewhere, you’ll find an office, a library, a den and a media room. Outside, there’s a garden terrace and even a crescent-shaped pool that’s been decked out with mother-of-pearl tiles.

Back in 2019, Wright’s Norman Lykes House was up for auction and sold to the highest bidder for roughly $1.7 million. The buyer was reportedly from out of state and planned on using the residence as a vacation property. However, if you’re looking to get your hands on this rare find nowadays, it’ll cost you a whopping $8.9 million for the spread.

Click here to see all the photos of the Circular Sun House.