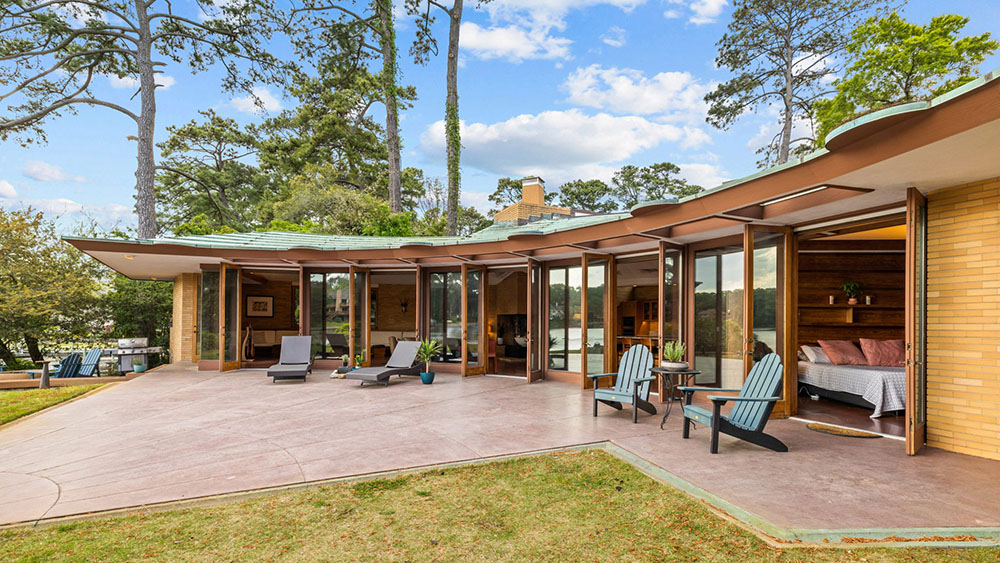 Frank Lloyd Wright designed only three homes in Virginia during his lifetime—and now one of them could be yours.

The four-bedroom, three-bathroom Cooke House, located in Virginia Beach, was just listed for $3 million. It certainly doesn’t look like your classic beach house, but it has all of Wright’s signatures, with its 70-foot-long, window-lined curved great room being the home’s pièce de résistance.

The views from the great room are magnificent.  David Schwartz/Coastal Exposures

Designed in 1953 and built in 1959, the home was commissioned by Maude Cooke, who reached out to Wright after hearing him speak at the Chrysler Museum. “Dear Mr. Wright,” she wrote to the architect in 1951, “Will you please help us get the beautiful house we have dreamed of for so long?” Cooke specified that she wanted a house in which she could host parties, and this definitely fits the bill.

The great room includes a vaulted cathedral ceiling, stunning views of nearby Crystal Lake and a 40-foot-long built-in sofa that ends with an entertainment center at one end and a gas fireplace at the other. If you wanted to the take the party outside, the back patio overlooks the water, where there’s also a new private dock, deck and pier. The home faces westward, and it’s not hard to imagine how spectacular the sunsets over the lake must be.

At just over 3,000 square feet, the house is made of golden glazed brick and red cypress, with concrete floors and a unique copper cantilevered roof topping things off. It’s a variation of Wright’s solar hemicycle designs, and it showcases his preference for natural materials and sharp angles. The most recent owner updated both the kitchen and bathrooms, among other renovations, and previous owners restored the home so that it more closely resembles Wright’s original design, one of the last he completed before his death.

The property is being represented by Robin West at Rose & Womble. It previously sold for $2.2 million in 2016.

See more images of the Cooke House below.

The kitchen opens into the dining area and the great room.  David Schwartz/Coastal Exposures