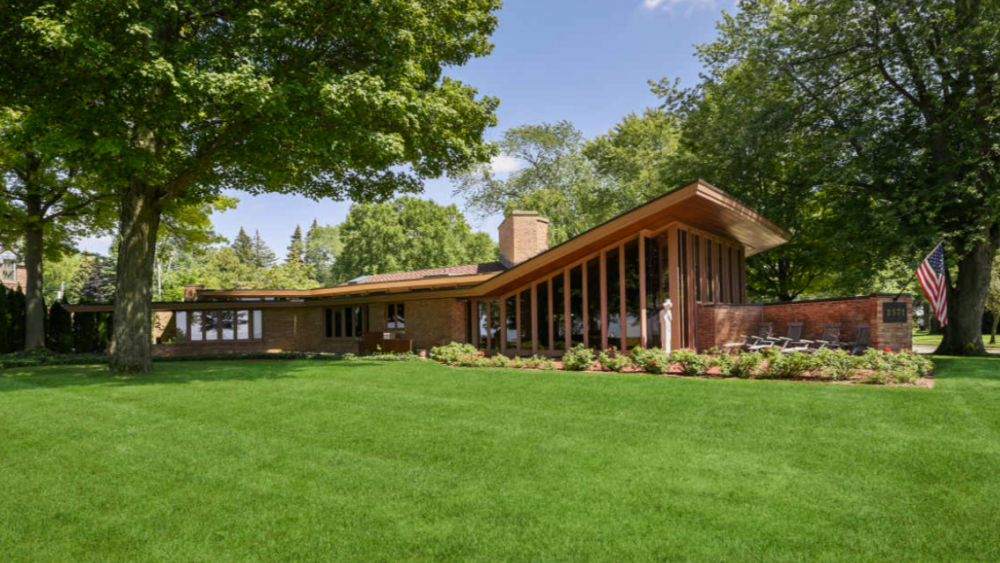 Any midcentury-modern devotee will know Frank Lloyd Wright’s resume by heart, from the scenic Fallingwater in Pennsylvania to the swirling Guggenheim Museum in New York. Those looking to add one of the late architect’s works to their portfolio are in luck, then, as one of his designs has just listed in Michigan for $2 million.

Known as the Harper House, the home was built for Dr. Ina Morris Harper in 1950. She commissioned Wright to build the house and lived there with her husband until her death in 1954. The residence is located in St. Joseph, a city where the renowned architect worked on a few other projects. Wright even built another home in the late 1950s here, although it doesn’t have water views like Dr. Harper’s old place.

Like many of Wright’s works, the attention to detail is what really stands out. The home was built using tidewater cypress timber and Chicago common brick—two materials that the architect favored, so it looks undeniably like one of his projects—and the mahogany entrance doors have beautiful stained glass windows.

Another view of the living room  VHT

The home is designed in a slight “L” shape to maximize views of nearby Lake Michigan: You can catch a glimpse from the kitchen, sitting room, primary bedroom and home office. It’s been renovated a few times since its original construction date, too. The pitched and angled roof was replaced in 2012 with higher quality shingles, and the skylights were all upgraded in 2017. It also has a security system, so while it has all of the architectural appeal of a 1950s-era home, it’s been upgraded to suit contemporary living.

As a bonus, the home is being sold turnkey, including the owner’s abstract artworks in the entryway, the custom glass cocktail table, the Baldwin grand piano and other stellar furnishings from Scalamandre, Donghia and more.

A view of the grounds  VHT

If you’re interested in more Frank Lloyd Wright works, there are others currently up for grabs, including his famous Freeman House in Los Angeles. You won’t be the only collector of his combing the market for these sorts of listings, though, so best to snap them up now while you can.