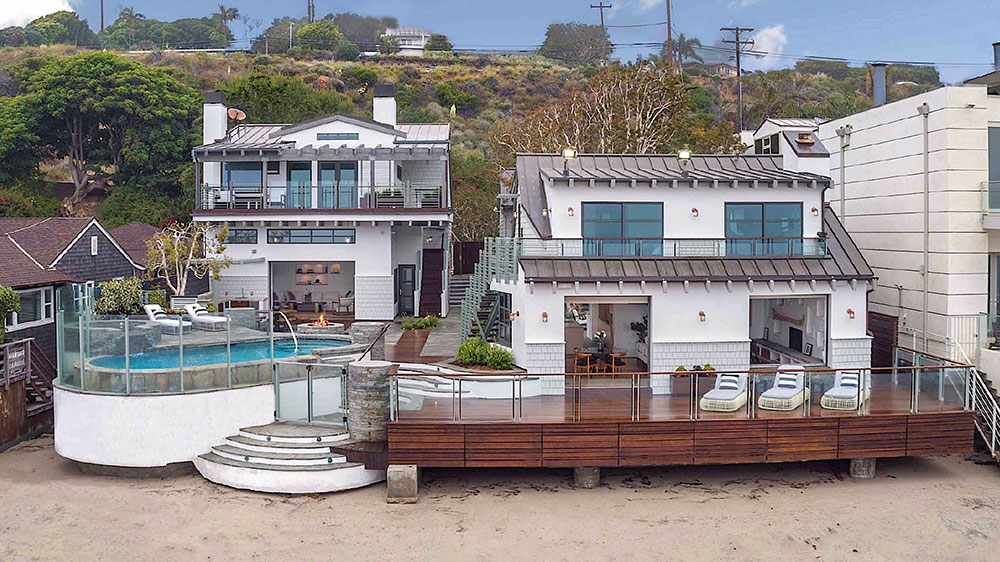 Back in 1999, Kevin Bright was at the top of his game producing the  sitcom Friends when he and wife Claudia splashed $2 million on an unpretentious ’50s two-bedroom cottage on Malibu’s coveted Broad Beach.

They leveled the place and brought in architect-to-the-stars Chris Sorenson to create a three-building compound on the half-acre lot that made the most of its 80 feet of prime Malibu beachfront.

The result? A spacious 4,190-square-foot retreat that, according to listing agent Robert Morton, of the Smith & Berg team at Compass Realty, defines quintessential California indoor/outdoor living. The home just hit the market for $13.995 million.

“With its far-reaching Pacific Ocean views from every room, this Malibu compound provides the ultimate seaside setting to live, relax and entertain,” says Morton.

For that relaxation, step out on to the multi-level terrace and maybe take a dip in the saltwater pool. Or head over to the outdoor kitchen and throw a steak on the built-in barbecue. Then maybe kick back in a lounger by the fire pit and, glass in hand, take in another spectacular Malibu sunset. Outdoor California living doesn’t get much better.

Over in the two-story main house you can relax in the white-washed living room with its two huge windows, each with slide-away glass panels, that overlook an oceanfront patio. A glass-sided staircase leads up to two bedrooms, each with ocean views.

On the pool level, a second building features a media room on the first floor, with the sprawling master suite on the second. Here there’s a large wrap-around terrace and floor-to-ceiling windows overlooking the pool and beach.

One of the patio areas.  Photo: Courtesy of Noel Kleinman/Compass.

The third building tucked away at the back of the property features a two-level fitness and meditation area with a self-contained guest suite on the second level. In total there are five bedrooms and five bathrooms.

The living room opens to the sea.  Photo: Courtesy of Noel Kleinman/Compass.

Interestingly, the Brights first listed the home around five years ago for the same $13.9 million, but took it off the market after a year. More recently, records show it was available to rent at $35,000 a month.

It was back in 1993 when a 38-year-old Kevin Bright formed a partnership with Marta Kauffman and David Crane to produce Friends for NBC. Bright went on to be executive producer for all 237 episodes of the much-loved series, including the season finale that was watched by more than 52 million viewers when it aired in May 2004.

One stumbling block for the sale of the producer’s home might be the growing concerns over continuing beach erosion, and the risk to the multi-million-dollar properties along Broad Beach.

In 2015, home owners, including A-listers Dustin Hoffman, Ray Romano and Pierce Brosnan, agreed to a planned beach renourishment project that would create a 100-foot-wide beach behind a 60-foot-wide sand dune system, to act as a buffer between the crashing Pacific and the homes.

A view to wake up to.  Photo: Courtesy of Noel Kleinman/Compass.

The bad news, according to the Malibu Times, is that the project will likely cost as much as $50 million every 10 years, with funding coming from owners of the 131 properties along Broad Beach. Including the Brights, or the new owners.