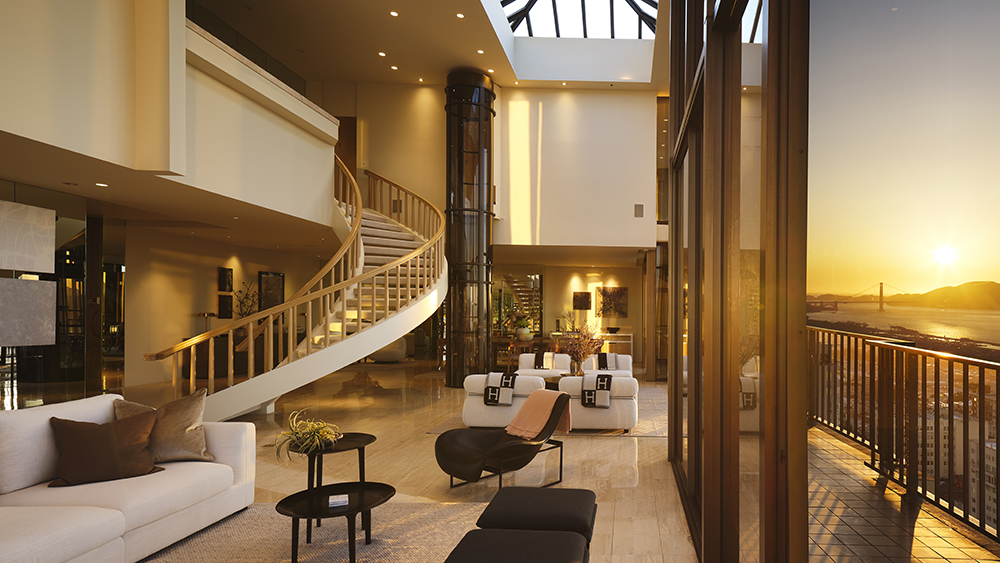 The former home of late Secretary of State George Shultz was just put up for sale, and as it you might expect, it’s much more luxe than your run-of-the-mill government accommodations.

The property, in San Francisco’s Russian Hill neighborhood, encompasses two adjacent penthouse apartments, spanning about 10,400 square feet in total. The north penthouse is asking $17 million, while the south is listed for $12 million.

Shultz and his wife, Charlotte Mailliard Shultz, used the north penthouse as their main residence, Richard Bohonsky, Charlotte’s friend and interior designer, told The Wall Street Journal. (Both Shultzes died last year.) That home includes three bedrooms, two wood-burning fireplaces, two wet bars and a wood-paneled study, according to Karen Mendelsohn Gould of Compass, who is marketing the properties along with her colleague Max Armour.

The dining area in the north penthouse  Brad Knipstein

In the other condo, which the Shultzes mainly used as a guest residence and entertaining space, you’ll find three bedrooms and a wraparound terrace with views of the Bay Bridge and the Golden Gate Bridge. “It’s like box seats at the opera,” Gould told the WSJ. “You have this perfect view.”

The Shultzes were big on hosting, and the homes provide the perfect space in which to entertain guests. The spiral staircases and steel-framed floor-to-ceiling windows in both units are absolute showstoppers, and they’ve been admired by everyone from former British Prime Minister Tony Blair to the singer Tony Bennett. Hallways connect the two residences, and one between the two kitchens was used frequently during parties. (Unfortunately, the homes can’t be combined because of their layouts.)

Charlotte bought the north penthouse with her then-husband in 1989 for $3.3 million. After she and George married, they bought the south penthouse in 1997 for about $5 million. Other changes the couple made to the homes include a catering refrigerator and two prep sinks in the south penthouse’s kitchen, a storage room with velvet-lined shelves for silver and a converted “gown room” that Charlotte used to store hundreds of dresses.

The living area in the south penthouse  Brad Knipstein

While it seems like the Shultzes’ San Francisco home has everything one could need, the couple also kept residences in Massachusetts; Mendocino County, Calif.; and on the campus of Stanford, where George was a fellow.

Check out more images of the properties below.

The kitchen in the north penthouse  Brad Knipstein

A breakfast nook in the north penthouse  Brad Knipstein

The entryway in the south penthouse  Brad Knipstein