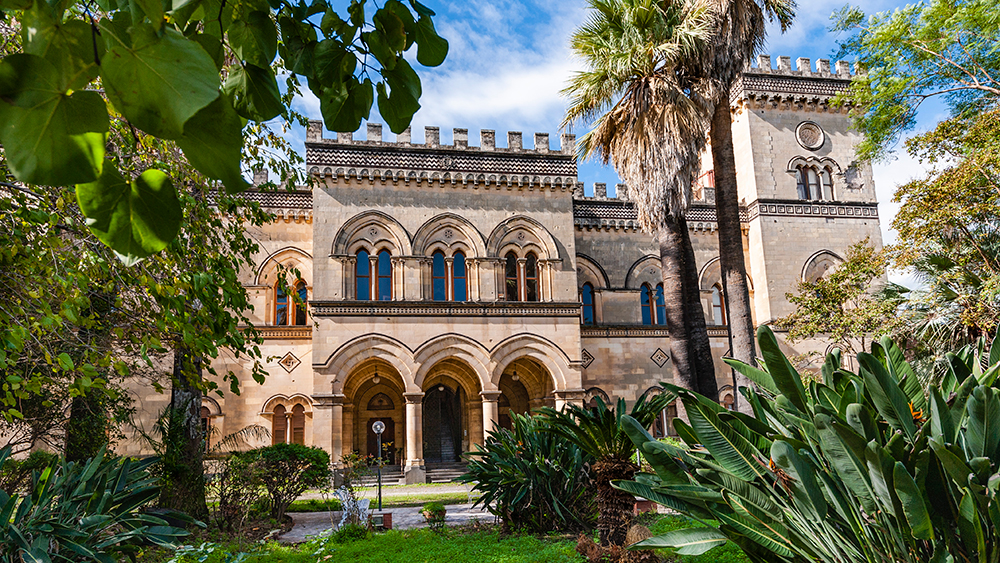 Film buffs, rejoice: An Italian castle that was reportedly one of the backdrops in Francis Ford Coppola’s The Godfather: Part III has just listed for $6.8 million. Not a bad deal considering the space—a sprawling, 43,055-square-foot property with a whopping 22 bedrooms and eight bathrooms.

The estate is located in the Catania area on Sicily’s east coast. It’s got quite the long history, dating back to the late 19th century, when Baron Agostino Pennisi di Floristella commissioned the project. It was designed by Giuseppe Patricolo, an architect who was best known for restoring medieval buildings in his hometown of Palermo. Fortunately for the next owner, Patricolo’s work stood the test of time in more ways than one: It survived both the destructive Messina earthquake in 1908 and bombings during WWII.

One of the living areas  Photo: Courtesy of Italy Sotheby’s International Realty

Today, the property still bears its benefactor’s name: It’s known as the Castello Pennisi di Floristella and was home to the noble Pennisi family for many years. It still maintains much of the original grandeur that one would expect from a historic Italian palace, starting with a massive marble staircase in the entryway (it leads to a portrait of the Baron himself, obviously) that’s coupled with a coffered ceiling above that still bears the Pennisi coat of arms.

Included in the layout is a private chapel, should you be the religious sort, with original frescoes by Italian painter Giuseppe Sciuti. Also on the property are a library and a wine cellar in the primary residence, plus a separate home for a caretaker.

While it’s a spectacular example of the neo-Gothic style architecturally, another key selling point lies beyond the castle’s four walls. The estate has its own private park, which has about two acres of trees and local flora. There are even palm trees leading up to the property, some of which surround a bust of—you guessed it—Baron Pennisi.

All in all, if you want to live like the Corleone family, it’s certainly a start. Check out more photos of the historic listing below:

One of the hallways  Photo: Courtesy of Italy Sotheby’s International Realty

The property is rife with trees and local flora and even has its own private park.  Photo: Courtesy of Italy Sotheby’s International Realty

One of the outdoor entertaining areas  Photo: Courtesy of Italy Sotheby’s International Realty