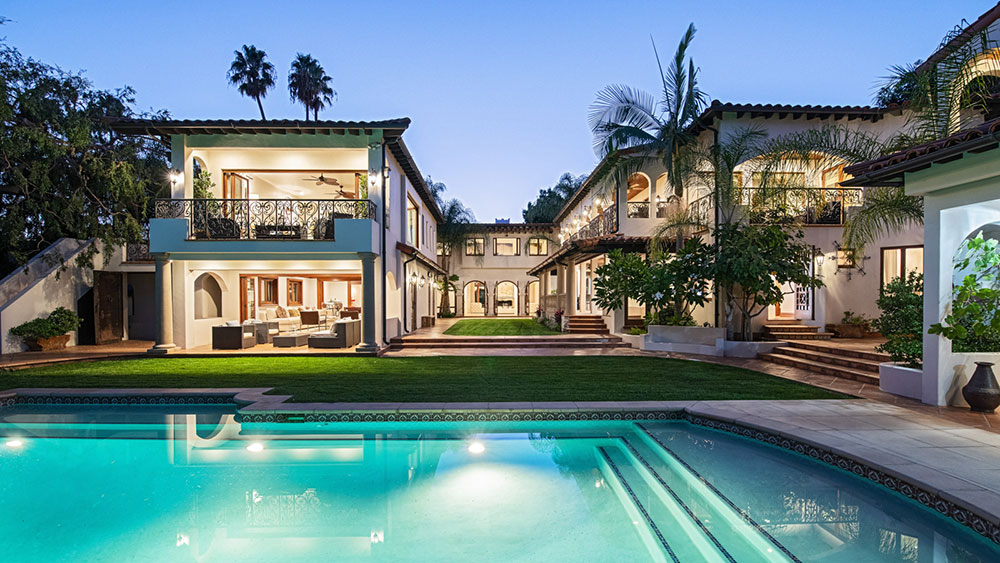 A spectacular 1929 Wallace Neff-designed Beverly Hills compound, once owned by one of Hollywood’s most beloved silent movie stars, is on the market for $15.75 million.

Located on Arden Drive’s coveted 700 block in the tony Beverly Hills Flats neighborhood a short stroll away from Rodeo Drive, the 10,000-square-foot estate is being offered for the first time since it was meticulously restored in 2011.

Neff is credited with creating the so-called “California” style with his sumptuous Spanish Colonial Revival designs. During his career, his client list included Hollywood A-listers like Charlie Chaplin, Groucho and Harpo Marx, Daryl Zanuck and Louis B. Mayer (as in MGM’s Metro-Goldwyn-Mayer).

The influential and prolific architect designed the Arden Drive home at the height of his career in 1929, a year after he completed the iconic redesign of Pickfair, the Hollywood mansion that was home to Mary Pickford and Douglas Fairbanks.

One of the Arden Drive estate’s most famous owners was silent movie legend Norma Talmadge, who bought the home in 1946 and lived there until 1952. A major box-office draw for more than a decade, she’s best-known for the 1922 Sidney Franklin-directed tear-jerker Smilin’ Through.

Records show the house was last sold in October 2012 for $9 million to Hollywood night club impresario Art Davis and his wife, the former model Cheryl Rixon.

Davis and his brother Allan were behind legendary West Hollywood celebrity hang-outs such as the Lounge, the Gate, the Play Room and Chi.

According to listing agent Madison Hildebrand of Compass, the year before Davis acquired the house, it had been extensively and expensively renovated, doubling its size and adding a stand-alone guest house with a state-of-the-art screening room.

The re-design also focused heavily on making the most of the Southern California climate by providing true indoor-outdoor living. Both the main building’s poolside family room and second floor master bedroom have full-width doors, as does the vast games room.

The home feels secluded but is just steps from Rodeo Drive.  Photo: Courtesy of Mike Helfrich/Compass

Private gates off tree-lined Arden Drive lead to an expansive tiled parking area and elegant porte-cochere. The house itself wraps around a central grassy courtyard on three sides and features six bedrooms and nine baths.

Imposing doors take you into a stunning, double-height, entry hallway with its curved, painted-tile staircase. The adjoining reception room is also double-height and features a wood-beamed ceiling and wrought-iron balustrades for the walkways.

Architectural details were preserved in the recent renovation.  Photo: Courtesy of Mike Helfrich/Compass

Many of the Wallace Neff design features are retained and restored, like the intricate ceiling woodwork in the dining room, reception and family rooms.

The second-floor master suite almost defines the Golden Age of Hollywood with its full-width doors opening on to a wide balcony with intricate wrought-ironwork.

One of the master suites.  Photo: Courtesy of Mike Helfrich/Compass

But for the owners, actually choosing where to sleep could prove a challenge as, in the adjoining wing of the home, a second master suite with a pitched, wood-beamed ceiling is equally opulent and spacious.

The expanded, open-plan kitchen features a huge granite-topped island and professional-grade appliances plus, for all those glamorous dinner parties, there’s a separate, hidden chef’s kitchen with its own service entrance.

Alongside the pool, the new guesthouse features a true Hollywood-style screening room with rich, dark-red leather sofas and red wall coverings. Above it, there’s a spacious guest bedroom.

While Davis and his wife no longer live in the house, records show it’s been leased in recent years for between $75,000 and $80,000 a month.

“This architectural gem from the Roaring Twenties is now ready for new owners as we head into the 2020s,” says Hildebrand, who shares the listing with Ginger Glass, also of Compass.

A sitting room off the master suite.  Photo: Courtesy of Mike Helfrich/Compass