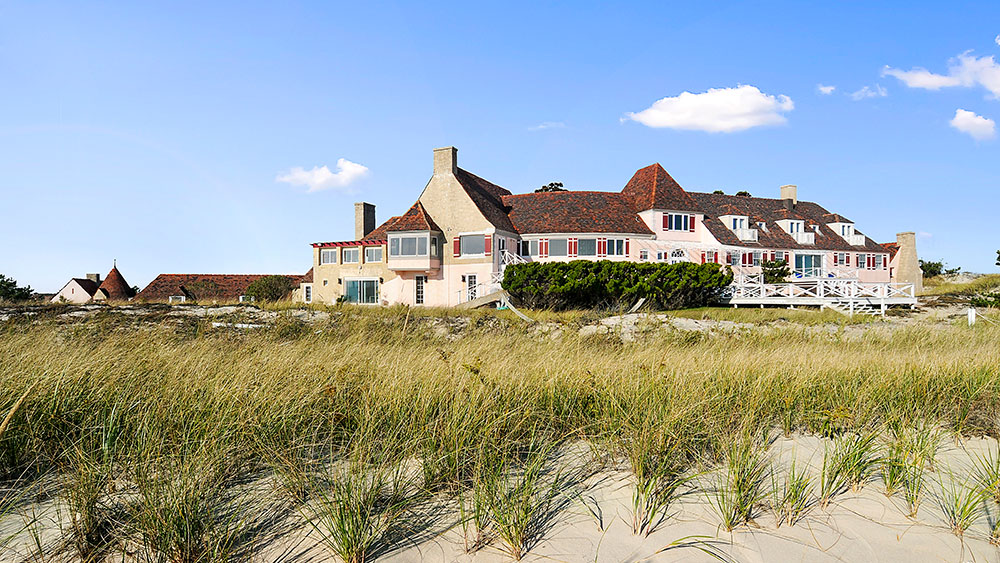 Photo: Courtesy of The Corcoran Group

It always pays to have a beach house. If you’re going to snap one up, then, best to go big and get one of the Hamptons’ prime offerings. Luckily, an eight-acre estate on Southampton’s tony Meadow Lane has just listed for a cool $75 million—great for a weekend getaway or family gathering.

It’s a home with a long history. It was originally built for businessman William F. Ladd in 1929. Architecture firm Peabody, Wilson and Brown designed the place; it was one of many Hamptons homes on their résumé. And yet this particular residence—dubbed Oceancastle for its proximity to the sea—required a bit more finesse to create. It’s built on top of a series of sand dunes, so there are subtle shifts in the floor levels and many turns and bends in the overall layout.

The living room  Photo: Courtesy of The Corcoran Group

Altogether it’s a roughly 22,000-square-foot parcel. According to an old article in The Southampton Press, Oceancastle “looks less like an individual house than some small seaside village in Normandy.” Another architectural quirk: The “stone” walls are in fact not stone at all, as there wasn’t any on the island at the time. The architects used a mix of sand and cement instead.

There are a whopping 15 bedrooms—seven have ocean views—and two game rooms for days when the weather is gloomy and you can’t hit the beach. A separate staff wing houses an additional four bedrooms, and the living room has spectacular vaulted ceilings and a fireplace. The library looks out onto the ocean, and there’s an additional outdoor deck for soaking up the sun or hosting friends for a summer barbecue.

The library  Photo: Courtesy of The Corcoran Group

The property has a few other assets, too. In addition to the historic home, there is an outdoor tennis court and pool on the grounds, as well as 500 feet of private beach frontage.

It’s got some notable neighbors as well, including hotelier Ian Schrager and hedge-fund manager Ken Griffin, who bought Calvin Klein’s old place. There has been a boom in the Hamptons real-estate market as of late, with sales surging for the third straight quarter and increasingly limited inventory, according to a Douglas Elliman report.

The deck, which looks out onto the ocean.  Photo: Courtesy of The Corcoran Group

Still, there are challenges with buying such a storied listing. Listing agent Tim Davis of Corcoran Group told The Wall Street Journal that he expects the new owner to undertake a “considerable renovation and restoration” of the home.

Check out more photos of the Hamptons listing below:

The pool  Photo: Courtesy of The Corcoran Group

An aerial view  Photo: Courtesy of The Corcoran Group

The tennis court  Photo: Courtesy of The Corcoran Group