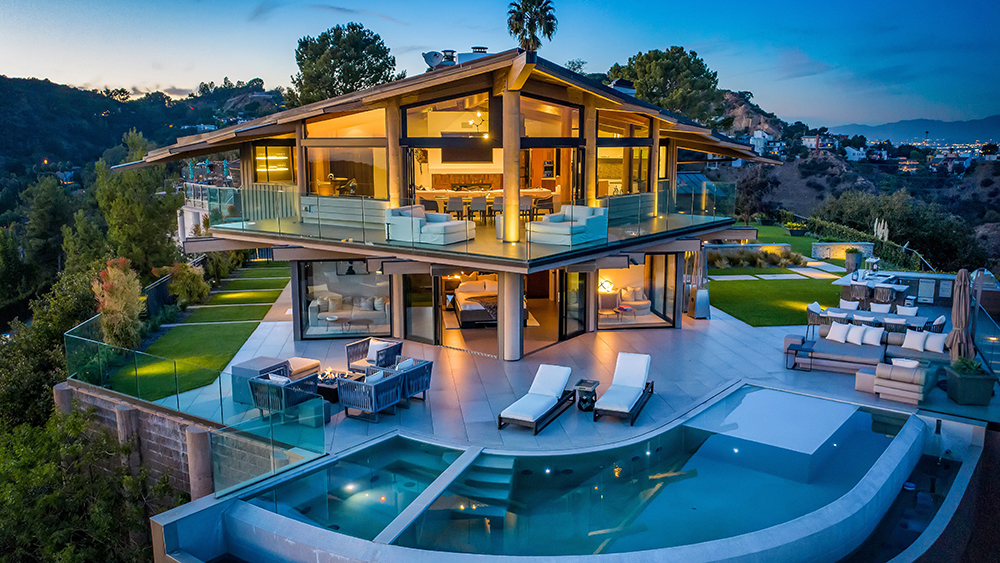 Noel Kleinman for the Oppenheim Group

Few can claim ownership of a home designed by Harry Gesner. The self-taught architect was among one of the most sought-after modernist talents in Los Angeles at one point, and his resume includes the Wave House in Malibu, a residence that famously inspired the Sydney Opera House’s curvy façade. Now, there’s a rare opportunity to snap up one of the midcentury architect’s homes—more specifically the Flying Wing House, a Hollywood Hills manse that looks like a big wooden bird or plane perched on a hill—for $8 million.

The home, which is about 4,500 square feet, has the same angular look as many of Gesner’s designs, though in this case the inspiration likely had more to do with family history than midcentury aesthetics. Gesner’s uncle was John Northrop, the inventor of the “Flying Wing” airplane, a prototype that never made its way to production but still made waves for its design, which looked like one big wing. Little did Northrop know that his 1940s idea isn’t too far off from where we are now, with similarities between his sketches and the new, fuel-efficient “Flying-V” jet.

Gesner was commissioned to design this Flying Wing house by Mike Hynes, a lumber mill owner. According to the Los Angeles Times, Hynes wanted a home that would show off his company’s wood—hence the abundance of timber in the construction. That was in the 1970s; it’s now owned by the estate of Erick Morillo, a DJ who passed away in September. He’s perhaps best known for writing the hit song “I Like to Move It.” There’s even a fully equipped recording studio on the property—a separate building from the main residence—where you can record your own chart toppers.

The bar.  Noel Kleinman for the Oppenheim Group

The expansive glass-and-wood residence sits on about an acre of land, perched atop a promontory with amazing, 300-degree views of Los Angeles. There’s parking for about six cars on the site, as well as an infinity pool and space on both the upper and lower levels of the home for outdoor entertaining.

The recording studio.  Noel Kleinman for the Oppenheim Group

The four-bed, six-bath home hasn’t just been collecting dust for the past 40 years, either. Architect Dean Larkin remodeled the place in 2014, adding an LED-lit staircase and a water feature at the entrance and, more recently, listing agent Jason Oppenheim reportedly invested more than $100,000 in sprucing up the place.

The dining room.  Noel Kleinman for the Oppenheim Group

It’s a home that appeals to the disc jockey, the architecture buff or a bachelor in equal measure. Who knows, maybe it will serve as inspiration for another famous building some day, like the Wave House did, and you’ll be able to say you own the original.

Check out more photos of the architectural digs, below:

The garage.  Noel Kleinman for the Oppenheim Group

One of the bathrooms.  Noel Kleinman for the Oppenheim Group

The view.  Noel Kleinman for the Oppenheim Group