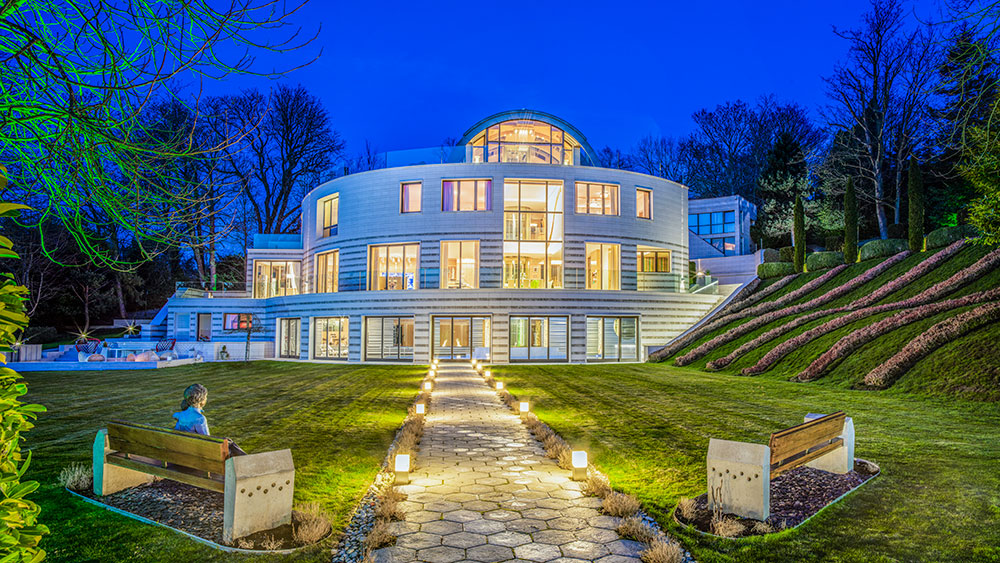 London addresses don’t come more coveted than Highgate, a quick chauffeur-ride northeast of the capital. Supermodel Kate Moss calls it home, as does actor Jude Law. Rocker Rod Stewart was born and raised here. Now, one of the most-coveted homes in this pricey ‘burb has just hit the market for £40 million, or roughly $51.8 million.

The reason for this ambitious asking price? Heathfield House is a stunning, 10-bedroom architectural gem that sits on two secluded acres on tony Merton Lane, a stone’s throw from Hampstead Heath, one of London’s most-beloved parks. The home itself was designed by acclaimed architect, Alan Powers, one of the UK’s leading experts in 20th century contemporary design. A professor at the University of Greenwich, he wrote The Twentieth Century House in Britain.

Reached through imposing wooden gates and along a winding paved driveway, the main house features a stunning glass rotunda at the entryway, and a breathtaking semi-circular design at the rear. Set on three floors, the home has one incredible crowning glory, literally—a rooftop glass dome containing a stunning den/office with a barrel ceiling and access to a teak-planked, wrap-around rooftop terrace.

Take the central, glass elevator down to the ground floor of this circular section of the home, and there’s a huge, curved indoor swimming pool overlooking expansive manicured lawns. A path leads across to the home’s tennis court and spa.

The ground/first floor features the expansive living area with its huge 61-by-38-foot reception, again overlooking the lawns. There’s an adjoining study and sitting room, a huge kitchen and breakfast room. The dining area is equally impressive as it features a two-story glass atrium above that floods the area with light. That’s when the sun is actually shining in London.

Take the spiral staircase in the rotunda, or the glass elevator, and you enter the second floor and the sleeping level. There are five spacious bedrooms here, including the master off to one side with its separate dressing room and large bathroom suite.

What looks like a separate mini-mansion opposite the front door to Heathfield House is in fact the home’s three-story, four-bedroom, 4,400-square-foot guest house. Or, as the current owners call it, the Lodge.

Beneath is a five-car garage with stairs leading up to the second floor with two ensuite bathrooms, another sitting room, and an adjoining security or “panic” room. Up more stairs to the third floor and there are three more bedrooms, a kitchen, living room, and a kitchen breakfast room.

“This really is an exceptional, contemporary mansion in a very sought-after location. Yet with its two wooded acres, it is a serene oasis in the heart of Highgate,” says Lee Koffman, of Sotheby’s International Reality UK, who holds the high-profile listing.