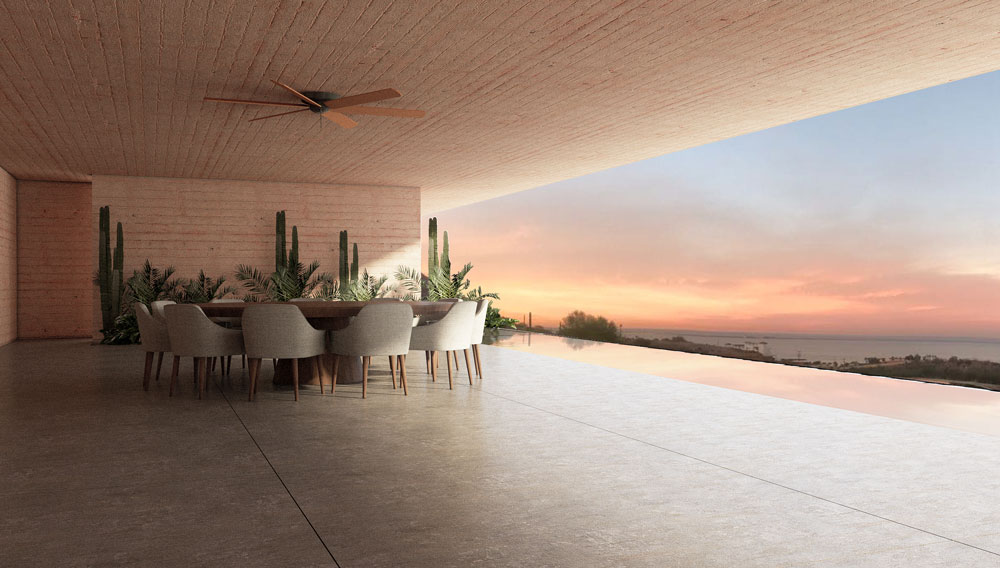 Located just two hours by boat from the Baja California Sur coastline, the protected UNESCO biosphere is tranquil, beautiful, and ready for exploration. With just a simple national park permit, anyone can jump off-board a boat or yacht and venture around 31 square miles of uninterrupted Mexican desert encircled by sparkling waters. Back on the peninsula, La Paz (with a population of around 250,000) features a busy “El Centro” core with dozens of boutiques, taquerias, and small shops that offer the opportunity to participate in the artful and spiritual community.

The combination of quieter living and near-perfect weather has attracted entrepreneurs like Jeffrey Curtiss, a Brit who journeyed to the region because his son James decided to open a dive school in La Paz. Curtiss spent nine days being a self-described “beach bum” while James was on a diving trip offshore. “I was completely taken aback by what I saw,” the elder Curtiss says. “It felt like paradise lost in time with the nicest people on earth, very natural food, and a genuine delight to be here.”

Once he sold his business in the UK, Curtiss decided that he’d take on a new endeavor: building high-end residences right on the shoreline of the Sea of Cortez. In 2011, his vision came to life with Playa de La Paz – a 23-unit building with two- to five-bedroom residences ranging from 3,000 square feet to 8,000 square feet.

The imported woodwork and general craftsmanship is reminiscent of a Palm Springs resort, but with distinctly Mexican detail. With largely open floor plans and expansive bedrooms, kitchens, and private patios, Curtiss’ project brings many of the comforts that buyers in this price range ($1.2 million to $3 million) expect. He loves to showcase Playa de La Paz to those who make the trek to this paradisiacal part of the world and is quick to note the relaxed lifestyle. “Those who get a taste of it want to live here,” Curtiss says.

And now, a snapshot of modern design is going up right next door as developer Antonio Dávila renovates the CostaBaja Resort & Spa into Puerta Cortés, a world-class golf destination that will look more like an art installation than a traditional course thanks to its rugged design and highly stylized ridgetop clubhouse. The golf amenity renderings are striking: sharp modern lines wrapped in tans and beiges that offers a backdrop reminiscent of a contemporary art museum. It’s a welcome departure from other, newer projects in the Cabo area and will certainly appeal to the adventurous and sea-faring clientele he hopes to attract. (The golf portion will be renovated over the next 12 months, while additional buildings will be built over the next couple of years.)

Dávila discovered the area in the most perfect of forms: on a sailboat on the Sea of Cortez on New Year’s Eve in 2013. “I was completely bedazzled by the experience,” he says. “It was authentic, and a place where I could simply enjoy the water and the sea.”

He stayed at the resort for a week and was sold on the clubhouse, existing high-level golf course, and marina. Inspired, Dávila bought a home and began enjoying the lifestyle. A few years later, the opportunity arose to purchase most of the resort. Dávila worked with large-scale development company Ascendancy and bought the property in February 2018.

Soon after, they began an analysis of how to create an elevated private retreat. “There is no doubt about the superiority of the sea here,” Dávila says. “The masses can go to Cancun and Cabo, but this place must remain sacred and protected.”

Beyond all of the natural beauty, perhaps the most attractive offering is the sheer number of amenities available within the Puerta Cortés complex. Yachters can disembark and enjoy a village of high-level dining, private beach access, and, of course, golf. With all of this being within a two-minute golf cart ride from the slips, it’s a full-service setup that’s attracting wealthy visitors as a last pit stop before sailing to Central and South America.

The members-only grill on the property.  Photo Credit: Enrique Martin-Moreno and Lucio Muniain

“The world-class bones of the project had been built and we saw the opportunity,” he says. “We’re just giving it a little push.”

The centerpiece of Puerta Cortés is the Gary Player-designed golf course that spans the grounds from end to end. In what has to be one of the country’s most scenic courses, every hole was thoughtfully chiseled into the hillside during the initial investment. (As one of the initial projects, Dávila and his team are elevating the main clubhouse and halfway house into premier facilities with noticeably contemporary architecture.)

The overall result is a playground with a sea view from almost every hole. One of the longest par fives in Mexico was integrated in Hole #14, which has a dramatic 200-foot drop-off from tee to fairway (heralded with the sea’s glassy blue backdrop as you watch your drive sail into the Baja breeze). To put the size of the course in perspective, 72 residences were built between holes eight and 10, while a growing number of grandiose private estates (in the $3 million to $4 million range) are located in the hills. (As a testament to the growing popularity, there are just 33 of 78 higher-end estate lots remaining, with two new homes slated to begin construction soon).

While both Puerta Cortés and Playa de La Paz are attracting new attention to the area, Curtiss and Dávila are both committed to preserving the heritage and natural beauty of the region.

“[La Paz is] a place for turtles, rays, corals, snorkeling, hiking,” Dávila says. “This becomes a place with never-ending adventures.” He adds that it will be crucial to responsibly grow tourism while also interacting with the local community. Of course, it’s the quintessential balanced Baja lifestyle that drew people like Dávila and Curtiss here in the first place.

“This is a place where the local people were the friendliest I had ever experienced—a place that was truly paradise,” Curtiss says. “La Paz is peace on earth.”

The interiors open to a balcony that overlooks the water.  Photo Credit: Marc Angeles