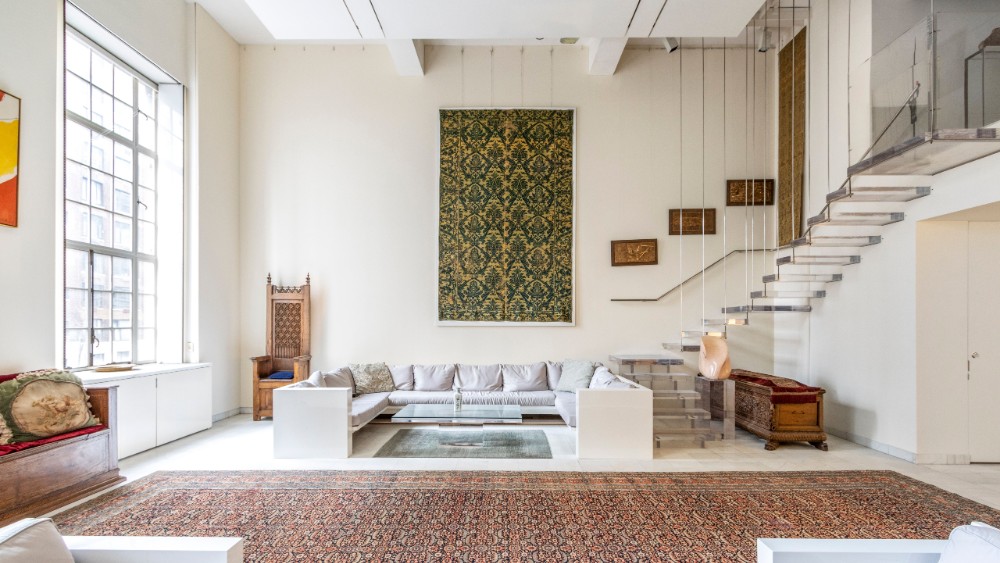 This duplex apartment in New York City’s Midtown East neighborhood is like a design-lover’s time capsule.

For the first time in 50 years, Unit #4/5B at 322 East 57th Street is on the market for $3.5 million after its former owner, Dr. Vallo Benjamin, a New York neurosurgeon, sadly passed away last year. Dr. Benjamin owned the apartment for almost 50 years, so this is the first time in half a century that outsiders are able to see what the interiors look like.

The building has 18 co-op apartments, each which are duplex (save the penthouse, which is a triplex.) This unit features double-height, 19-foot ceilings and two 14-foot casement windows that let in plenty of natural light. Like other units in the building, #4/5B has a generous open floor plan with a very spacious living room, formal dining room and solarium. It also has three bedrooms and three bathrooms on the upper level, as well as a sauna.

“In the apartment, Rudolph separated the old from the new,” says Maria Torresy, co-listing agent with Brown Harris Stevens, who has lived in the building since 1970. “The lucite furniture contrasts with the 15th- and 16th-century chairs and rugs. Rudolph used transparent materials to create an apartment in which walls, floors and ceilings tend to disappear. A lucite staircase, suspended on stainless-steel rods, connects to the double-height living area, with white walls and dropped ceiling panels that conceal lights. A vertical wall at the back looks nearly incandescent when the lights are turned up.”

Torresy adds that Rudolph created a bathroom using Brazilian marble and a solarium that cantilevers beyond the edge of the building, and also incorporated stained glass windows. One of the bedrooms is designed in a circular shape with faceted mirrors. Other features that remain from the 1970s include the brick-floor kitchen with wooden cabinets and built-in bookshelves.

“The wood-burning fireplace in the living room is rumored to have been from William Randolph Hearst’s estate,” says co-listing agent Julianna Simmons. “With the help of Rudolph, this apartment also has a clear idea of the organization of space. The architecture and the art work in harmony.”

Architect Paul Rudolph designed a faceted mirror ceiling in one of the bedrooms.  Brown Harris Stevens

The prewar building, completed in 1930, is itself an architectural gem with a lovely neoclassical limestone facade. It’s a full-service co-op with an elevator and a doorman and is noted by many as one of the most prestigious buildings in the city. It has been known for attracting literary figures, designers, architects, artists and actors, which have included New York Magazine founder Clay Felker, Art Deco painter Tamara de Lempicka and French actress Lily Pons. It is even rumored that Orson Welles once lived in the building.

One of the bedrooms even features a wood-paneled library.  Brown Harris Stevens

The bedrooms are located on the upper floor.  Brown Harris Stevens

The lucite stairs appear to be floating.  Brown Harris Stevens