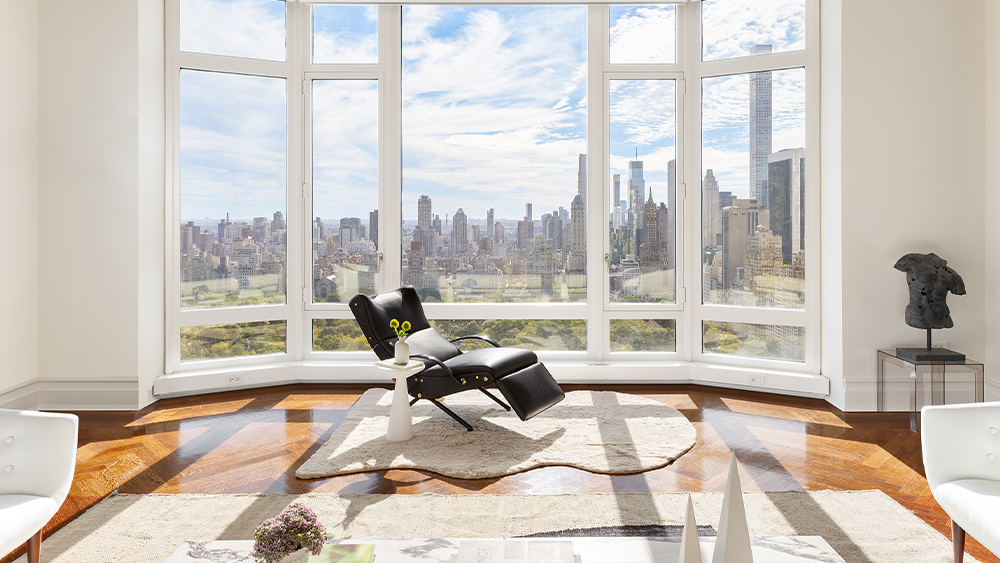 In a city filled with marquee luxury residential towers, few buildings have become so prominent as quickly as 15 Central Park West. Designed by Robert A. M. Stern and only completed in 2008, the limestone-clad stunner is not just filled with star-studded names: It also helped establish Manhattan’s iconic Billionaires’ Row. Folks including Sting, Denzel Washington and Jeff Gordon have all called this tower home—as did renowned cartoonist Ranan Lurie, whose apartment has recently hit the market for $28 million.

Set on the building’s 36th floor, the three-bedroom, three-and-a-half bathroom condo is spread over nearly 3,200 square feet. Owner Lurie, who died this past June, was an Israeli-American cartoonist who was known for drawing literally hundreds of world leaders—from Barack Obama to Benjamin Netanyahu. His politically tinged cartoons were also heavily syndicated in newspapers across the globe. According to Lurie’s obituary in The New York Times, “At his peak, Mr. Lurie’s evocative caricatures appeared in about 1,000 publications with more than 100 million readers in 100 countries, setting a benchmark in the Guinness Book of Records in the 1980s.”

Lurie’s home was a testament to the cosmopolitan, art-filled world he both drew and inhabited. “The apartment was my father’s pride and joy, and my parents lived in it fully,” says Compass agent Danielle Lurie, who is also Ranan’s daughter. “My father used it as a home in which to create as well as entertain world leaders, dignitaries and fellow creatives, and welcome their kids and eventually their grandkids.”

The cartoonist was as hands-on with this apartment as he was with his artistic endeavors. The unit is the only one on the building’s “D-line” to feature Central Park views, and Ranan kept the focus squarely on the greenery. This required shifting the home’s original layout to turn part of the home’s east side into a sunny studio. “He transformed what was a hallway into a gallery space, creating a canvas for art and light,” Danielle explains. Walls were removed and replaced with oversized windows that allow for panoramic views of Central Park from almost every vantage point in the Great Wing, “including right when you walk in,” she adds.

With its endless angles and chic white-washed walls, the home—which Ranan purchased directly from the developer before it was completed—is a contemporary counterpoint to Stern’s prewar-inspired exterior architecture. And capped by 11-foot ceilings, the home has a cool gallery-like feel that complimented the artist’s creativity. Indeed, although nearly all the family’s private and personal effects have been removed, stager Rochelle Klein—who helped prepare the condo for sale—actually kept a handful of Ranan’s favorite artwork to set the tone for her interiors scheme.

“She kept two paintings my father did of my mother, for example, along with an artifact signed by Napoleon—a tribute to two of my father’s passions: his love of history and his love of my mother,” Danielle says.

The condo receives park views from both its expansive northern exposure as well as from east. The sights also extend to the west, where you can see the Hudson River from the primary bedroom, which includes a marble en suite bathroom with a soaking tub, a shower and a walk-in closet. This set-up, in effect, transforms Central Park into a backyard of sorts, with main areas in the home such as the library, the great room, the dining room and one bedroom each having stellar landscapes outside their window. The foyer and gallery also look out onto the greenery below.

“My father found Central Park to be an incredible art piece and wanted to have it framed by as many windows as possible within his home,” Danielle says. In total, there are three bedrooms—each with their own bath and range of enviable scenery.

Having hosted creative and political luminaries as well being the sight where Ranan created some of his most memorable drawings, the home stands as a testament to a life very, very well-lived. Now with her father no longer with us, Danielle says, “it is time to find the next owner who will find as much magic in this space as my parents did.”

See below for more photos of the Lurie home at 15 Central Park West: