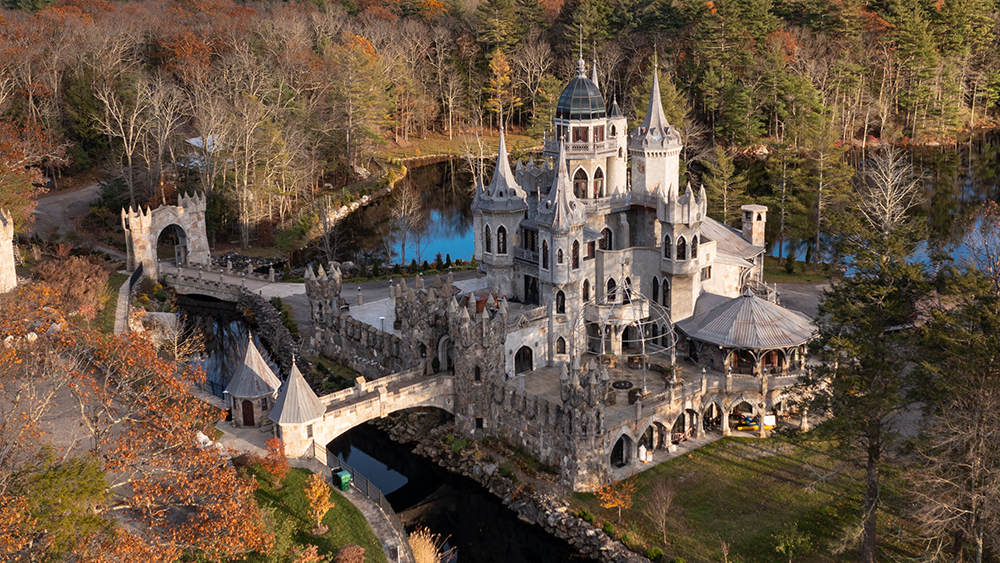 As youngsters, Chris Mark’s two daughters reportedly loved to dress-up as little princesses. So, as any proud parent does, he built them a fairytale castle complete with turrets and towers, along with a moat and a drawbridge.

To make sure there was enough room for everyone, Mark, great-grandson of Chicago steel tycoon Clayton Mark Sr., designed the 18,777-square-foot castle, roughly 40 miles from Hartford, with eight bedrooms, nine bathrooms and seven different levels. Naturally the basement featured a theater with a stage, lights and music for his daughters to perform.

Now, after first listing Chrismark Castle for an ambitious $45 million in 2014 and removing it from the market in 2016 (by which time the asking price had dropped to $32 million), Mark is testing the waters again with a still-lofty $35 million price tag.

The drawbridge to the front door.  Photo: Tyra Pacheco

Pizzi explains that construction on the castle kicked off in 2003 after Mark had spent two years traveling through Europe. There he had gathered materials from old churches, French chateaux and architectural salvage yards, shipping them back to the US in a multitude of containers.

He also imported rare hardwoods from around the world—more than 25 different species are represented—and enlisted a local Connecticut boat builder specializing in restoring wooden yachts to hand-carve the doors and moldings and lay the floors. Mark even bought a local iron foundry for its specialized metal-working equipment, so that they could create intricate wrought-iron gates, windows and staircases.

“During the seven-year build process, more than 100 artisans, mainly from Russia, Poland and the Czech Republic, were flown-in to help with the construction. The craftsmanship is just astonishing,” says Pizzi.

The castle itself is built on a peninsula that juts out into the 30-acre, tree-lined Potter Pond. One end of the peninsula was excavated to create the moat, which is spanned by a pair of castellated stone bridges.

Seems that during the build process, Mark also acquired a total of 400 acres of surrounding land. While the current listing includes “only” 75 acres, more land can be made available if a buyer was interested, says Pizzi.

The kitchen has views of the lake.  Photo: Tyra Pacheco

Of course, being a fairytale castle, the home is not short of an eccentric feature or two. The master bathroom has soaring tree trunk supports, a huge jacuzzi tub filled by a cascading rock waterfall and steam outlets, while the soaring, domed observation room has a glass floor that looks down into the master bedroom 40 feet below. And yes, there’s a couple of secret passageways and even a dungeon.

Flip through Mark’s website for the property and you’ll come across a few more of those eccentricities. Like the castle’s use as a backdrop for daughter Christina Mark’s high-energy TikTok videos, a number of music videos and fashion shoots and a recent heart-warming Hallmark Channel movie called One Royal Holiday.

At one time, the castle even boasted its own private zoo for the daughters that included a zebra, several emus and a pair of camels called Abu and Habibi, who are reportedly still around.

Mark’s passion for collecting also shows in the fleet of old military vehicles, fire engines, ambulances and antique farm equipment housed in various barns and buildings around the property. There’s even an ex-Navy fighter jet, sadly non-operational, that’s parked under trees in front of the home. According to Pizzi, Mark is open to offers for the items.

Inside the castle, other stand-out features include a sprawling, semi-circular kitchen with180-degree views of the lake, stunning inlaid wood floors throughout, no fewer than 12 fireplaces, a carved, wooden spiral staircase and a medieval-style formal dining room. In the grounds, there’s a swimming pool and boat dock.

“Of course, such a specialized property is not going to be for everyone,” says Pizzi. “It’s probably only going to appeal to a buyer looking for something unusual, unique and extraordinary. Someone who really wants to live like a king, or queen, in a real-life castle.”

Check out more images of the home below:

Many of the materials were sourced from Europe.  Photo: Tyra Pacheco

The wood was carved by local artisans.  Photo: Tyra Pacheco

Another view of the exterior.  Photo: Tyra Pacheco