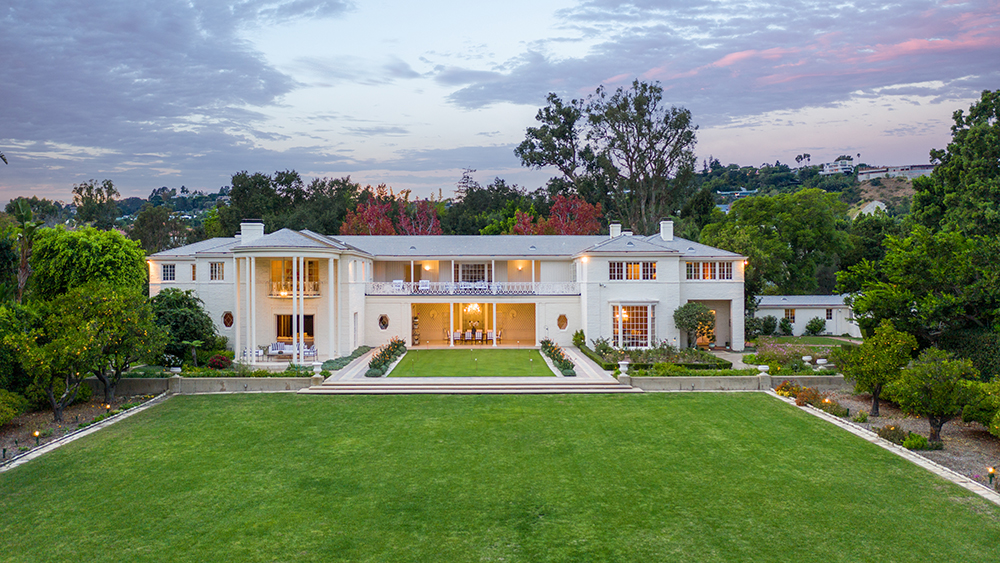 Photo: Courtesy of Hilton and Hyland

Checking in to this Hilton should guarantee you a few more amenities than turndown service and fresh towels.

This particular Hilton property, in the swank Holmby Hills neighborhood of Los Angeles, is the historic former home of legendary hotelier and philanthropist William Barron Hilton, who died last year at age 91.

Owned by Hilton for more than 50 years, the estate is now being sold for $75 million by the Hilton family. Interestingly, the sale is being handled by Barron Hilton’s son Rick Hilton and grandson, Barron N. Hilton, both of leading LA realtors firm Hilton & Hyland.

Part of the home’s considerable appeal is that it was designed in 1936 by Paul Revere Williams, a pioneering Black architect who designed homes for Hollywood elite such as Frank Sinatra, Barbara Stanwyck, Lucille Ball and Tyrone Power.

Still known as the Paley House, this 15,000-square-foot Georgian Colonial-style mansion was commissioned by Jay Paley, whose family founded the Columbia Broadcasting System, better known as CBS. Paley owned the estate until his death in 1961.

Barron Hilton, son of Hilton Hotels founder Conrad Hilton, reportedly snapped up the trophy home in the early ’60s for $475,000, equivalent to around $4 million today.

One of several living rooms on the estate.  Photo: Courtesy of Hilton and Hyland

Even back then, this 2.55-acre estate occupied a coveted location, close to Bel-Air and Beverly Hills. Within walking distance was the estate of Warner Bros. studio chief Jack Warner, bought in March this year by Amazon’s Jeff Bezos for a record $165 million.

For architecture lovers, the home is special in that during its 84 years, no major structural changes—in fact few changes in general, just open-checkbook maintenance—have been made to the house.

The formal dining room. The many original architectural details have been beautifully preserved.  Photo: Courtesy of Hilton and Hyland

According to Rick Hilton, most of the Paul Williams design features, such as the curved, floor-to-ceiling paneled windows, the metal sliding doors, the sweeping staircase and circular breakfast room, are still in place.

One truly spectacular feature of the house is its so-called “zodiac pool.” Designed by Williams, this near Olympic-size swimming pool features thousands of multi-colored tiles, hand-painted in France. The mosaic incorporates the 12 signs of the zodiac in exquisite shades of turquoise, gold and blue.

Two primary suites fill out the 13 bedrooms.  Photo: Courtesy of Hilton and Hyland

Overlooking the pool is the spacious Moderne-style pool house, again designed by Williams and featured on the cover of Architectural Digest magazine in 1933.

“Every time I drive up to the house, it takes me right back to my childhood, the memories of Thanksgiving dinners and Christmas parties,” says 31-year-old Barron N. Hilton, whose sister is socialite Paris Hilton.

One of 17 bathrooms in the home.  Photo: Courtesy of Hilton and Hyland

In a video accompanying the listing, Barron’s father and Hilton & Hyland cofounder Rick Hilton, 65, remembers the legendary parties with as many as 1,000 guests filling the lawns and tennis court.

“One party that comes to mind is when we sold the Beverly Hilton to Merv Griffin. He got up to toast my father and said, ‘Barron Hilton has touched a lot of people in this room—he touched me for over $100 million.’ The whole crowd went crazy.”

The “zodiac pool” was also designed by the home’s architect, Paul Revere Williams.  Photo: Courtesy of Hilton and Hyland

Imposing wrought-iron gates off Brooklawn Drive open to a driveway and circular motor court in front of the two-story, white brick main house with its Bel-Air-meets-Georgian-Colonial-style facade.

Steps lead up to towering double doors and into a foyer with its trademark Paul Williams-designed sweeping staircase. A high-ceilinged hallway runs the entire length of the house, with a multitude of entertaining rooms.

The pool house graced the cover of Architectural Digest in 1933.  Photo: Courtesy of Hilton and Hyland

Perhaps the most impressive of the home’s 32 rooms is also one of its smallest. The 200-square-foot, dark-wood-paneled study with its hexagonal window acted as the home office for two great business titans, CBS’s Jay Paley and Barron Hilton.

The tennis court.  Photo: Courtesy of Hilton and Hyland

Upstairs there’s a total of 13 bedrooms, including not one but two master suites, each with views of the lawn, putting green, ornamental koi pond and pool. The home has 17 bathrooms.

Before he died, Barron Hilton pledged 97 percent of his considerable wealth—estimated at $4.5 billion—to the Hilton family foundation and earmarked it for humanitarian work. The estate is said to be in the three percent he kept.

“I think this is more than just a home, it is a work of art, a true part of history,” says grandson Barron N. Hilton.

The patio.  Photo: Courtesy of Hilton and Hyland

The pool house and lawns. The home was originally built for CBS founder Jay Paley.  Photo: Courtesy of Hilton and Hyland