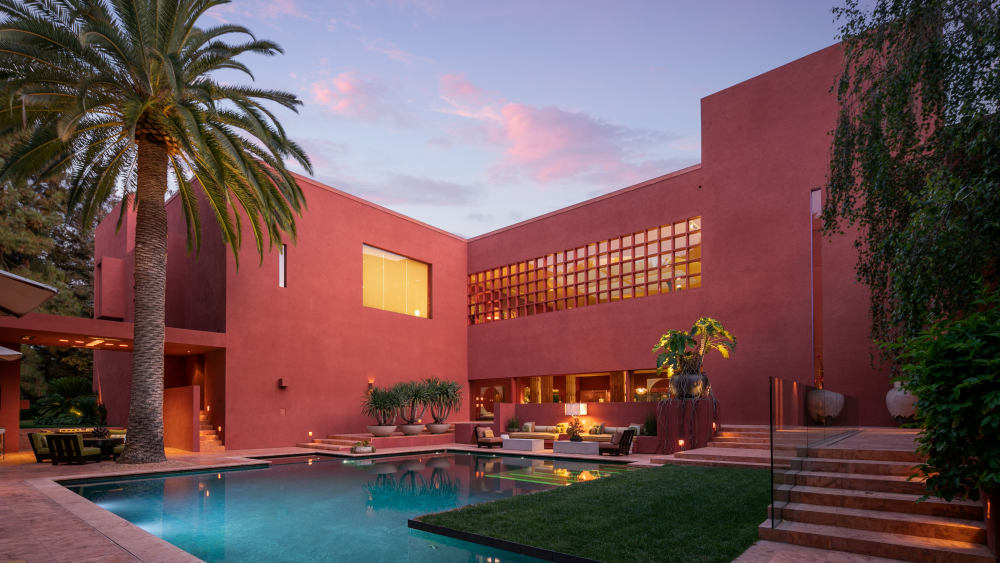 In a market of minimalist box-shaped homes with black and white marble floors and countertops, a residence like 470 Layton Way really stands out. Located in the heart of Brentwood on LA’s west side, the opulent 26,000-square-foot mansion plays with multiple geometries. It sits on five acres of land at the very back of a gated community—though it’s not just the numbers that make it a standout: The $77.5 million address is one of the only private residences designed by revered Mexican architect Ricardo Legorreta in all of Los Angeles.

“The owners are real architecture devotees,” listing agent Judy Feder of Hilton & Hyland tells Robb Report. “They have two Frank Lloyd Wright homes. When they saw a house by Ricardo Legorreta, they liked it, but they wanted more from him. They really pushed him to open up all the spaces. He wasn’t just an architect for hire. It was a collaboration.”

Squares and circles define the atrium, from skylight to reflecting pool.  Hilton Hyland

The results speak for themselves. The late architect’s spectacular residence is a bona fide haven for collectors of all stripes, starting with its museum-like interior atrium. In the middle is a reflecting pool—travertine columns surround, and above, there is a large skylight, layering circles within squares and squares within circles. The owner, Joel Silver, a Hollywood producer behind big name action movie franchises like The Matrix, Die Hard and Lethal Weapon hung many of his collected artworks here.

The dining room. The ceiling ascends to a point, like a pyramid.  Hilton Hyland

It’s not a home that’s confined by just one architectural style, either, though the façade is signature Legorreta: cubic and cast in a warm, reddish hue. The living room has a ziggurat ceiling, a design with roots in ancient civilizations. The ceilings in many other rooms are adorned with 100-year-old wooden beams—beams taken from Connecticut churches and barns.

The one common thread? Circles and squares. The simple shapes can be found in smaller and larger details throughout the home—from the shape of the mansion itself and the circular main atrium to the leather squares and embossed circles on the walls of the home theater. (Which, by the way, seats about 20, and can play both digital movies and 35 mm film.)

Bill Sofield lent his talents to the interiors. His discerning eye for finishes is most evident in the his and hers bathrooms in the master. While the onyx in one is darker and with fiery splashes of red, the other has a more neutral beige tone.

This “his” bathroom in the master suite.  Hilton Hyland

All that being said, $77.5 million is a lofty asking. Should it sell anywhere near that price point, then 470 Layton Way will shatter Brentwood property records, nearly doubling Tom Brady’s $40 million mansion sale to Dr. Dre in 2014.

The “hers” bathroom in the master suite.  Hilton Hyland

Feder’s confident, though. So long as the buyer is discerning. “They have to understand architecture,” she says. “This isn’t just the normal Spanish house or colonial house. This is a piece of art.”

Check out more photos of 470 Layton Way, below:

The family room, which has 60-foot ceilings. Doors open hydraulically to let the outside in.  Hilton Hyland