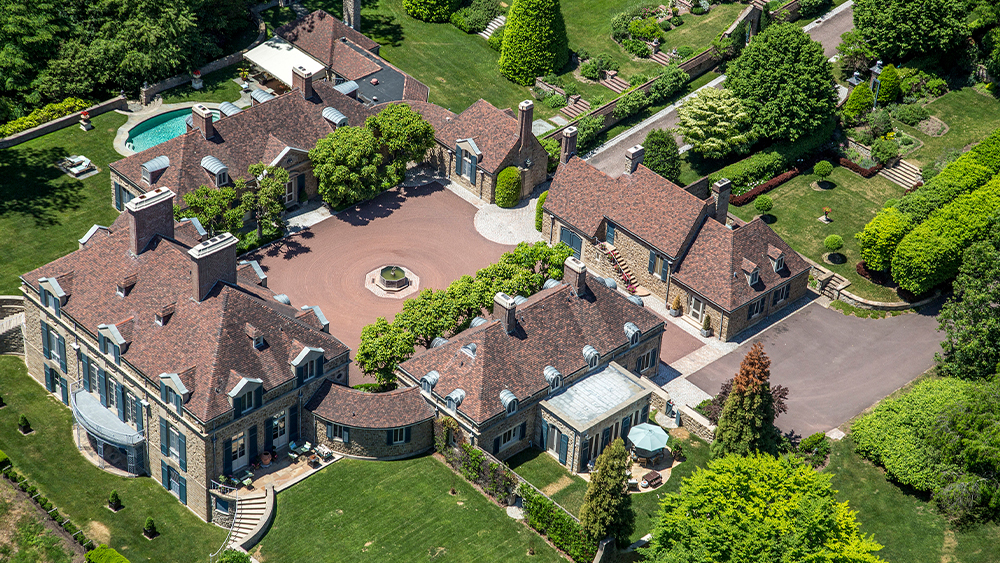 A French Normandy-style estate on the outskirts of Philadelphia, once owned by the heirs to the Campbell Soup fortune, has just seen its price slashed by over 50 percent, from $23.95 million to $11.75 million.

But don’t go rushing for your check book just yet. There’s a reason for this seemingly astonishing price cut.

Linden Hill, a 20-minute drive from downtown Philadelphia in the tony Gladwyne suburb, was designed in the late 1920s by local architect Edmund Gilchrist for wealthy stockbroker Rodman Ellison Griscom. Built to resemble a picture-perfect French village, it featured a stately 20-room main manor house, a multitude of cottages, outbuildings and barns and vast grounds.

In the 1950s, the estate was sold to Campbell Soup chemist John T. Dorrance, best-known for inventing the concept of condensing soup (which substantially reduced transportation costs). In total, Dorrance and his family lived at Linden Hill for more than half a century.

Fast forward to 1992, and Bob Burch, a leading venture capitalist, entrepreneur and former brother-in-law of fashion designer Tory Burch, bought Linden Hill and, with his wife Susan, raised their five children on the estate.

Part of the estate’s considerable appeal—but also an apparent negative—was the fact that that it came with 67 acres of lush, wooded land. Upkeep proved a constant challenge. So in 2013, Burch decided to sell, placing the estate on the market for $24.5 million.

But even with price cuts—at one point it was briefly offered for $19.5 million—finding a buyer proved elusive. So Burch came up with a series of creative alternatives that included dividing-up the estate in to parcels, or even converting it into a retirement home. All of the plans were reportedly shot down by local residents and area planning committees.

Now, after seven long years of being on and off the market, it seems there’s finally a solution for Linden Hill.

Burch, his attorney and long-serving realtor Lisa Yakulis, of Kurfiss Sotheby’s International Realty, are close to getting approval to divide the 67 acres into five lots. This would include three new homesites, each around 10 acres and priced from $3.6 million.

“We’re really optimistic that this time our proposal will be approved. We even have one of the new lots under contract,” Kurfiss Sotheby’s Yakulis tells Robb Report.

The best part of the proposal is that the original Linden Hill estate is now being offered intact with all its buildings, but this time with roughly 31 (instead of 67) acres of grounds and a price tag of $11.75 million—or 51 per cent less.

“At that price point, we feel Linden Hill becomes extremely well-priced and very appealing. There are much smaller, less architecturally and historically significant estates in the Philadelphia Main Line area that are priced about the same,” adds Yakulis.

The new design of the estate will not in any way effect the original property, she explains. The stately, arrow-straight driveway off cul-de-sac’d Monk Road in Gladwyne will still lead down to the so-called Farm Court, flanked by the lovely, turreted caretaker’s cottage and various outbuildings.

The driveway still continues through a narrow opening, flanked by tall-chimneyed guest houses, into the estate’s main courtyard with the imposing manor house straight ahead.

“The main house is just the most majestic example of French Normandy-inspired design, constructed on a breathtaking scale with magnificent symmetry. And it’s unique in that the owners have preserved, restored and maintained it perfectly,” says Yakulis.

Inside the main house there are eight bedrooms, seven full bathrooms, a living room with hand-carved, wood-paneled walls, a fully modernized kitchen and entry hall with a sweeping main staircase. For ornithophiles, steps away from the house is a whimsical stone aviary with a turreted tile roof and wrought-iron cages on each side, one currently for the Burch family’s egg-providing chickens, the other for peacocks and guinea hens.

“Before Covid-19, potential buyers would look at all the different buildings and question why they would need all these rooms and all this space,” explains Yakulis.

“Now, with families working from home, and older children staying home longer, having all this private space is suddenly very attractive. The one thing Linden Hill offers in abundance is space,” she adds.

Check out more images of the home below: