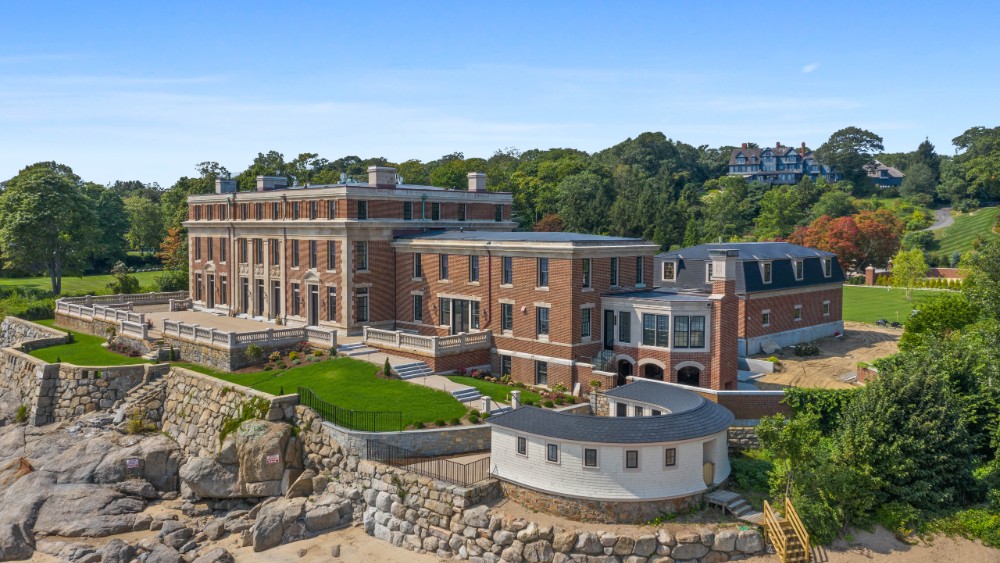 If the fictional Jay Gatsby lived in New England, surely Rock Edge would be his residence of choice. Not only is this waterfront home designed for extravagant parties, but the privacy is unmatched.

Rock Edge, located in the prestigious Prides Crossing neighborhood in Beverly, Massachusetts, isn’t your typical New England-style home. That’s because it was built in 1904 and throughout the years, the owners have paid meticulous attention to preserving its original grandeur. This $20.5 million home is currently the most expensive single-family listing in the state of Massachusetts, with the exception of Cape Cod, and for good reason.

The home was built in 1904.  Douglas Elliman

In the late 1800s and early 1900s, wealthy Bostonian families migrated to the shores of Beverly, Massachusetts—then referred to as the Gold Coast—to build their summer cottages. This is one of the last of those Gilded Age mansions that remains in the area, making it a once-in-a-lifetime opportunity to own something this important. It was originally commissioned by a wealthy Boston woman, Marion Sargent, but the home’s most prominent resident was tennis champion Eleanora R. Sears. She also won trophies for golf, squash, horse racing, field hockey, swimming and distance walking.

Sears was a well-known socialite who hosted many famous people at Rock Edge, including Judy Garland, Cole Porter, Harold S. Vanderbilt and, rumor has it, King Edward VIII of England. She lived here until her death in 1968. The current owner grew up in the home, and felt compelled to preserve and restore the place to its original glory.

“She did throw a lot of parties and knew all the famous and popular people during that time,” listing agent George Sarkis of Douglas Elliman tells Robb Report. “She used it as a summer residence. One time, Cole Porter was at the house and they took the piano outside for him to play at one of her gatherings. She was friends with Alice Roosevelt and got invited to her wedding. But I would say the famous person she spent the most time with was Harold Vanderbilt.”

The property encompasses three acres, and the main residence is set far back from the street.  Upon entering via the large driveway, there is a caretaker’s cottage near the gate. Eventually, you’ll reach the 28,000-square-foot Georgian Revival-style home, with its brick facade, limestone embellishments and slate roof. Although it feels like you’re transported to a bygone era via the restored architectural details and utter elegance, the current owner has thought of every modern amenity for today’s buyer.

“It feels like a royal palace and something out of a movie,” Sarkis says. “The detailed quality of the work and craftsmanship is incredible. This house is so well built and almost impossible to replicate.”

There are 11 bedrooms and 12 bathrooms, as well as a massive 1,500-square-foot gourmet kitchen. Every room feels incredibly elegant, like the grand, double-height foyer, formal dining room and many living spaces. The home’s redesign was led by Linda Zarifi of Zarifi Design, who fully modernized the home with stark-white walls, bleached hardwood chevron floors, custom woodwork, mantelpieces, French doors, large windows and more. Even the kitchen has been totally outfitted in Italian Carrara Marble. Other details include 14 wood-burning fireplaces with marble mantels (all of which have original molding); high-end fixtures and appliances; and gorgeous new chandeliers. The office has custom mahogany walls and millwork that are reminiscent of early 20th-century style.

There are 14 original fireplaces.  Douglas Elliman

“The intricate molding, vast volumes and general intent of layout were all preserved,” Sarkis says. “Moments of historic relevance were also preserved as a nod to the past. The butler’s pantry, with its sculpted 200-year-old nickel sink, was preserved for sake of nostalgia.”

Amenities include a second-floor great room, which can be converted to anything from a media room to a fitness room or live-in staff quarters; sunroom; game room; and music room. There’s also deeded access to the beach with 400-feet of private beach overlooking Beverly Harbor, and a restored cabana with dressing rooms and a bathroom.

Each bedroom feels bright and airy, made to highlight the ocean views.  Douglas Elliman

The home has many spaces for entertaining.  Douglas Elliman

Many high-quality materials were used, like mahogany.  Douglas Elliman