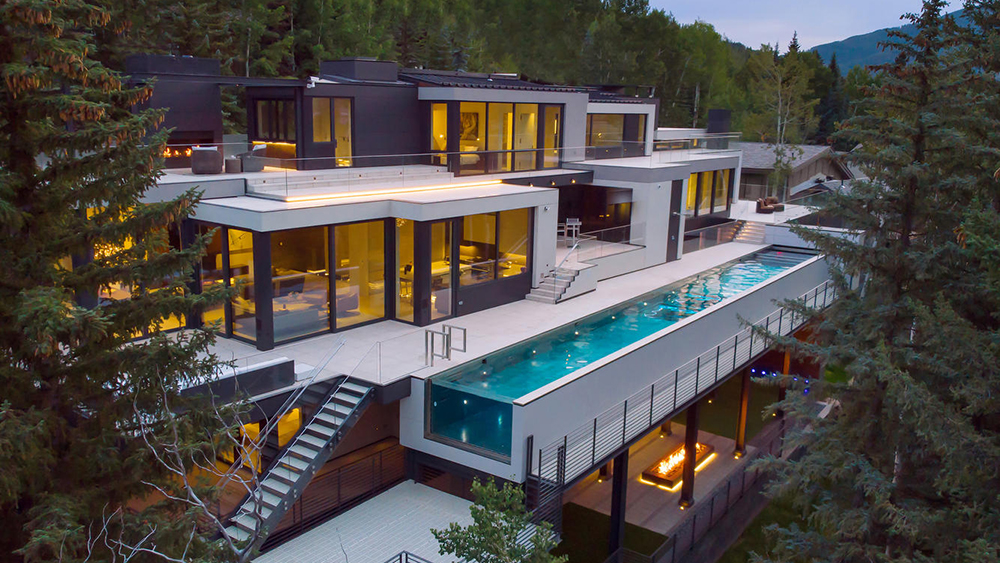 “It has a firepit beneath it so you can sit around the fire and look up and see the sky or stars—or anyone taking a dip,” listing broker Alitza Vagenknechtova with LIV Sotheby’s International Realty tells Robb Report.

Completed in late 2019 after a highly complex four-year build, this glass-rich, 8,800-square-foot contemporary masterpiece was built on two lots just minutes away from the slopes and shops of Vail Village, and was specifically designed to accent the Colorado mountain lifestyle.

Take the wellness level of the four-story home, which features an Italian-style grotto with a hot tub and cold plunge pool positioned beneath a sparkling waterfall. Close by is a cedar-lined sauna and steam room and, for when you need to get those legs moving before a hard day on the slopes, a fitness room and yoga studio.

“The owners wanted a spa to match those of Europe’s finest boutique hotels. It is just a wonderful place to kick off your boots, relax and revive,” adds Vagenknechtova.

The home itself was designed by local architect Hans Berglund, who specializes in sleek and high-tech contemporary structures. The task of building it on a sheer-drop, mountain-side site on Vail’s tony Forest Road went to Shaeffer Hyde Construction. The company also masterminded the intricate, heart-stopping installation of the pool, which was delivered in three sections and had to be craned high over the top of the house—in thick snow—and gently lowered in place.

They were also tasked with installing the almost 7,000-square-feet of triple-pane, sliding steel thermal doors and windows from famed Italian fenestration experts Brombal. “What is remarkable is that the big, sliding windows in pretty much every room go from floor to ceiling, which are mostly 14 to 16 feet high. When they’re open it’s like living outside,” adds Vagenknechtova.

The home also features over 6,500 square-feet of decks and terracing, all of which are heated; when the snow falls, it melts within minutes. Those terraces, especially the ones on the pool level and fourth floor, also offer jaw-dropping views of the surrounding mountains, ski slopes and spectacular 13,500-foot-high, snow-capped Gore Range, part of the Colorado Rockies.

For the best views in the house, however, take the elevator up to the fourth-floor’s glass-sided roof deck, where there’s also an outdoor kitchen and fireplace.

One of the bedrooms.  Photo: Dan Davis/LIV Sotheby's International Realty

The home has five ensuite bedrooms spread over three floors, though it’s the primary suite on the pool level that has the biggest wow factor. Reached by a long, glass-encased steel bridge, it features a 38-foot-by-18-foot bedroom, a 21-foot-long walk-in closet, a private office, a temperature-controlled wine room and 25-foot-long master bath with huge picture windows framing mountains views.

Another major convenience feature of the home is its twin heated garages with space for four cars, plus covered parking for another four. And to wash off the grime, there’s a car rinse area that’s close to the doggy shower. A sloping driveway off Forest Road, leads down to the garages and an entryway into the house with biometric entry access.

One of the bathrooms.  Photo: Dan Davis/LIV Sotheby's International Realty

“For me, what really sets the house apart is the quality of its finishes. The cabinetry is all custom Italian, the fireplaces, walls and floors are polished marble and the woodwork all custom. Most of the controls in the house are through sophisticated Creston and Lutron smart home systems,” explains Vagenknechtova.

While the home was completed in late 2019, according to Zillow it went on the market, with a $45 million asking, just six months later in June 2020. After no one stepped-up, it was taken off and was re-listed last month for the same $45 million.

Vagenknechtova says that during the four years it took to complete the home, the family’s children started to pursue other interests—one daughter rides horses in Florida during the winter, for example—so the Vail house is being used less and less.

But for those interested in living the Vail life, she adds, “(the sale) offers a once-in-a-lifetime opportunity to own a truly unique, two-lot home on Vail Mountain that’s so close to the action. Winter or summer, it is a magical place to be.”

Check out more images of the Vail hideaway below: