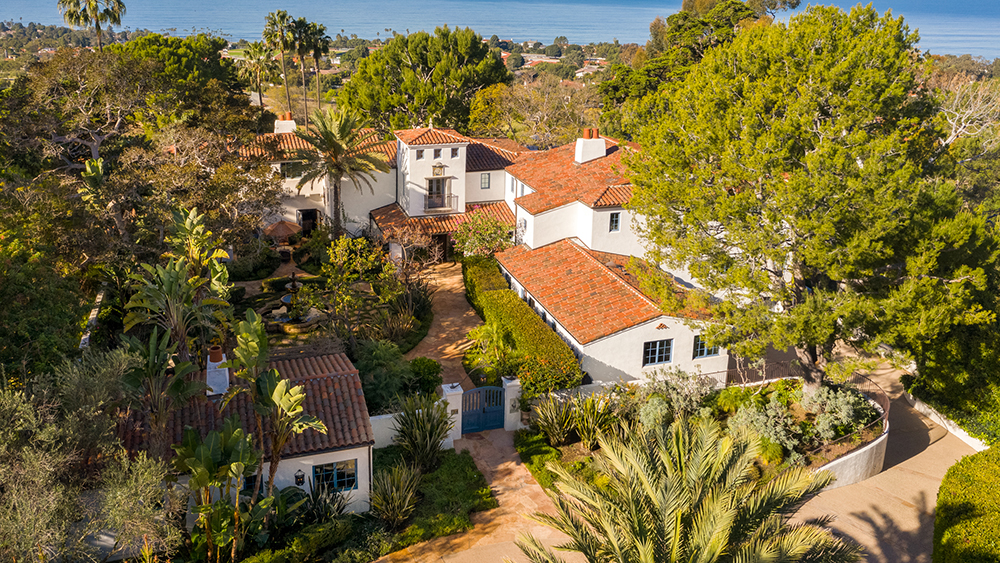 Anyone interested in viewing the historic Roessler House, set on the oceanfront Palos Verdes Estates peninsula south of Los Angeles, should first do a bit of homework on its former owner to get a better feel for the property’s significance.

Back in 1940, Fred Roessler became the first mayor of Palos Verde Estates, holding the job for 25 years until his death in 1965. Known as “The Father of PVE”, he led the two-year struggle to incorporate the community as a city, fought to preserve its rural residential character by limiting commercial development and even fought to preserve its Spanish influence by demanding all roofs be tile.

Today, his bronze bust stands outside City Hall, the pool at the Palos Verdes Swim Club is known as the Roessler Memorial Pool, and one of the best views of the crashing Pacific Ocean can be enjoyed from Roessler Point.

“Even today, it’s a very magical kind of community, with no real commerce, no streetlights or stop signs, and more than 25 per cent of its area dedicated to parkland or open space. Most of that was down to Fred Roessler,” Chris Adlam, listing agent with Vista Sotheby’s International Realty, tells Robb Report.

The home’s many west-facing vantage points are perfect for viewing the sunset.  Photo: Courtesy of Vista Sotheby’s International Realty

Roessler and his wife Edna bought the rambling home at 909 Via Coronel in 1937. It had been built a decade earlier for Donald Lawyer, the sales manager for the Palos Verdes Project—which, at the time, was one of the very first master-planned communities in the US.Lawyer had cherry-picked one of the best plots—a three-acre spread on an ocean-front bluff—and had enlisted acclaimed local architect John Byers to design a 6,500-square-foot Spanish Colonial Revival-style house.

Following Edna Roessler’s death in 1987, the estate was sold for $1.5 million to Roessler’s daughter and her husband. Then, according to records, it was bought in 2000 by current owners, businessman Jose Colloza and his wife Brigitte, for $6.9 million. According to Sotheby’s Adlam, the Collozas undertook a complete, and pricey, three-year makeover of the estate starting in 2003, almost doubling its size to over 13,000 square-feet yet retaining its classic style and proportions.

“Back in the 1920s, homes like this tended to have large living and dining areas, but small bedrooms, small kitchens and little storage. The re-design kept the proportions of the living areas, but expanded the rest,” explains Adlam. Extra space was also added below grade level, with the addition of a five-car garage, tiered movie theater, dry sauna and steam room, gym and two pool house bathrooms.

Today, gates off Via Coronel lead to a large circular motor court with an elegant walkway to the home’s covered entry. Towering trees, tall hedgerows and endless shrubs add to the privacy and seclusion of the estate.

Inside the home, one of the biggest changes made in the makeover was the addition of a huge eat-in kitchen with twin islands, endless counter space and commercial-grade appliances. Close by is a 600-bottle wine room. Up on the second floor, reached by a three-stop elevator, there’s a spacious primary suite with living area, fireplace, expansive walk-in closet and jaw-dropping ocean views. In total, the home features five bedrooms, nine full bathrooms and six half-bathrooms.

Arguably the best feature of this landmark estate is its outdoor space. With no fewer than six outdoor dining areas, a large outdoor kitchen, pool and rolling lawns—all facing west to enjoy the California sunsets—the home makes the most of its coveted hilltop position. The expansive grounds also feature a putting green, a full-size tennis court, traditional Spanish fountain and a 790-square-foot one-bedroom detached guest cottage.

“This is one of those special homes, in a special part of the world, with a unique history. It’s a true, once-in-a-generation opportunity,” adds Adlam.