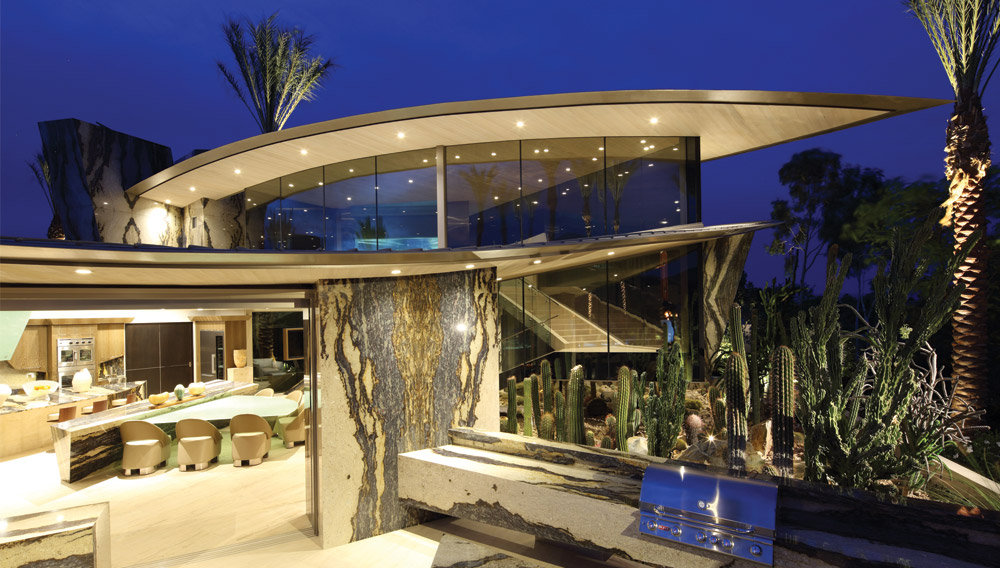 For his ninth house for a longtime client, Guy Dreier designed a singular desert retreat accessorized with his “handkerchief” roofs and other signature flourishes.

This Palm Desert, Calif., vacation home is the culmination of Guy Dreier’s relationship with a very good client: The architect had already created eight other residences throughout the western United States for the individual and his wife. For the ninth house, “he allowed me to do pretty much what I wanted,” Dreier says. “We agreed to do something spectacular, and he turned me loose.” In April, after nearly two years of work, Dreier completed the 7,500-square-foot symphony of steel, granite, and glass. It incorporates his signature grace notes—stone, geometric forms, pools and aquariums—and punctuates certain notes in particular, such as the sweeping roofs that he fondly refers to as “handkerchief thin.”

As Dreier tells it, pitching his ideas was easy—“I made my presentation on an 8½-by-11 sheet of paper, and it hardly ever changed”—but executing them was rather strenuous. The boldly striated granite that dominates the property was fabricated in Italy but first required excavation from a Brazilian quarry; excavated blocks underwent careful inspection and were photographed so that Dreier and his team could make their selections. The granite in the floor of the dining area just off the main living room demanded painstaking work. The polished stone had to be flame-treated, to make the surface safe to walk on, then resealed and color-enhanced to restore its graphic impact.

Harmonizing the stone columns and the homeowners’ art collection, as seen in the game and TV area , also demanded considerable effort. “You can’t hang art over the granite,” Dreier says, noting that the patterns in the stone detract visually from the artworks. The solution was to create backlit niches—carved recesses in the granite—whereupon Dreier installed upholstered panels as neutral backdrops for the various pieces. Additional measures taken for aesthetic purposes included cutting a wedge in the wall above the fireplace, near a granite column, to maximize views of the stone and the outdoors.

The hallway leading to the master bedroom brings together two Dreier hallmarks: aquariums and Fletcher Benton artworks. Small mounted sculptures by Benton line the wall on one side, while something of an illusion lies just opposite. What appears to be a single glass tank uniting both levels of the home is, in fact, two separate aquariums.

No area of the home, however small, is an afterthought. The powder room has the same strongly patterned granite that enlivens the rest of the house, and the glass artist Danny Perkins created the lavatory’s slim, red sculpture, as well as the trio of warm-colored works perched near a couch in the main living area. Dreier’s well-designed lighting makes Perkins’s art seem to glow from within. “We had to hit it exactly in the core from above to get it to pop,” says the architect.

The kitchen is as important to the homeowners as its generous size implies. It includes a bar, a plating area, and enough room for the wife to lead cooking classes. Each of the areas here and throughout the property received careful consideration. “There’s no media room in the house. It’s about cooking and entertaining,” says Dreier. “This is basically a one-bedroom house, and they use 100 percent of [it]. There is no wasted space.”

A double vanity in the master bedroom is Dreier’s answer to a small problem with the last desert home he built for the client. “He wants to be able to stand at the vanity and shave and look at the snowcapped [San Jacinto and Santa Rosa] mountains. It makes him very happy. The last house didn’t have the snowcapped mountains, and I heard about it,” Dreier says, laughing. “He has them all the time now.”

The master suite is in tune with the rest of the home, featuring the same cool neutrals, patterned stone, and showcase spots for various artworks. Highlights unique to the space include the petite Benton sculptures that line the hallway and crown the headboard and a wall hanging featuring hand-tied pieces of copper wire, by the Santa Barbara–based artist Susan Venable.

The exteriors are just as artful as the interiors, with a pair of Benton’s Cor-Ten steel sculptures acting as visual anchors at the extreme ends of the home. Each sits on a platform in a pool of water. “I thought something as heavy and industrial as they are, floating in water, would be a beautiful juxtaposition,” says Dreier. Elements of the landscaping also serve as art objects. Date palms do not merely surround the property; they are threaded through it, reaching skyward from between custom-finished metal baffle walls and even standing in the pool.

Though Dreier designed the entire property in about eight days (the floor plan in one day, the rest in about a week’s time), it took 20 months to construct. “You have to be excited for the challenge or you shouldn’t be on this job,” says Dreier, speaking of the highly customized nature of the house and the difficulties of realizing it. “You’re not going to find this in a catalog.”