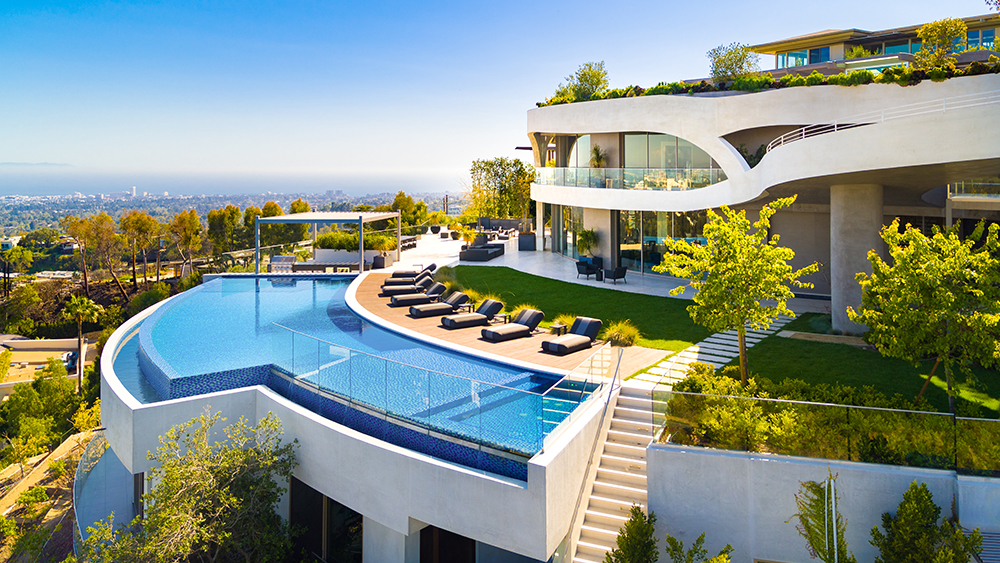 Unlike most homes, you enter 12255 Sky Lane through the roof. The address, which is listed for $29.95 million, is accessible via an Italian marble driveway that winds down into a three-car garage. Alternatively, you can park on the roof itself, which doubles as a 20-car auto gallery. It’s the perfect way to show off your prized wheels. While many residences keep these gallery spaces tucked away in the basement, Sky Lane’s is front and center.

It’s a great vantage point, too, as the 16,700-square-foot home enjoys spectacular, 180-degree views of the Pacific Ocean from its hilltop perch. Located in Brentwood, one of LA’s most affluent enclaves, it’s even visible from the Getty Museum. Designer Sanam de Loren of de Loren & Associates took the museum’s distinct façade as inspiration for Sky Lane’s similarly curvy exterior.

Inside, the seven-bed, 11-bath home is just as impressive. The ground floor seamlessly blends indoor and outdoor living, with a living room and kitchen that open up to a front yard with a 75-foot-long infinity pool. Every bedroom has a window that takes advantage of the property’s vantage point. Plus, getting around the three levels isn’t too much of a drag, as there are two elevators that can take you anywhere you need to go.

Want to see it for yourself? In a recent episode of “Robb Report Home Tours,” listing agent Marcy Roth of Douglas Elliman took us inside this extraordinary listing.

Other amenities include a 13-seat theater, 650-bottle wine cellar, gym and sauna. There’s another, more invisible amenity that’s worth noting too: Sky Lane’s Darwin system, a state-of-the-art device that can adjust the home’s air purification and water filtration to the owner’s liking.

De Loren added standout architectural moments inside Sky Lane, too, to compliment its jaw-dropping façade. One point of inspiration was Fibonacci’s geometric spiral, which de Loren captured in the home’s staircase. It’s the same concept she used for the corkscrew driveway, as well as the layout of the front yard where, beneath the infinity pool, there is a 10,000-square-foot stepped garden with a 300-tree fruit orchard.

The car gallery space and driveway on the upper level, which has a spectacular view of the city.  Amazon

Another twisty moment inside Sky Lane is a pair of custom walnut bars by Japanese woodworker Toshi Kawabata, which occupy the kitchen and lower level entertainment area. Also by Kawabata is a curved, sculptural wood wall in the living room, which breaks up the open space—and morphs into seating at its base.

In other words, there’s something here for everyone—whether you’re a wellness nut, a car collector or an architecture nerd. Want to scope it even further? Check out more images, below:

The Toshi Kawabata bar in the kitchen.  Douglas Elliman

One of the bedrooms.  Amazon

A closer look at the green wall and the Toshi Kawabata divider in the living room.  Douglas Elliman