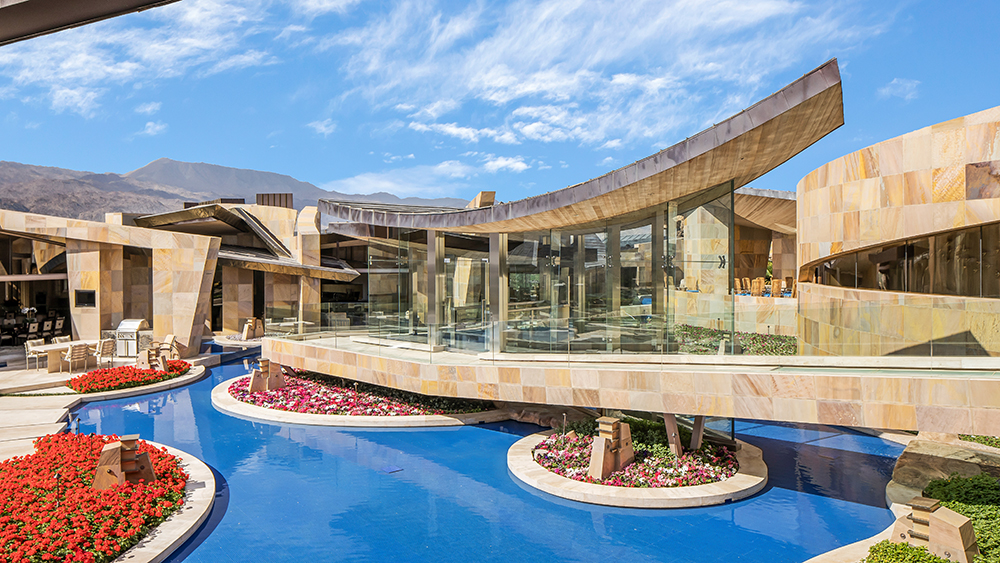 If you’ve ever wanted to live somewhere that’s part home, part sculpture, well, the time is now. A mansion in California’s Palm Springs area has just hit the market for $49.5 million, and there’s barely a right angle in the residence’s swoopy facade. There’s also an aquarium tunnel with room for a few sharks to roam (so long as they’re not enormous great whites).

The home was built for Duane Hagadone, a newspaper publisher and real-estate developer—he’s perhaps best known for founding the Coeur d’Alene Resort in Idaho. He commissioned Guy Dreier, an architect whose résumé included many similarly striking residences, to create the unconventional home. Dreier’s plan for the Hagadone Residence consists of a curved copper roof and an exterior clad in panther slate from India. The idea was to create a home that resembled the surrounding desert and mountains.

The aquarium tunnel, which leads to the dining room  Anthony Barcelo

The 32,000-square-foot main house is situated on eight acres of land; other structures on the property include a guest house, a garage and an office that looks as if it’s been carved out of the mountainside. Visitors enter the mansion via a glass elevator and are greeted by a titanium fireplace in the living room, as well as a striking Dale Chihuly sculpture that’s included in the sale. It’s a seven-bed, 12-bath parcel altogether.

One of the kitchens  Anthony Barcelo

Of course, the home’s most notable aspect is easily its many water features. The first is a large indoor aquarium that you can walk through like a tunnel—it can house exotic fish as well as sharks. Outside the home has not one but three pools that interlock with one another. There’s also a koi pond near the entrance, plus waterfalls adjacent to the garage and office.

One of the living areas  Anthony Barcelo

It also has an advantageous location (although a bit remote). The home is situated on a rare parcel of land within Bighorn Golf Club, where members can enjoy access to the scenic 18-hole courses, as well as the clubhouse’s spa and restaurants.

Years ago, in 2009, the residence was even named Robb Report‘s Ultimate Home. So it certainly has our seal of approval.

Check out more photos of the digs below:

One of the home’s many fireplaces  Anthony Barcelo

The office, which is carved out of the surrounding mountains  Anthony Barcelo

There are koi ponds leading up to the entrance of the main home.  Anthony Barcelo