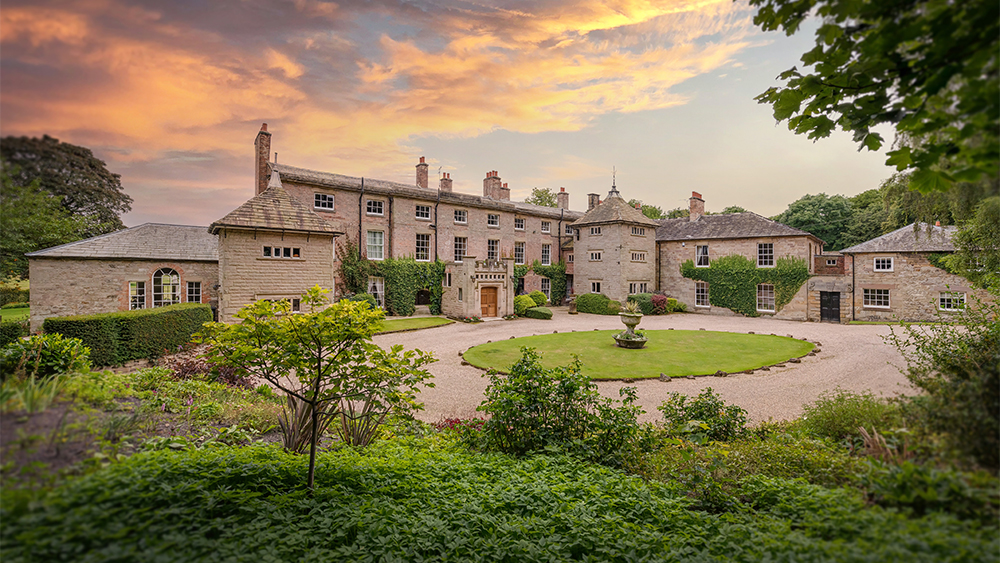 Mild or bitter, or maybe an IPA. Or perhaps a dram of fine single malt. The choice is yours. Just help yourself from behind the bar at Hopton Hall’s cozy pub with its roaring fireplace, dartboard and every board-game under the sun.

“The beauty of having your very own pub is that you don’t have far to stumble into bed,” Clare Bingham, an Associate Director at leading UK realtors Savills tells Robb Report.

Hopton Halls’ wood-paneled pub (no, it’s not open to the public) is just one of the multitude of amenities that comes with this magnificent Grade II listed country estate set near the quaint village of Wirksworth on the edge of Northern England’s rolling Peak District. The property recently hit the market for £7 million, or around $9.2 million.

Your own private pub  Courtesy Savills

Other perks include 17,400 square feet of interior space and 13 bedrooms, including a two-story master suite with his-and-hers bathrooms (on different floors), twin dressing rooms and a private gym.

Then there are the six stand-alone cottages set around a courtyard, currently being used for revenue-generating vacation rentals. The cottages, with such colorful names as the Dovecote, Butler’s Quarters, the Card House and Gardener’s Cottage, can accommodate a total of 40 guests. The biggest cottage, the Granary, has no fewer than seven bedrooms with room for a family of 14.

“During the pandemic, the cottages have proved hugely popular and in great demand. They’ve provided regular and quite substantial income,” says Savill’s Bingham.

Hopton Hall itself dates back to 1414 and the colorful Gell dynasty that owned the estate for more than 600 years. At one time the grounds sprawled over 3,700 acres. During that period, the family hosted guests that included Oliver Cromwell, Mary Queen of Scotts and Queen Caroline. In 2010, the property was bought by current owners Sir Bill Thomas, a former senior vice-president of Hewlett-Packard Europe, and his wife Lady Julie.

Since then, according to Bingham, the couple has invested a small fortune on upgrading the cottages, modernizing the main house, reinforcing the 45 chimney stacks and installing a new renewable-energy heating system that uses wood pellets sourced from sawdust.

“Today it’s all in immaculate condition and decorated in a way that makes it feel homey and intimate. So many of England’s country homes feel cold and museum-like. Not this. It really feels like a family home.” Albeit one to which, not so long ago, Princess Anne popped-in for a spot of tea.

The main house and some of the cottages  Courtesy Savills

A long, serpentine driveway meanders from the gated entrance to the home’s impressive circular gravel motor court. Imposing wooden front doors lead into an elegantly paneled reception hallway with a sturdy oak staircase leading up to a galleried landing. The shabby-chic drawing room, with floor-to-ceiling windows and doors opening out on to a large patio, features an early 19th century plasterwork ceiling and huge fireplace. Close by is the home’s formal dining room with its table for 18, a separate snooker room and an oversized live-in kitchen complete with fireplace, dining table and furnace-like electric Aga cooking range.

Since acquiring Hopton Hall, the Thomases have opened up the extensive gardens to the public for their annual Snowdrop Walk during February and March, when the grounds’ snowdrop flowers are in full bloom. They’re also open in late June, when more than 2,000 roses are on display in the home’s famous Rose Garden.

One fascinating feature of the garden is its wonderfully-named “crinkle-crankle” wall that dates back to the 1700s. Getting its name from its wavy, serpentine shape, the design dates back to Ancient Egypt.

As for those 50 acres of grounds. they’re filled with endless walking paths that lead down to the expansive Carsington Water reservoir and its multitude of watersports activities.

Why the decision to sell Hopton Hall? According to Savill’s Bingham, the Thomases are looking to downsize since their three children have grown and left the family home.

“There are so many opportunities with this property. It could be turned back into an impressive, and very spacious, family residence. Either that, or the vacation-rental business could be expanded with more cottages. Or the house could be turned into a corporate retreat or events venue,” she explains.

As for opening up Hopton Hall’s pub to the public? Probably not a good idea as the local village has no fewer than four pubs within easy walking distance.