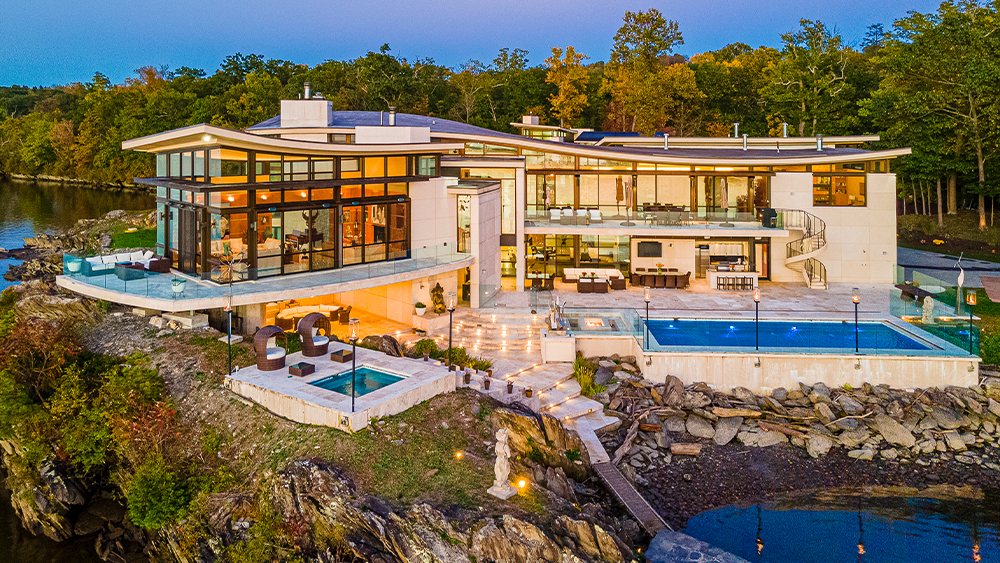 Few second-home destinations anywhere in the US experienced Covid-era property booms quite like the Hudson Valley just north of New York City. The area, around 100 miles north of Manhattan, saw prices rise upwards of 20 percent—while notable towns like Kingston became, for a time, the “hottest” real estate markets in the entire nation. The surge was fueled by New York families escaping the city during the initial Covid lockdown and eager for sprawling homes without the Hamptons prices. And the Hudson Valley delivered on both—including a welcome crop of new-build properties to accent the endless historic homes that many buyers have so long coveted in the region.

One new(er)-build in particular has now come to the market—a massive, uniquely positioned estate perched on a private peninsula and surrounded by water.  The property, 46 Ledgerock Lane, is located in Hyde Park, which fans of early 20th century history will recognize as the family seat of Franklin Delano Roosevelt. “Hyde Park was the first-choice location for most of the prominent New York City families who wanted a home in the Hudson Valley,” explains Jason Karadus, owner of Corcoran County Living, which is representing the estate. These properties include the fabled Vanderbilt Mansion, a Beaux-Arts masterpieces from 1899 along with Springwood, FDR’s historic birthplace, as well as with Val Kill, the private “cottage” where Eleanor Roosevelt spent much of her private life.

Although inspired by the grandeur of these famed estates, 46 Ledgerock Lane—which is about seven miles south of Rhinebeck—is something else entirely. The 10-acre property, Karadus explains, was originally created back in 2009 by combining a trio of existing buildings which were then joined together by “underground tunnels that allowed the builder to recreate a (far larger) residence atop the same footprint.” The resulting three-winged property is perched, seemingly precariously—onto a bijoux peninsula jutting directly into the Hudson River.

“This is the only estate on the market right now built into the banks of the Hudson,” Karadus says. This Hudson River location is not just rare, but impossible to replicate—since new laws requires set-backs of at least 200 feet from the shoreline. “Nothing like Ledgerock can ever be built again,” adds Karadus, who notes the property offers prime Hyde Park and Rhinebeck views.

Like many of the historic homes that helped inspire it, Ledgerock is mostly crafted from creamy limestone, paired with towering walls of glass that provide river views from nearly every angle. The home is large; nearly 15,000 square feet with five bedrooms and seven and one-half bathrooms. There are also over 5,000 square feet of travertine-clad pool and deck area along with a three-bedroom guest cottage just behind the main home designed “like a smaller version of Ledgerock” with nearly the exact same architectural style. Both the main and guest home are capped by subtly sloped roofs that flow like wings atop the buildings.

With the property itself, those glass walls wrap around the home and reach 18 to 20 feet in height, while interiors include floors, walls and panels crafted from European and Asian stones and woods. There’s a theater room, indoor pool and gym—while outside is a show-stopping  pool set directly on the Hudson, along with a jacuzzi and endless alfresco entertaining space. There is a private dock for folks arriving via boat, while visitors who prefer a more dramatic—and expedient—arrival can helicopter in thanks to the helipad at the nearby Poughkeepsie Yacht Club. “The property is much larger than many of the newer estates in the area, but not unusual for the historic mansion that preceded it,” Karadus says.

With its peerless location and 21st century aesthetic, Ledgerock has an almost cinematic quality to it; it feels like a riverfront hideout for tasteful superhero busy saving the world. In the real world, Karadus sees Ledgerock likely appealing to a type of buyer who longs for the grandeur of traditional Hudson Valley estate living—but with the technology and convenience of contemporary architecture and design. “We are now seeing more buyers from New York, the West coast and even the Hamptons, who are looking to the Hudson Valley for luxury estates on large parcels of land,” Karadus says. With Ledrock, that search might soon come to an end.

A bedroom, with the river just beyond.  Walker Esner