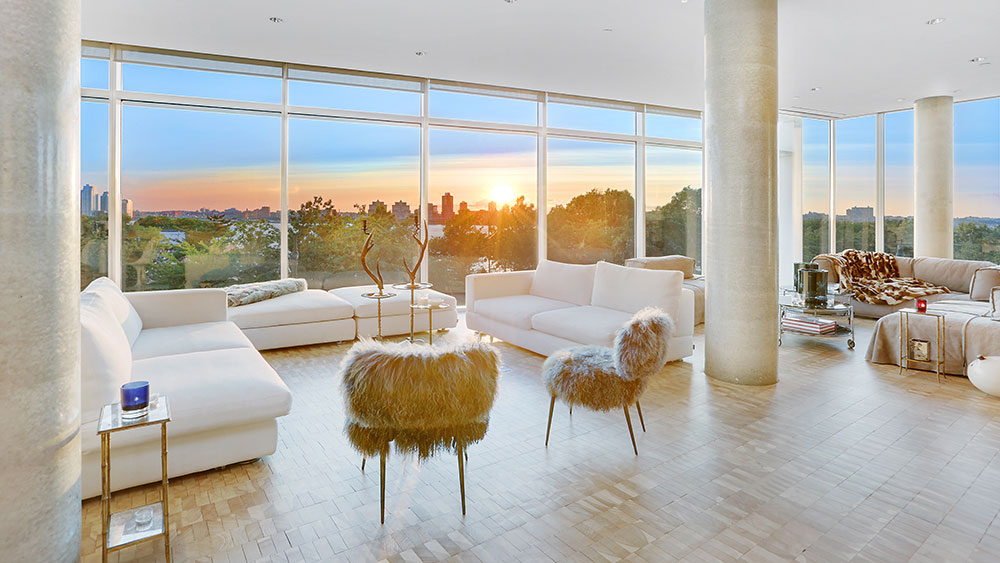 Many still reminisce about the glitz and glamour that surrounded Studio 54 in its heyday. Now it’s a Broadway theater, and while it’s not for sale, the co-founder of the famed nightclub, Ian Schrager, has just listed his personal New York City residence for $10 million. Unfortunately, buckets of glitter and over-the-top parties are not included.

Still, it’s a cozy pad in its own right. The condo is located on the third floor of 176 Perry Street, a Greenwich Village tower that was designed by Pritzker Prize-winning architect Richard Meier—at the time it was built, it was his first construction in the city. Instead of a series of cramped units stacked on top of each other, here, each home gets a full floor all to itself—which explains why celebrities like Hugh Jackman and Nicole Kidman have chosen to live here over the years.

The unit has sweeping views of the Hudson River.  Photo: Courtesy of Douglas Elliman

Schrager may not have a lengthy filmography, but his entrepreneurial streak extended beyond Studio 54. He went on to create Palladium, another notable NYC nightclub and Morgans Hotel on Madison Avenue, for which he’s credited with creating the paradigm of the “boutique hotel.” He now oversees the Public and Edition hotel brands.

The home he’s leaving behind balances seclusion and spectacular views. There’s a private elevator landing, so you can zip straight up to your new unit, and a wall of floor-to-ceiling windows in the great room that looks out on the Hudson River. Altogether it’s a three-bed, five-bath, 3,700-square-foot residence, with a fourth room that can serve as either an additional bedroom or an office.

One of the bedrooms.  Photo: Courtesy of Douglas Elliman

Future residents can enjoy all of the building’s amenities as well, including access to the gym, concierge services and room service from Jean-Georges’ Perry St restaurant, which is downstairs. Plus, there are only 10 units in the building altogether—a level of exclusivity that’s a sort of amenity in and of itself.

Want to get a closer look at the sunny new listing? Check out more photos below:

One of the bathrooms.  Photo: Courtesy of Douglas Elliman

Another view of the great room.  Photo: Courtesy of Douglas Elliman