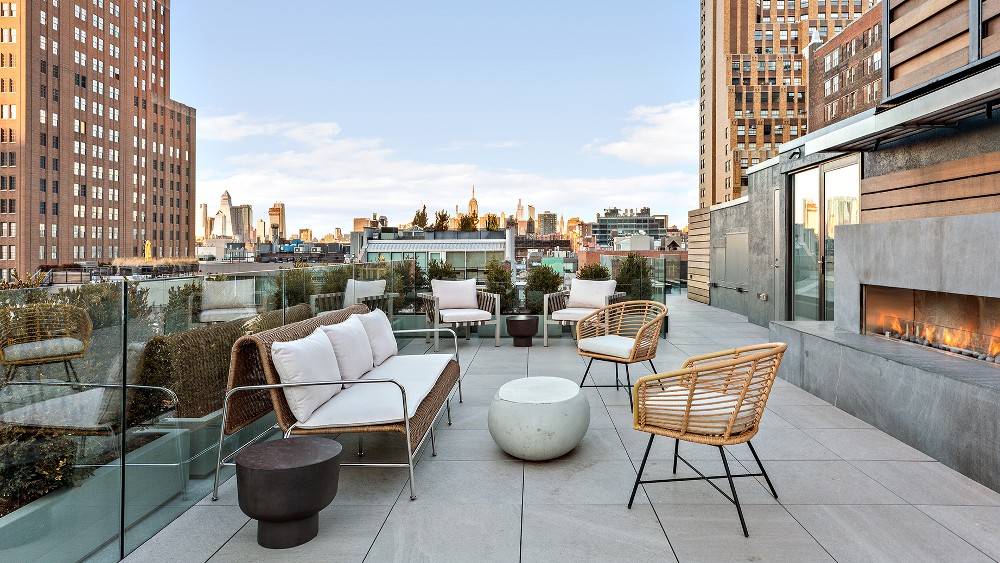 This landmark building at 53 White Street was first constructed in 1857 with the classic cast iron architecture that is often seen in New York’s Tribeca and SoHo neighborhoods. Over the years, however, the building lost its 19th-century charm and its cast iron facade was covered with fire escapes, fire-retardant cement and concrete. So when developer David Friedman purchased the property in 2016 in an effort to transform it into luxury residences, he began peeling away the layers and restoring it to its former glory.

The penthouse is listed for $20 million.  Compass

Friedman was able to restore the marble on the facade, replace all the windows and uncover the ornate cast iron columns. Whether in the lobby, amenity spaces or certain units, residents are able to peek at the past via these 19th-century design elements. Inside, however, the 13-story building’s seven immaculate units have been modernized for today’s luxury buyer,

The penthouse, listed for $20 million, is the crown jewel, and is surrounded by private outdoor spaces and wrapped in floor-to-ceiling windows, allowing in plenty of natural light. It spans two floors, each with a private elevator entry. The four bedrooms are on the lower levels of the penthouse, as is a home office that can be converted to a fifth bedroom.

The duplex penthouse has four bedrooms, with the option to convert the office into a fifth.  Compass

The upper level features the open kitchen, living room, dining room and media rooms. It also connects to the incredible rooftop terrace, which is able to comfortably host dozens of guests for what are sure to be epic parties. It has an outdoor fireplace, full outdoor kitchen for summer BBQs, an additional bathroom and shower and dining and lounging areas; there’s also a beam to support a hot tub. Lush greenery and tall hedges help to protect the owner’s privacy, while also framing incredible views over downtown Manhattan.

The terrace has an outdoor kitchen, fireplace, bathroom and more.

High-end finishes are second-to-none and include Siberian rift-cut, quarter-sawn white oak floors throughout, as well as Statuario marble in the kitchen and marble, limestone and slate tiling in the bathrooms. Italian fixtures from brands like Mirabelle and Fantini are also found in all the bathrooms. For tech-savvy buyers, the residence comes with a Savant automation system and is fully wired for audio, lighting and climate control via the system. There is also a water filtration system, multi-zone central air conditioning and an LED lighting system to suit any ambience.

If that’s not enough, the building has a fitness center and spa, complete with an aromatherapy and chromatherapy steam room, infrared sauna and massage room.

Check out more images of the property below:

There are multiple living areas throughout the residence.  Compass

It’s hard to believe the building was first constructed in 1857, given its modern aesthetic.  Compass

The bathrooms are made using the highest quality materials.  Compass

Views from the private rooftop.  Compass