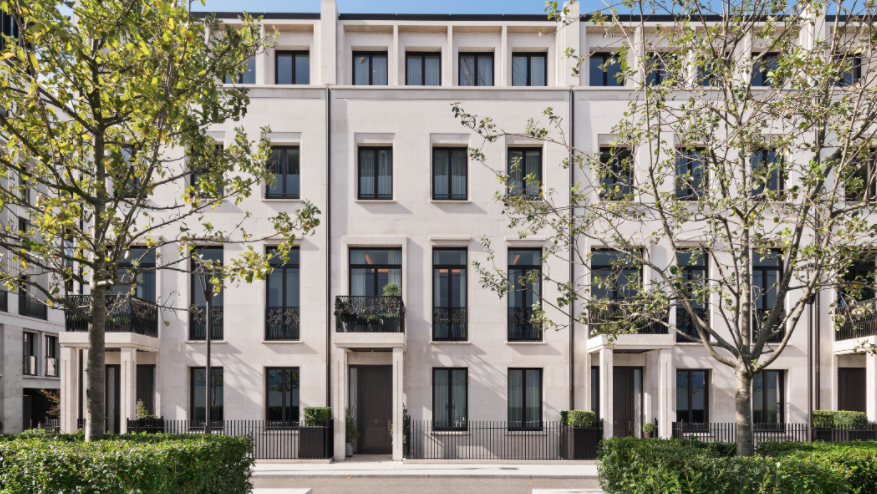 Chelsea Barracks, the central London development that’s famously dear to the heart of Prince Charles, has unveiled a spanking new townhouse, yours for the rather royal sum of $49 million.

The five-bedroom, six-floor row home is not the most expensive in the controversial 13-acre Belgravia luxury community (a penthouse listed for $55 million in February 2020 has since sold for an undisclosed sum), but it is the biggest and the most true to the surrounding Georgian vernacular. The new townhouse at Three Mulberry Square is designed as a contemporary take on the classic Belgravia row house or “terrace,” discreetly lavish, with nearly 10,000 square feet of opulent living space behind a façade of sparkling white Portland stone.

Fitting in with one’s “environs” matters in Belgravia, which is a British byword for old money discretion. The conservative neighborhood, long characterized by its most famous resident, Margaret Thatcher, maintained a resolutely dowdy and old-fashioned stiff upper lip long after new Russian and Middle Eastern money began pouring into the ritzier nearby districts of Knightsbridge, Chelsea and Mayfair. The cracks in that establishment reputation began to appear in 2003, when Roman Abramovich, the oligarch owner of Chelsea Football Club, moved into Belgravia’s Eaton Square, shortly to be followed by so many of his compatriots that locals began to call it Red Square.

Then, in 2007, at the pre-crash peak of the London real estate bubble, Qatar’s sovereign wealth fund paid nearly $1.3 billion, the most expensive land deal in Britain at the time, for a disused army base in the area’s shabbiest corner, next to Victoria coach station. The initial designs for the development caused polite dismay among the surrounding white stucco Regency terrace, where they were condemned as high-rise and low taste. Prince Charles, a long-standing opponent of modernist architecture, personally appealed to the Qatari prime minister in a famous letter, condemning the “destruction” of central London by “Brutalist developments”. The plans were promptly altered, amid much litigation, to today’s Neo-Geo riff on the 1820s.

The new townhouse is certainly classic in the sense that it’s a row house, so it’s very close to the neighbors, but then so is every other home in London. What the rest of London does not have is a roof deck, a large private garden and gorgeous pool, a steam room, a private gym, screening room, wine cellar and two staff bedrooms. Six-story townhouses may be common in the English capital, but almost none of them has multiple elevators—this one does, so the owners will need that gym.

According to the developers, buyers at Chelsea Barracks—two-bedroom apartments start at $6.7 million—are so far a mix of Brits, Americans and assorted other foreign nationals. Once complete, the development will comprise a mix of apartments and townhouses arranged around traditional English gardens, as well as restaurants, shops, an enormous gym and spa and a Victorian military chapel that will be reborn as a public art gallery.

One of the home’s five bedrooms.  Photo: Qatari Diar