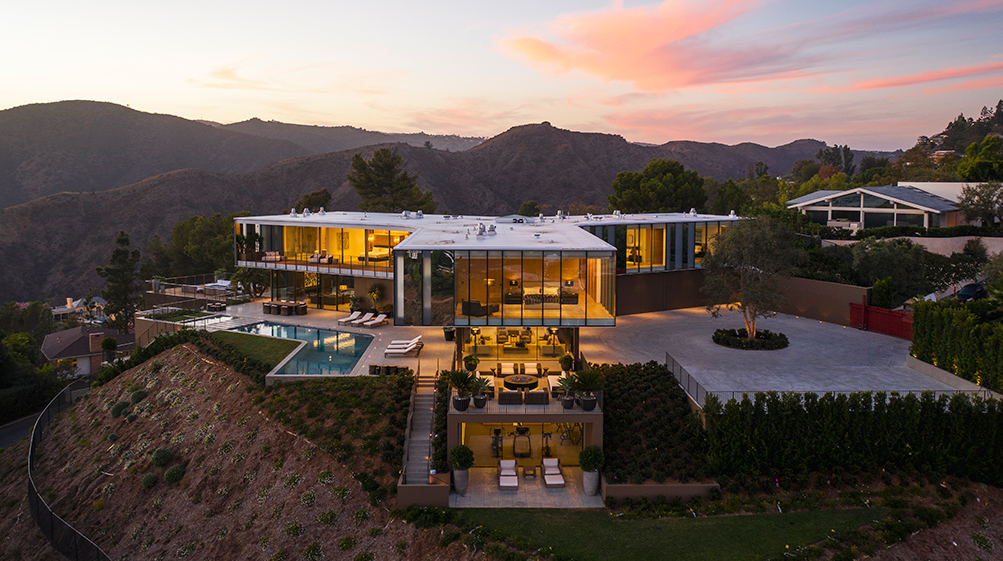 Bel Air is home to many an impressive mega-mansion, but few are as architecturally significant as 11490 Orum Drive. Better known as the Orum House, this 18,800-square-foot new construction was designed by architect Zoltan Pali of SPF:architects with three distinct wings, each jutting out in a different direction from a central node. But although it’s an undeniably standout residence, it’s anything but grandiose. Inside, a color palette of grays, browns and taupes make it feel immediately familiar and evoke a sense of calm, almost like a retreat—one that just so happens to be on top of the world.

The $56 million stunner sits atop a lofty knoll in the heart of Bel Air, where it enjoys jaw-dropping views of the city below. You can even catch a glimpse of the ocean on a clear day. And, like many homes in the area, the Orum House seamlessly blends indoor and outdoor living, with floor-to-ceiling glass windows in practically every room. On the ground floor, they open up to merge the outdoor pool, lounge areas and fire pit with the interiors.

Want to walk the place yourself? You’re in luck—Mauricio Umansky, founder and CEO of mega luxury brokerage The Agency recently gave Robb Report the full tour on Instagram.

Get a tour of 11490 Orum Drive with CEO and founder of @TheAgencyRE, @mumansky18.

“The developer, Dang Bodiratnangkura, had this incredible vision—she wanted to build one of the most architecturally significant houses that she’s ever done,” Umansky tells Robb Report in the segment. “She never value-engineered anything, so the house is exactly what she wanted. No expense was spared here.”

The interior finishes were all handpicked by the developer.  The Agency

And it shows. Down the staircase—which is a spectacular, angular structure that zigzags up the home—is the home’s amenity suite. This includes a 1,000-bottle wine cellar, a gym with a view, a spa and sauna, a movie theater and an expansive chef’s kitchen. (There is another, smaller kitchen in one of the wings on the ground floor.) Also accessible via this floor is the Cube, a four-bed, four-bath guest house that’s part of the Orum House parcel.

The home seamlessly blends indoor and outdoor living.  The Agency

The second floor houses the bedrooms, of which there are nine in total. The master suite gets a whole wing, or rather, propeller blade, to itself. The bedroom has spectacular, 270-degree views of the city, as well as deck access. It’s not the only spacious bedroom in the house, though, as there’s another mini-master on the second floor that’s similarly set up.

And if you’re smitten with the place, you can buy it as is—furniture and all. See more of it, below.

The glass and steel staircase.  The Agency

One of the home’s 15 bathrooms.  The Agency

A portion of the 1,000-bottle wine cellar.  The Agency