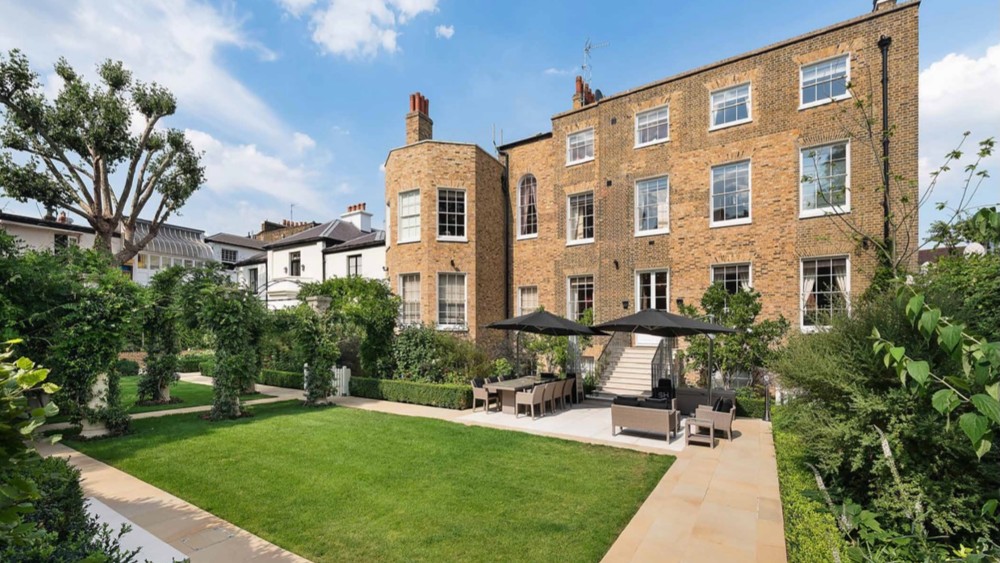 There are few city properties that can match the history, grandeur and amenities of Sloane House, located on Old Church Street in London’s Royal Borough of Kensington and Chelsea. The Grade II-listed residence is a former 18th-century Georgian mansion purchased by Formula One heiress, billionaire and British socialite Petra Ecclestone in 2010.

Today, Ecclestone, her fiancé, Sam Palmer, and her four children split their time between Los Angeles and London, where they stay at Sloane House. The off-market home is valued at $230 million, and should the right buyer come along, Ecclestone is willing to part with it. The price tag feels warranted, considering the five years of work that went into perfecting this one-of-a-kind estate.

Sloane House is a former 18th-century Georgian mansion that has been heavily restored.  Patrick Williamson

Sloane House spans a staggering 25,000 square feet over five-and-a-half levels and has eight bedrooms and 15 bathrooms. Two of these levels are subterranean, and due to today’s current permit restrictions, building this deep underground is no longer allowed in London, making this home totally unique.

“It’s such an exceptional home that took many years for Petra to build,” says Palmer, a real estate agent with Partridge Estates Group of Hilton & Hyland and Ecclestone’s fiancé. “It can’t be done again in London. The amenities in this house also rival any of the best hotels in the world. The home was quite ahead of its time in London when it was first built. We’re seeing these types of amenities more now, but these were not the typical amenities when Petra first built it.”

There are eight bedrooms and 15 bathrooms.  Patrick Williamson

These amenities alone are sure to draw a discerning buyer. Located primarily on the two subterranean levels, the hotel-like perks include an indoor swimming pool, a spa, a massage room and a stunning hammam that rivals the best out there. There’s also a squash court, a kid’s playroom and a movie theater. The estate even houses Europe’s second-largest residential aquarium, found next to the dining table in the kitchen.

There are several custom crystal chandeliers throughout the house.  Patrick Williamson

The property underwent a substantial redevelopment after Ecclestone purchased the property. She retained the historic exterior, facade and structure of the home, but completely reworked the interiors with renowned luxury design firm Candy & Candy. The modernized version is exceptionally chic, with marble flooring, custom crystal light fixtures, plenty of modern art and sumptuous textures like velvet furniture.

“Petra’s got quite masculine taste,” her fiancé says. “She worked mostly with Candy & Candy and the bedroom was done by Gavin Brodin, who also worked with her on the Manor. It was really down to her style and taste, but the home does a great job of bringing the new world into the old world. There’s a very good merger of styles there. She had such a vision for the home. “

In addition to the immaculate design and amenities, you will also be hard-pressed to find a home of this size in the center of London. Even the parking alone has room for 17 cars just beyond the private, gated entry. Palmer says another special feature, having lived in the home, is the large staffing quarters that extends through the entire middle of the house and is accessible from every staircase, ideal for the buyer looking to move in with their staff.

“There is no property that has grounds like this in the city center, and that’s what makes it so special,” says real estate agent Mick Partridge of Partridge Estates Group with Hilton & Hyland, who is representing Sloane House. “The garden, lawn and yard spaces are also second-to-none. Because of the subterranean level amenities, there is still plenty of yard space to enjoy.”

This isn’t the first large-scale property Ecclestone is known for. She once owned and lived in Los Angeles’ famed Spelling Manor from 2017 until she sold it for $120 million in 2019.

There are two subterranean levels of amenities.  Patrick Williamson

The home is located beyond a private, gated entrance.  Patrick Williamson