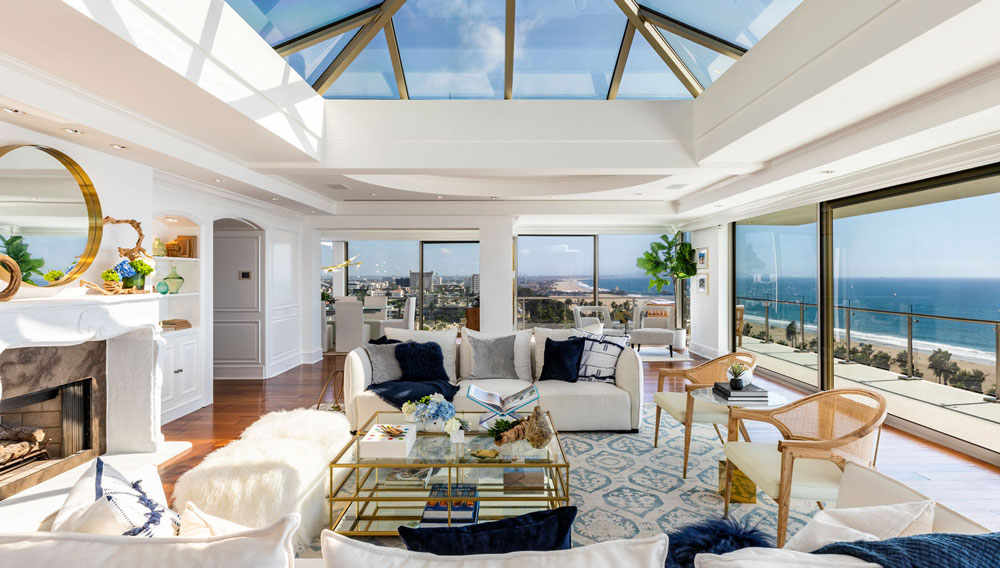 The preview event for the upcoming listing at 535 Ocean Ave. in Santa Monica didn’t have much of the fanfare typically associated with a $15 million+ penthouse in a fierce market.

No spotlights, no step-and-repeat, no valet parking. Unless you were invited, you would have had no idea anything special was going on upstairs at the expansive beachside building in Southern California. After a host checked off your name, you headed into an unassuming elevator—and, once the metal doors opened to the top floor, stepped into an immersive experience meant to market the penthouse in a unique way.

A woman fully dressed in 1960s garb presented attendees with a spiked Hot Dog on a Stick lemonade as soon as they stepped off the lift (an homage to the era in which the penthouse was built). Another host gave options: Head left to the kitchen and living room for more food and drinks; to the right, use the hashtag and get a gift bag.

As a follow-up to Robb Report’s previous trend story on marketing multi-million dollar homes, I checked out the second iteration of the collaborative Insta-House, which represents a new wave of launching—and ultimately selling—seven and eight-figure homes.

“We want you to feel like you’re a part of something,” says Society Group founder and CEO Alexander Ali, whose firm was responsible for many of the party details. For starters, the team lined the home’s right corridor with 1,100 perfectly spaced yellow pinwheels in an attempt to break the Guinness World Record for most pinwheels in one block.

This backdrop presented the first of many photo opportunities purposefully set up as a “choose your own adventure” tour of the renovated 8,000-square-foot residence. A horde of 20- and 30-something social media savants missed no opportunity to earn themselves a Jo Malone travel kit in the dressing room or Murad skincare gift bag in the guest bath.

Although the event attracted a mix of VIPs from across the LA social scene, it’s clear Insta-House was designed for its namesake: Instagram influencers looking for the perfect photo to send out to their content-hungry followers.

Beyond the gifting rooms, a large bedroom was filled with blown up beach balls playfully tossed on the bed and across the floor—another photo op not to be missed. A pair of women spent a considerable amount of time crafting that perfect, planned-yet-not-planned shot. Listing agent Rochelle Maize of Nourmand & Associates, Ali, and home staging company Vesta Home conceived the overall design and concept. (Maize, Nourmand & Associates, and Vesta split the production costs of the event.)

“It’s gotten a really good spin from people hearing about it,” Maize says, noting that several showings were scheduled just from word-of-mouth that trickled out from the event’s general buzz. Much of this hype stemmed from all of those influencers, who generated more than 668,000 Instagram impressions with a total social reach of 1.378 million.

Coupled with an aggressive invite campaign to the top real estate offices in the city, Maize’s legwork is certainly starting to see returns, even for a property that just went on the market officially two weeks ago.

It’s also proving to be a fruitful ground for a company like Vesta, whose CEO Julian Bucker says spent close to $500,000 in custom furniture, design, and labor for the launch. “We love these types of projects because it’s a soup-to-nuts process for us,” he says. “We’re in the business of selling a lifestyle.”

Vesta worked with Maize, Ali, and the owners to update the penthouse’s overall feel while retaining the 1960s California charm. The owners of the home invested around $150,000 in general updates, as the renovations were ones that would contribute to the overall marketability of the home. Vesta’s custom furnishings will stay in the home through its sale and will be offered to the owner as an additional purchase after closing.

Many of the 150 in attendance spent most of their time on the penthouse’s rooftop deck, which unsurprisingly had another photo op in the form of a trampoline photo booth. Guests were encouraged (after promptly signing a waiver) to hop on a trampoline that overlooked the southern vantage with the Santa Monica Pier lighting the sky behind the photos. This writer was eventually convinced to give it a go and has to say it was a joyous experience.

Ali argues this is all part of the changing face of luxury real estate marketing and advertising; it’s no longer enough just to announce a home. While Ali declined to provide an exact number for the cost of the event, he did say that it was of great value compared to what traditional announcement campaigns for this level of property typically cost. (It’s worth noting that donation of materials, time, and product from sponsors is not included in the general budget). Events like Insta-House also serve to benefit the social media stars, who have an ideal work environment ready to go with every post acting as a promotion for the home.

As we perused through the rest of the home, it was clear that the evening was intentionally set to feel like a glorified house party—one worthy of the investment in an eight-figure residence.

“People want to walk in a way and envision themselves living there,” Buckner says. “It needs to have an emotional impact.”