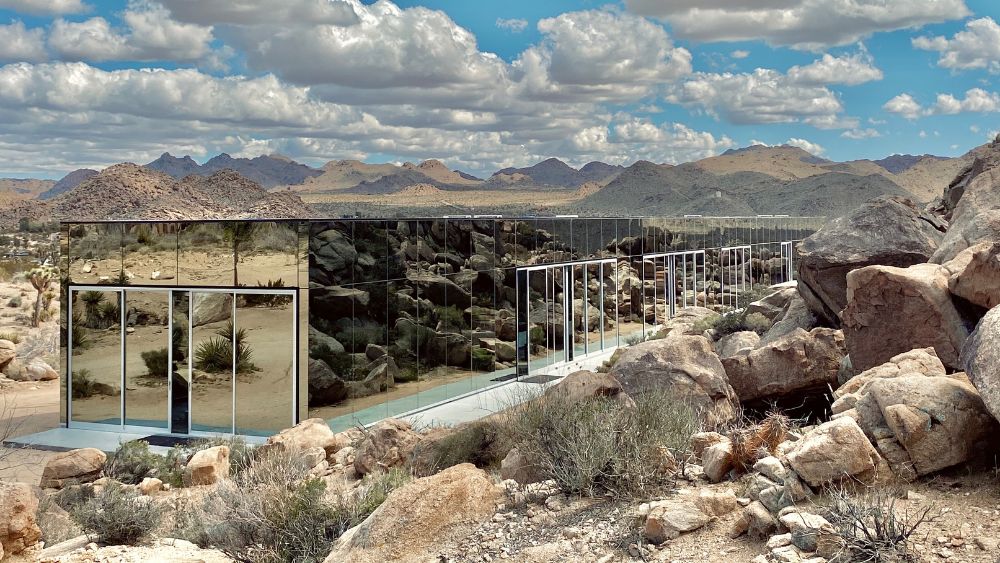 From far away, you might think your eyes are playing tricks on you. But look closely and you’ll discover one of architecture’s greatest optical illusions: the Invisible House.

Nestled in the middle of the Mojave Desert, the now-famous Joshua Tree residence has earned its name for its reflective glass exterior that mirrors the rocky landscape. Depending on the angle, time of day or even the weather, the minimalist structure seems to vanish among the national park’s rugged surroundings. Throughout the years, the Invisible House has made multiple TV cameos, served as a shooting location for advertising campaigns and captured the attention of A-listers. Though, the modernist abode’s biggest claim to fame is that its owners are indie film producers Chris and Roberta Hanley, best known for their work on American Psycho. And now the mirrored home can be yours—for $18 million, that is.

The couple, who bought the land in the early 2000s, had already built a vacation home on the 70-acre parcel but some years later, came to find out that its size didn’t adhere to local regulations. That led Chris to start sketching out plans for a new desert dwelling—one that was inspired by the 2001: A Space Odyssey film and reminiscent of a New York City skyscraper, reported The Wall Street Journal. “I just drew a rectangle on paper and said, ‘OK, we’ll build this,’” he told the publication. “I thought it could just be a monolithic, reflective, ultra-minimal thing.”

In collaboration with legendary Los Angeles architect Tomas Osinski, Chris completed the house in 2019. However, it took the two of them six years to finish the project. Measuring roughly 225 feet, one portion of the property is cantilevered off the ground using concrete columns, preventing it from disturbing the area’s giant boulders. Due to the site’s harsh temperatures, the facade is wrapped in heat-reflecting Solarcool glass, which is also what gives the exterior its mirror-like appearance. Plus, it also filters ultraviolet rays and infrared frequencies. Chris told the WSJ it took a full year for the glass to be delivered and it cost him around $700,000. Sustainability, of course, was top of mind during the building process, so you’ll find the abode as been equipped with eco-friendly foam roofing. In addition, the Invisible House employs a solar-thermal system to generate electricity and hot water.

The aesthetics here are decidedly minimal. Think concrete flooring, a few pieces of light-colored furniture and little else, as to not distract you from those stunning desert vistas. In total, the spread stretches 5,500 square feet and has three en suite bedrooms, a kitchen and a dining area. And if you’re looking to cool off from the region’s intense heat, the heart of the living room features a 100-foot indoor pool that can also be heated when the temperatures drop. In another standout element, the glass walls can actually open to the outdoors on three sides.

In the primary bedroom, meanwhile, you’ll find a bed that sits on a 2,500-pound glass frame. According to Chris, getting it inside was no easy feat—it took two days and five workers. Luckily, all the furnishings are included in the sale.

“Bringing the Invisible House to market for the first time ever is truly a once-in-a-lifetime opportunity,” said Aaron Kirman of AKG | Christie’s International Real Estate in a press statement. “Brought to life by a visionary film producer and a Frank Gehry collaborator, this architectural triumph located in the middle of the desert provides unique intangibles that can only be experienced at the property itself.”

Since its inception, Invisible House has welcomed celebrities such as Demi Lovato and Diplo, who rented the residence for an off-grid getaway. It also starred in season two of The World’s Most Amazing Vacation Rentals on Netflix and appeared on Bling Empire. Now, instead of just spending the weekend or swooning over this one-of-a-kind abode from afar, you can actually live there full-time if you’re willing to commit to desert living.

Click here to see all the photos of Joshua Tree’s Invisible House.