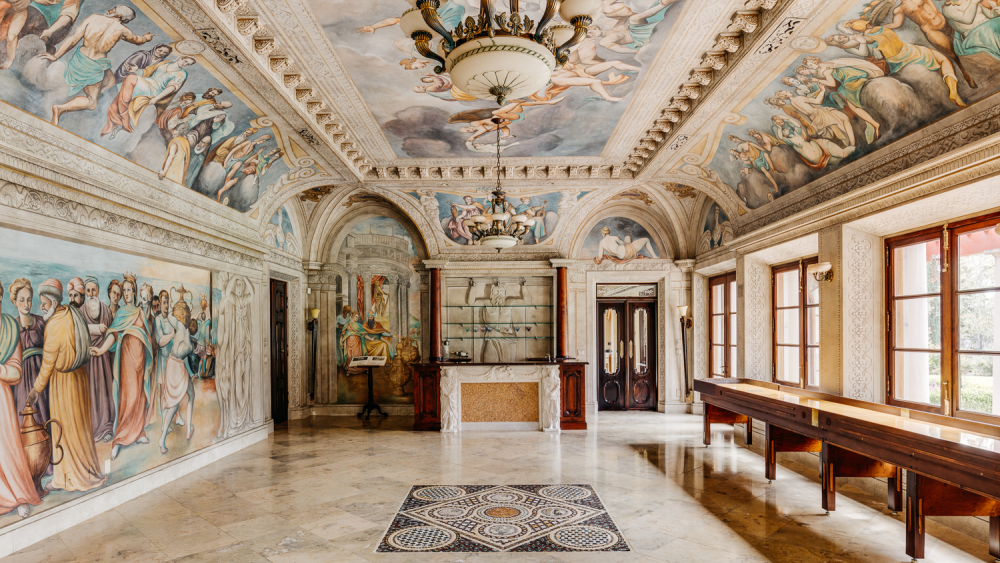 Photo: Courtesy of the Agency

Ever wondered what it would be like to live inside the Sistine Chapel? A home that just hit the San Francisco market might just offer a glimpse: Meet Villa La Sosta, a $18.9 million mansion so ornate it would surely impress Michelangelo himself. The Renaissance-style compound comes complete with a staggering 8,660 square feet of hand-painted murals, Ionic columns and carved marble figures.

Located just a hop, skip and a jump from the city’s main thoroughfare, La Sosta is situated in the much sought-after enclave of Ross, California. Its two acres of land ensure that there’s plenty of room to roam, but for La Sosta, it’s what’s on the inside that counts. Every detail of the home—from custom ironwork to hand-carved moldings to inlay mosaics—is handcrafted. (Alas, only the appliances remain bereft of La Sosta’s European inspiration.)

Murals fill every nook and cranny of the space, and tributes to Renaissance art abound. As a nod to the master, there’s even a statue eerily akin to Michelangelo’s David in the property’s gardens.

A birds-eye view of Villa La Sosta.  Photo: Courtesy of The Agency

“It has this rustic Old World feel to it, but it’s not a house that’s a couple hundred years old,” Rachel Swann of the Agency, who holds the listing, told luxury real estate site Mansion Global. “I’ve had people come through who are from Italy and comment about the level of detail, and how spot-on [it] is.”

Once you’re through ogling at the vast swath of paintings, the six-bedroom, 10-bath home still has a few other tricks up its bespoke sleeve. The master suite features hand-crafted doors, an indoor jacuzzi and a closet with custom cabinetry, while the living room is anchored by a large fireplace on one end and a bar with marble figures at the other.

Another view of the Great Room.  Photo: Courtesy of the Agency

Also on the ground floor are the dining room and kitchen—you can even catch a glimpse one of the property’s water fountains when the doors open to the outside terrace. And if you and your guests would rather hit the court, La Sosta comes fully equipped with a tennis court, a separate pool pavilion and a bocce ball court, á la its European influences.

Of course, we’ll give credit where credit is due for the home’s current opulence. The owners, Art and Sherry Valdez, oversaw its custom build, transforming it into the getaway it is today—one deserving of its name, which loosely translates to “the resting place.”

Check out more photos of Villa La Sosta below:

One of La Sosta’s grand fireplaces.  Photo: Courtesy of the Agency

Barrel-vaulted and groined ceilings run throughout the property.  Photo: Courtesy of the Agency

A jacuzzi sits adjacent to a fireplace in the master bedroom.  Photo: Courtesy of the Agency

One of the many statues presiding over the La Sosta.  Photo: Courtesy of the Agency