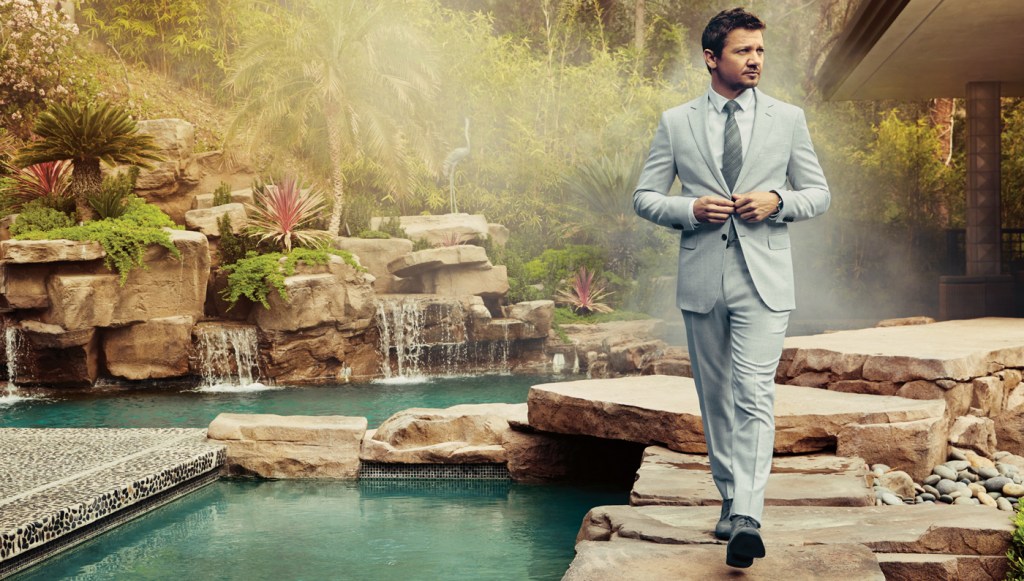 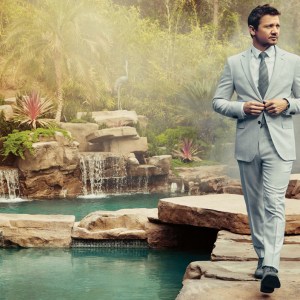 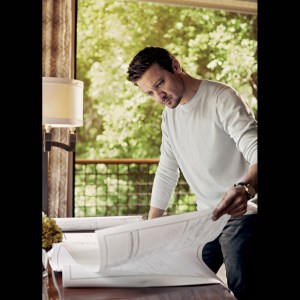 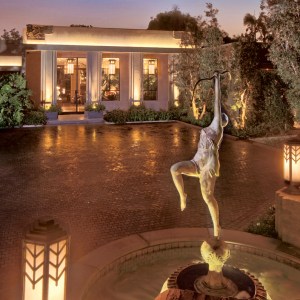 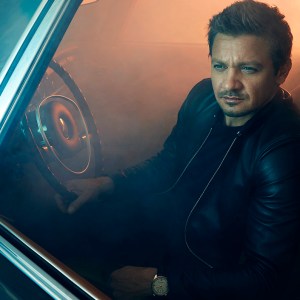 Actor Jeremy Renner leads a dual life as a bow-wielding superhero and a forward-thinking real estate developer. Here he shares with David Hochman his secrets to designing a home with character.

Jeremy Renner likes to break down walls. This is not a metaphor, although as an actor he certainly smashes expectations in almost every role he plays. As the maverick Army bomb-disposal expert in The Hurt Locker, Renner earned an Academy Award nomination not for his toughness but for his openhearted tenderness. He is equally surprising in Marvel’s Avengers series as the master archer Hawkeye, a superhero without any real superpowers—a role Renner, 45, reprises in this month’s blockbuster Captain America: Civil War.

Yet his work in another realm—home design and development—brings a different aspect of Renner’s creative vision to the forefront. With his real estate partner, Kristoffer Winters, Renner has acquired, renovated, and sold more than two dozen Southern California homes since the early 2000s, including a Holmby Hills estate that was purchased in 2013 by Christian Candy, brother of luxury property developer Nick Candy, for $24 million.

Renner, who also runs his own production company, spoke with Robb Report about a mega-successful career that defies convention in Hollywood and beyond.

With both, to stay at the top of the ladder, you have to be all in. There’s no half-assing it. I see them as similar pursuits. Both can be hugely rewarding creatively and financially. Both take a sense of daring and risk. Whether you’re producing a movie or turning around a property, you’re managing people, you’re putting out fires, you’re problem solving, you’re working to stay on time and on budget, and you focus on the tiny details that add up to greatness.

Your Marvel character, Hawkeye, is known for his precision and infallible vision. Sounds like he would thrive as a developer.

There’s a lot of me in Hawkeye, and those qualities do translate to my other career. With the houses we build, I make all the decisions about design, materials, fabrics, furniture, everything. These homes are beyond turnkey; they’re fully loaded. Fresh-cut flowers, linens, towels, the whole bit. You just bring some clothes, and you’re good to go.

How do you personalize a property when you don’t know the people who will come to own it?

My job is to give you an elegant clean slate to make your own. We use a very neutral color palette and don’t go nuts with, say, canary-yellow baths. One of the gals who bought a home of ours came in and painted the kitchen pink. That’s awesome, but it was her choice. I err on the side of masculine and richness. I’ll take a charcoal mohair sofa over a purple couch any day. The buyer can bring in those things or just add some throw pillows.

Is it true you were sleeping in a house without utilities the year you got your Oscar nomination for best actor for The Hurt Locker?

Dude, in the beginning we lived in almost all the houses we were building. We’d invest all our money and wouldn’t have a cent left. During that Academy Awards push, the house was almost done, but it still didn’t have running water or heat. I was sleeping in a tent on hardwood floors to keep the dust off me. Then I’d throw on a tuxedo, jump in a limo, and stop at Starbucks so I could brush my teeth.

How has your approach to California’s high-end real estate market changed since you started in the early 2000s?

Kristoffer and I started on a smaller scale. We spent about $640,000 on our first midcentury-modern house up in Nichols Canyon in 2002 and sold it a few months later for around $900,000. That was pretty exciting, but we sensed we could go bigger. Most of our properties have sold between $3 million and $5 million and a few for much, much more. We’ve done modern, Spanish style, Greek revival, and we’ve gotten way smarter along the way. You don’t want power lines running through a beautiful view. You never want to set the record for price per square footage in your neighborhood. Ultimately, you want to turn around the ugly-turd house on a beautiful street. We’ve gotten better at doing that.

Have the concepts of luxury and connoisseurship evolved in the last decade, particularly since the onset of the recession?

Well, we’ve seen different phases. A few years ago, we saw more Russians wanting to park their money in a safer economy here in the U.S. That was an anything-goes period as far as investment. Now there’s more of an emphasis on craftsmanship, on fine finishes. You’re not just buying a house; this is your life. You want the things you see and touch to be exceptional. If you’re spending $24 million on a home, you don’t want to fill it with lamps from Home Depot. That’s not my style. My brother will say, “Dude, did you just spend that much money on a curtain panel?” I’m like, “Hey, you want things to look good!”

What about technology? How are new advances shaping the homes you build?

Look at all the stuff you can control with your phone. It’s phenomenal. Sonos brings music into the home, room by room, with the touch of an iPhone button and without the need for complicated wiring. With Nest, I can control the temperature from my car so my house is nice and toasty when I walk in. August lets you answer your doorbell from work and even unlock your door remotely. It’s like having a personal assistant in your pocket. Lutron gives you the efficiency of LED lighting without the look of a dentist’s office. They’ve gotten it so the glow is similar to incandescent lights, and again, you can turn them on with an app. As long as we look up from our damned screens once in a while, we can use these amazing advances to our advantage.

How are the homes you live in different from the ones you develop to sell?

I split my time between a house in Lake Tahoe and my home in Los Angeles. In both, I spent money on things I wouldn’t have done in a spec home. I installed a massive solar-panel package that’s one of the biggest in L.A. You’d never do that on a house you’re going to sell, because it takes four or five years to get your money back on the investment. I wouldn’t have built a giant lagoon with a dive bridge and waterfall sculpted by the guys who do it for the San Diego Zoo. That’s a little too radical for some buyers, but I’m building a house I’m going to live in for the rest of my years. It’s about my taste and my desires.

What do you do with your limited spare time?

Actually, I took six months off recently so I could be with my daughter and record a bunch of music. I was a musician before I was an actor, and I’ve been putting together an album that’s finally almost done. I’m also a motorcycle guy who’s been riding all my life. I have a BMW, two Harleys, and a Triumph Speed Triple. The one I’m most proud of is this beautiful Norton Commando. There were only 50 of them made, and it’s mostly a garage piece, but it’s gotta be driven. Staying close to home has been deeply satisfying. I’ve spent so much time and energy and money and life building these houses, but I was never there. It’s nice to just sit and enjoy the rewards for a minute.

What are some of the design hallmarks of the homes you build?

In terms of style, everything goes: I just completed a mid-century modern. We’ve done lots of Spanish style, Greek Revival. A home is place where you spend your life, so I think about things like space and flow. That’s what I’m good at. You gotta be comfortable. You don’t want too much furniture in a place and you don’t want it to be too sparse. I design a bedroom without any sharp objects, for instance, because I don’t want to bump into anything when I’m going for the light switch in the middle of the night. The flow should work so well that even if it’s your first time in the home, you could find that switch without a problem. Most people have no idea why they like something. It’s usually an emotional thing. But I try to identify what makes a room feel good.

Where do you find your design ideas?

I get inspiration from great hotels. I love The Greenwich Hotel in Tribeca. The beds are really nice. It doesn’t feel like mass-produced furniture. The lighting is soft and gorgeous. The floors are antique. You feel like there’s history there. It is more like a home. Soho House in Berlin feels that way, too. I love how comfortable The Charlotte Street Hotel is in London. The same team also does the Covent Garden Hotel. It’s all about creating an atmosphere, whether it’s a hotel or a home. You want it to be elegant. You want every room to be sexy. My guide is: I want to be able to walk around in this room naked and feel fantastic.

The Robb Report photo shoot took place at your mid-century modern house. What were the challenges of building in that style?

Modern can be cold with its hard lines. But I had the benefit of having lots of ceiling height and a lot of glass. For this house, I wanted to have an indoor-outdoor feel, so I used the same stone inside and out. It’s kind of a Japanese or Hawaiian-resort feel, but I borrowed ideas from Frank Lloyd Wright as well. I wanted to add Wright-esque handmade tiles on wing walls with lighting that makes the tiles look three-dimensional. Really, the house told me what it needed.

Do you see more acting in your future or real estate?

I’m lucky in that I feel like I can do a lot of things: Acting, real estate. I’m recording a bunch of music. If I never want to work again as an actor, I can do that. That’s a good feeling. Right now, I want to stay close to my daughter and not be ripped away overseas to make a big action movie. Being with my daughter is the most important thing for me. In the meantime, I’m focusing on the two houses I own and live in. I’m not actively looking for new property at the moment. But, hey, you never know what will come up.

The May 2016 issue of Robb Report is available on newsstands April 19.