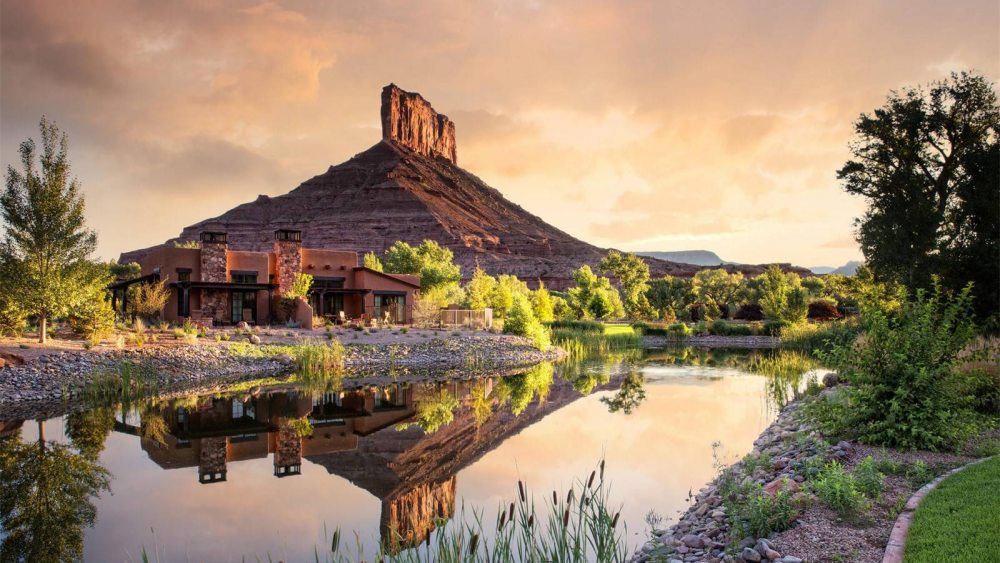 Don’t call the Mythbusters on this one. Discovery Channel founder John Hendricks really did just list his home, resort and car museum—for a whopping $279 million.

“The real joy of being located 45 miles from the nearest city is the remarkably clear night sky—no light pollution to spoil stargazing,” Hendricks told the Wall Street Journal of the 400-square-foot observatory. “Viewing the Milky Way and celestial objects like the Andromeda Galaxy is amazing.”

So while the parcel is practically a city in it of itself, the ranch remains remote, about 60 miles away from the closest airport. Of course, you probably won’t need to make too many trips to the jetway, as there’s an airplane hangar, grass airstrip and two helipads already on the premises. Hendricks will even throw a complementary helicopter into the mix.

Another view of the main residence.  Photo: Courtesy of LIV Sotheby's International Realty

To be sure, Hendricks’s resort and residency empire is among one of the most picturesque locales in Colorado. Situated amid the Cottonwood Red Rock Canyon, resort guests—or 8,700 acre land owners—can hike the La Sal Mountain range or walk along the winding Dolores River. There are also many trophy-class hunting opportunities available, with herds of 10,000 elk and 17,000 mule deer on the Uncompahgre Plateau.

As a decidedly urbane bonus, the resort is also a museum of sorts. Hendricks was quite the car collector, and he constructed an open-to-the-public auto museum as part of the Gateway Canyons Ranches & Resort portfolio. The Gateway Auto Museum houses over 50 cars from Hendricks’s personal collection, including a 1967 Shelby GT500. All vintage vehicles will be left to the future owner.

Finally, there’s Gateway Canyons Resort & Spa, a full-service luxury resort that Hendricks built in the mid-2000s. Hendricks reportedly did not intend to sell the resort as part of the Gateway package, but felt he was spending less time on the property as a whole. Plus, people reportedly kept inquiring about it.

If for some reason all that real estate isn’t enough for you, Hendricks also secured the necessary approvals to build 371 single-family homes or condos on the site, should the new owner be inclined to share all the natural majesty. Alternatively, you can just kick back, relax and revel in the fact that you own perhaps the impressive ranch ever built.