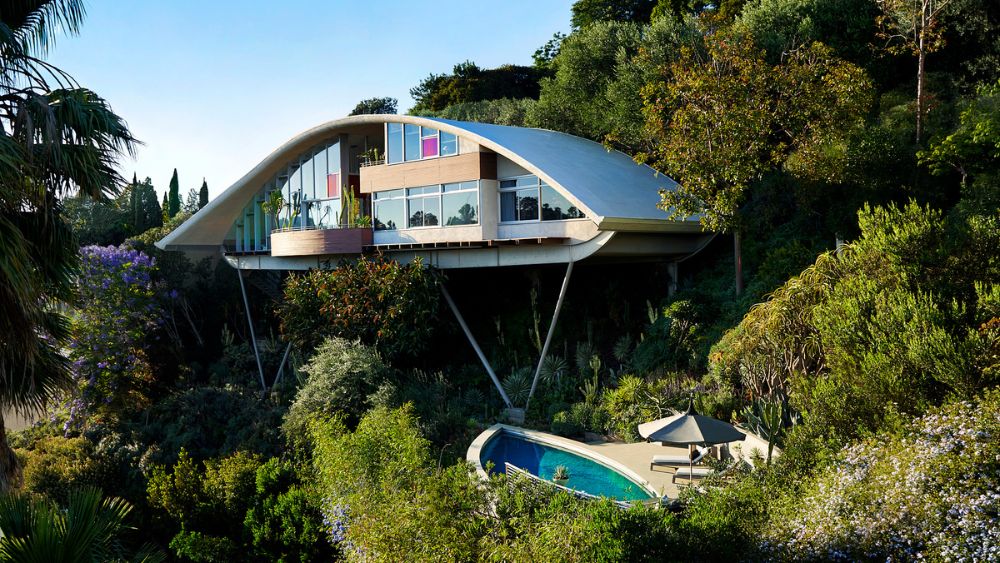 Remember that scene in Lethal Weapon 2 when Mel Gibson dragged a glassy manse down a hill with just his truck? Thankfully, the home in question was just a replica, but the real-life version of that modernist masterpiece is up for grabs for the first time in 20 years.

Built in the ‘60s by late California architect John Lautner, the Garcia House is one of the most significant midcentury properties in all of Los Angeles. Mirroring the shape of an almond—or a rainbow, depending on who you ask—the Mulholland Drive dwelling appears to defy gravity. That’s because it’s actually floating 60 feet off the ground on stilts. Its owners, Broadway producer Bill Damaschke and his partner, John McIlwee, bought the abode back in 2002 and are now offering up their prized pad for a cool $16 million, reported The Wall Street Journal.

“This isn’t one of those houses where you’re basing it off price per square foot. We’re basically going to market it as an art piece that fortunately you can live in,” listing agent Weston Littlefield of AKG | Christie’s International Real Estate, told WSJ. Spanning 2,600 square feet, the residence has three bedrooms, three and a half bathrooms and even includes an ellipse-shaped pool, which was added in 2008 using Lautner’s original design. In 2012, the home underwent a massive renovation led by Leo Marmol of Marmol Radziner, the same architecture firm that restored Richard Neutra’s Kaufmann Desert House in Palm Springs.

“The Garcia House is just such a beautifully exuberant, graceful structure,” managing partner Leo Marmol told the publication. “Lautner’s work is always such a celebration but, with this project in particular, the scale is so small and delicate.” It took the team roughly a year and $1 million to complete the remodel, but rest assured all the updates adhere to Lautner’s style. You’ll find original terrazzo flooring throughout, lava rock walls and colorful stained-glass panels. Some of its most defining features include soaring 30-foot windows, a large spiral staircase that connects the living area to the bedrooms and, of course, its sweeping, parabolic roof.

“This house has changed our lives, but 20 years is a long time,” McIlwee told WSJ. “We’ve kind of experienced everything we’re going to experience here. We’re ready to pass the torch.”

Click here to see all the photos of the Garcia House.