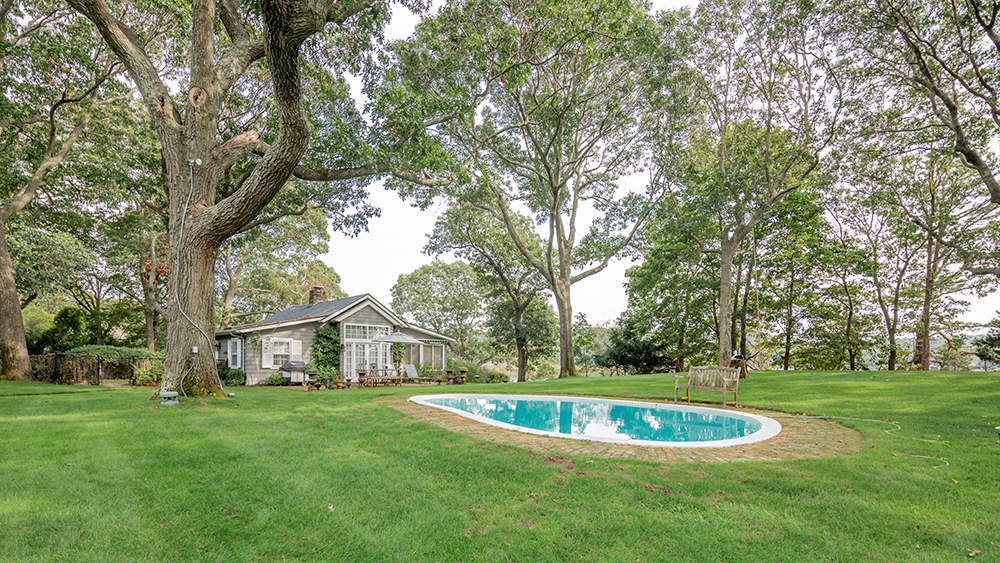 Many great authors have a secluded retreat where they can hole up and get some of their best work done: For George Orwell it was a remote Scottish Island, for Dylan Thomas it was a small boathouse in Wales and for John Steinbeck it was his “little fishing place” in Sag Harbor, at the eastern end of New York’s Long Island. The latter is now up for grabs for $17.9 million—great news for those who are experiencing a bout of writer’s block.

Steinbeck bought the property in 1955 with his wife, Elaine Anderson Steinbeck. He had just finished East of Eden—in fact, a sign that says “Eden” used to sit next to the main residence’s front door, according to the Long Island Press. The home itself isn’t a palatial mansion by any means, but rather a humble cottage of about 1,200 square feet. The Steinbecks installed a “library loft” there, an area surrounded by bookshelves where the kids can play. It overlooks the central living area.

But there’s certainly room for a grander residence on the 1.8-acre, waterfront parcel. Steinbeck penned his final novel here, Winter of Our Discontent—the story is set in a Long Island town that was likely inspired by his digs at the time. He had his own “writing cottage” out on the water that remains to this day, there’s also a separate guest cottage—dubbed the “cozy cabin” for it’s, uh, lack of space, that can sleep two.

The estate has 586 feet of water frontage at the enviable end of the peninsula, as well as a pool, or “cement pond” as Steinbeck reportedly called it. A 60-foot dock stretches out onto the bay where future owners can launch a boat or kayak.

According to the New York Times the home is being sold through a trust set up by Elaine Steinbeck prior to her death. It’s a great place to get away and get some writing done; it’s only 1.2 miles from the town center if you’d prefer to see the sights. Steinbeck himself would pay visits to Sag Harbor proper, walking around in a fisherman’s cap and rubber boots with his dog, Charley (of Travels with Charley fame). In the words of the great author himself: “And do you know, journalism, even my version of it, gives me the crazy desire to go out to my little house on the point, to sharpen fifty pencils, and put out a yellow pad.”

An aerial view of the property in winter.  Photo: Gavin Zeigler/Sotheby’s International Realty

A view from the dock.  Photo: Gavin Zeigler/Sotheby’s International Realty