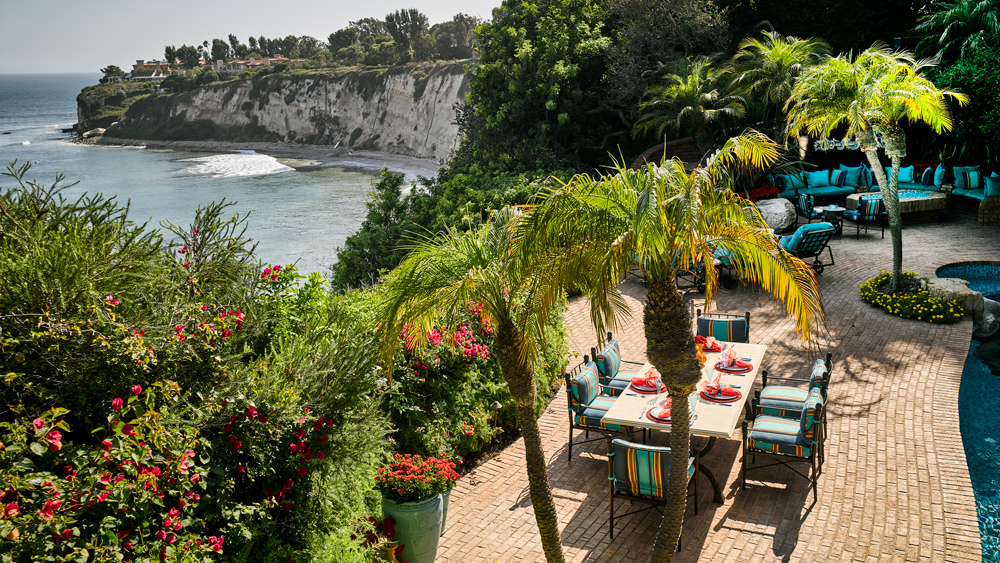 Johnny Carson, the iconic host of The Tonight Show Starring Johnny Carson, was arguably one of the most influential figures from television’s golden age. Now the late star’s former Malibu estate, which he called home for 20 years, is on the market for $81.5 million.

Seemingly designed as a hideaway from the Hollywood hustle, the four-bedroom house is tucked into a trove of plants overlooking the Pacific Ocean. Perched high above the bluffs on Point Dume, the home was built by modernist architect Ed Niles in 1978 and made of triangles clad with mahogany and glass partitions. The 7,083-square-foot estate is currently owned by film producer Sidney Kimmel and his wife Caroline, who bought the property in 2007.

The light-filled living room with 30-foot glass walls serves as the centerpiece of the angular home, and a striking gold sunburst sculpture rounds out the triangular edges. A copper-and-glass sunken fireplace flows into the Asian-inspired bar and lounge, which is adjoined by a verdant arboretum.

The master suite, which occupies the entirety of the second floor and offers panoramic ocean views, is equipped with his-and-her bathrooms set with onyx stone, walk-in closets, and a glass-encased office that formerly served as Carson’s workspace. Hints of Asian influences are showcased in the Chinese figurines and fine porcelain, and a distinct emphasis on integrating nature puts the home’s feng shui at the forefront. Eucalyptus, coral, and pepper trees are framed by glass walls, while ocean views from every room emphasize the home’s exceptional locale.

Outside, a saltwater swimming pool and lounge with an adjacent waterfall and koi pond (with fish stocked by Carson himself) are set into the bluff. A few steps above the pool is an integrated rock wall and manicured lawn where a dining facility showcases the property’s best views. A tennis pavilion spanning the length of the championship tennis court is equipped with a living room, gym, and sauna where Carson’s friends enjoyed tennis matches and cocktails as a pastime. Another relic from the King of Late Night is a bench from Wimbledon given to Carson upon his retirement from NBC.