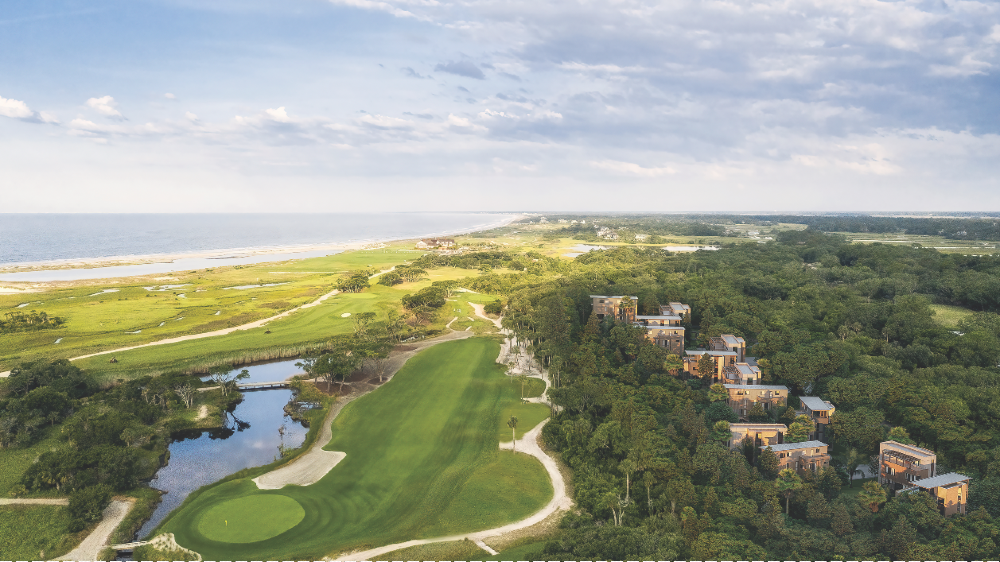 While the pandemic took hold of the world, two industries, often entwined, took off. Golf enjoyed its largest influx of players in more than a decade, while the real estate market seemed to rise past the earth’s orbit on its way to other parts of the galaxy. There is a long and often uninteresting marriage between golf and real estate in this country, with one too many bland developments cropping up over the last fifty years. But for the places that got it right the first time, these last two years have brought a windfall.

One such place is the legendary Kiawah Island, the South Carolina private golf and residential barrier island set southwest of Charleston. Kiawah Island Real Estate reports that in 2021 they sold $1 billion in executed contracts, the most in their 45-year history and a 40-percent increase over $567.9 million in 2020, and an eye-popping 299-percent increase from 2019’s closed volume of $199.5 million.

The current demand can be seen in one of the island’s newer projects. South Street Partners has just two homes left in their initial offering of thirteen from their Front Nine Lane development, a collection of residences clustered near the world-famous Ocean Course. The homes, designed by architectural firm Lake/Flato, went on sale in 2020 at a starting price tag of $3.3 million dollars. Boom time prices for the last two are now at $4.2 million. The pricing—and scarcity—reflect the frenzy of relocation accelerated by the pandemic, as more people are living the work-from-anywhere life.

South Street Partners own the remaining parcels of land that can be developed on Kiawah, which is an environmental preserve. Accordingly, Front Nine Lane was created with a minimal footprint in mind. The vertical structures feature outdoor living spaces on the bottom, with smaller bedrooms opening up into expansive common areas to promote familial interaction and to absorb the natural surroundings of Kiawah’s marsh landscape. Third floors hold master suites that overlook the first hole of the Ocean Course and offer extended views of the Atlantic Ocean in the distance.

This spring South Street will start a new development on Cassique, a private golf club the company manages. Similar in size, scale and price point to Front Nine Lane, the Burn, as the development is called, will overlook the second hole of the course. Chris Randolph, a partner for South Street, said the impetus for the build wasn’t just demand. “The value proposition there and why we’re doing it is that those homes will be the closest homes within Kiawah to Charleston,” he says. Randolph adds that Cassique is not technically part of the gated community of Kiawah—the two developments, so to speak, share the same entry road—and also noted the Burn’s proximity to Freshfields Village, a retail development with a grocery store and restaurants that opened in the last ten years, add to the appeal of the new homes. The Burn’s homes will start $4 million and will range in size from 3,392 square feet up to 3,745 square feet. They have also “been sited to accommodate a pool,” Randolph says.

The Burn residences are zoned to have pools.  Kiawah Island Real Estate

The appeal of Front Nine Lane and the Burn for buyers, notes Randolph, is the ease of everything. The pre-designed layouts allow for customization of finishes but also allow the construction team to take advantage of economies of scale, ordering the same materials all at once for all seven properties. That passes some monetary savings on to the buyer, but it mostly passes on efficiency in terms of less construction time versus a customized build from the ground up. South Street can usually cut the construction time for new buyers in projects like Front Nine Lane and the Burn by six months so that buyers are often able to move in within a year of the purchase.

The expansion on Kiawah will be limited in the future, however. Last summer there were 140 homesites left on the island; Randolph said that number is now down to “fifty or sixty”, including a few remaining parcels of land for high density development such as townhomes. Of the remaining land zoned for single family homes, the price ranges from $700,000 to $2 million, with the more expensive lots having ocean views.

As of this writing, there are also a couple private islands available for sale, both of which include membership to the Kiawah Island Club: The 11.37-acre Captain Maynards Island, encircled by a saltwater river and creek, is listed for $17.75 million, while the 25-acre Cougar Island, tucked into a curve of Bass Creek, is $12.5 million. Given the current desire for golf community residences—and homes that celebrate indoor-outdoor living—it’s no telling how much longer any of these sites will be on the market.