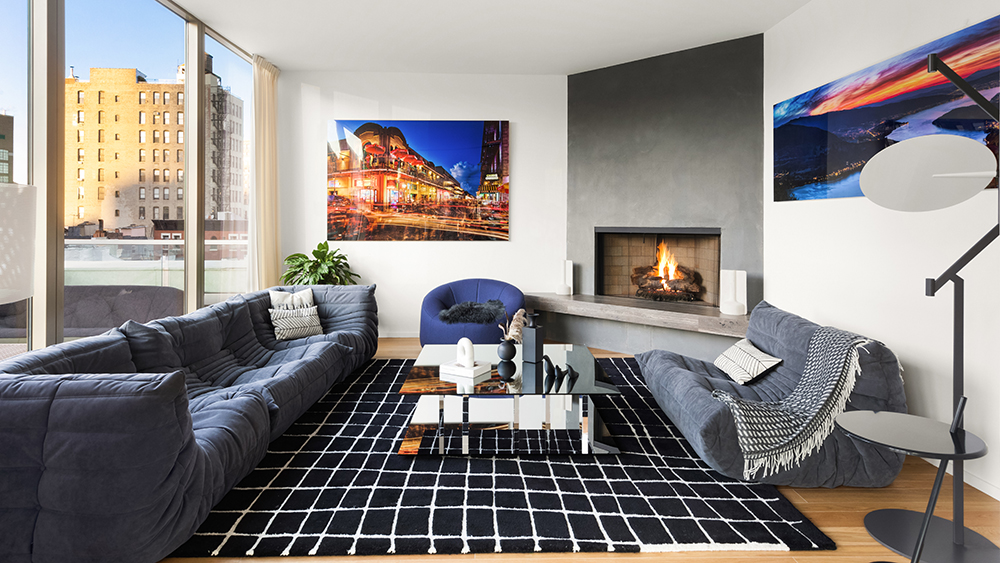 New York City’s real estate marketplace may be slow, but apparently no one told 75 Kenmare. 27 of the luxury Nolita building’s 38 units have sold this year alone, according to listings site StreetEasy, leaving few left up for grabs. So what’s the appeal? The fact that it’s not overstuffed with condos is certainly one, giving the place a heightened sense of privacy. But the stylish interiors, courtesy of Lenny Kravitz’s very own Kravitz Design, are certainly another. And for those who still want to buy in, you’re in luck—Penthouse B, a $7.7 million duplex unit staged by the French furniture giant Ligne Roset, has just been unveiled.

When they approached the 2,100-square-foot unit, Ligne Roset wanted the interiors to match the rest of the building—that is, incorporate the same different materials and textures that Kravitz Design implemented elsewhere, including smooth stones, textured metals and solid oak.

With many windows, it’s a truly light-filled residence.  Evan Joseph

Color was also a big factor. Brighter hues pops here and there, of course, the space also offers areas that are a bit more pared back. The living room, for instance, features one of the brand’s most well-known pieces: the pleated, Togo sectional which is a more neutral, earthy blue color—a juxtaposition to the bold, cerulean pumpkin chair in the same space. According to Simone Vingerhoets-Ziesmann, the managing director of Ligne Roset Americas, the neutral and blue tones are a reference to the concrete jungle meeting the night sky.

Every piece of furniture is from Ligne Roset’s line, from the beds to the taupe and green chairs on the terrace. There are other names involved in the project, though—the kitchen is fully equipped with Gaggenau appliances, and six landscape portraits by photographer Nathan Myhrvold of Modernist Cuisine Gallery hang on walls throughout the unit. The latter is especially noteworthy as it’s the first time that the former Microsoft CTO’s work will be shown in New York City, as per developer Dan Hollander of DHA Capital.

One of the bedrooms; one of Nathan Myhrvold’s landscape photographs hangs above.  Evan Joseph

Building amenities include an automated parking garage, 24-hour concierge, a fully equipped gym, courtyard and rooftop space. All feature finishes carefully selected by the Kravitz Design team, from the wooden-slat screens in the gym to the quartzite and travertine floors in the lobby. 75 Kenmare marks Kravitz Design’s full-building interior design in New York City. Fredrik Eklund and John Gomes of Douglas Elliman, meanwhile, are handling sales.

In other words, virtually everything here is carefully considered. Want a better look? You can check out more photos of the Nolita digs, below:

A duplex unit, the bedrooms are all upstairs.  Evan Joseph

The primary bathroom, which has heated floors and walls and a rain shower.  Evan Joseph

The outdoor terrace is also furnished by Ligne Roset.