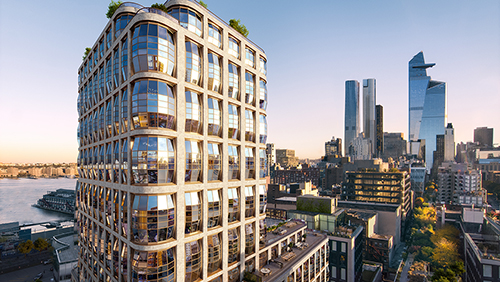 Lantern House is not like other condo towers. The first US residential project by renowned designer Thomas Heatherwick—nowadays he’s best known for his work on the woefully Insta-worthy Vessel at Hudson Yards—Lantern House is distinguished by its bulbous windows that were inspired by, well, oil lanterns. Now that construction is (mostly) complete, we can get a closer look inside the building, comprised of two separate towers connected by a central lobby beneath the High Line, starting with a $5.5 million model residence designed and staged by interior design studio March and White Design.

The firm was involved with Lantern House from top to bottom, having designed its lobby and amenity spaces. “We got to work with Thomas early on in the process of developing the bay windows, so interiors and architecture were having a conversation right from the get-go, which is fantastic,” principal Elliot March tells Robb Report. “It was definitely an interesting process. We were really taken aback by the windows, which were so expressive. We thought, ‘Wow, this is a great opportunity to play with daylight.'”

March and White designed the rooms to feel open, letting natural light—which, refracted through the bay windows, creates all sorts of interesting patterns—be the star. The biggest challenge, though, was designing within the bay windows themselves. Here, the interior designers came up with a few different solutions—you can place a couch there for lounging, run a bar across it for working during the day and unwinding with a drink at night or let it stand on its own.

One of the bedrooms, which has a desk space in its bay window.  Photo: Courtesy of Related Companies by Colin Miller

The model’s furnishings, meanwhile, don’t feel too formal—March and White wanted to create a laid-back, lived-in vibe that didn’t seem too staged—so the fabrics and leathers are all distressed rather than completely crisp. This particular three-bedroom is designed to be a family home, a buyer profile that March notes was top-of-mind for Lantern House. “It’s very much a New York buyer, someone from the Upper East or Upper West Side who wants to be more in the gallery district,” March says.

The kitchen.  Photo: Courtesy of Related Companies by Colin Miller

Of course, the model residence is just a small piece of Lantern House—condos run from about $1.6 million for a one-bedroom to $17 million for a penthouse. Or, if you like this unit well enough, you can just move right in.

The study.  Photo: Courtesy of Related Companies by Colin Miller

The bathroom.  Photo: Courtesy of Related Companies by Colin Miller

Another bedroom.  Photo: Courtesy of Related Companies by Colin Miller