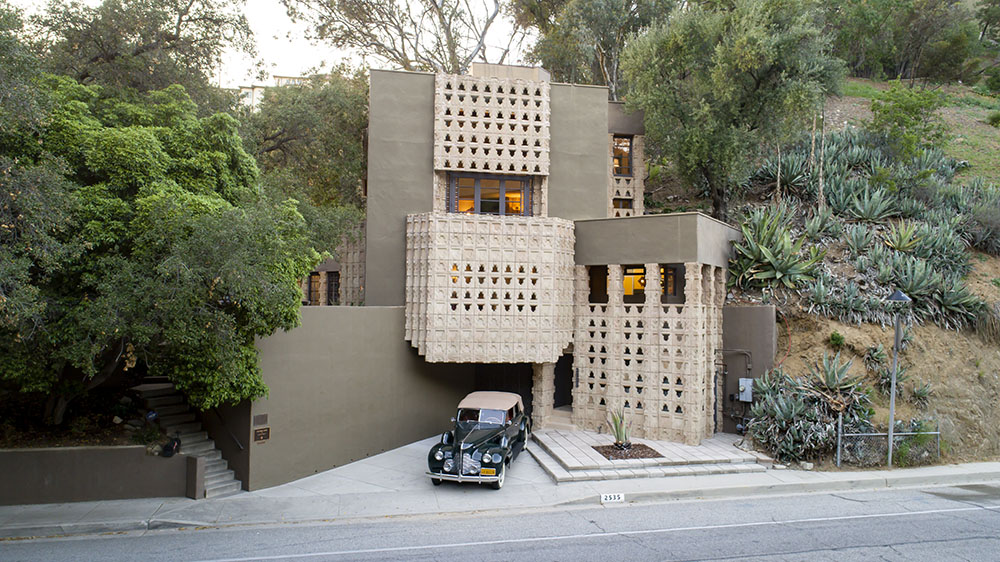 If you’ve been hoping to own a piece of architectural history, now might be your chance.

Derby House—designed by Lloyd Wright, son of famed American architect Frank Lloyd Wright—is on the market for just under $3.3 million. Built in 1926 for the businessman James Daniel Derby and his family, the Glendale, Calif. home is best known for its distinctive façade, designed with concrete ornamentation inspired by Mayan architecture.

But the home’s interior is just as stunning. The two-story, five-bed, three-bath house features open living spaces, a hexagonal dining room and a floor-to-ceiling fireplace within its 3,300 square feet. Accents throughout­—such as the garage and fireplace grates, French door grills and closets—mimic the surrounding yucca plants, a nod to Wright’s practice of integrating nature and design, a practice he inherited from his father.

Most of the house is made of concrete, wood and glass, allowing the space to feel light-filled and airy, especially the double-height living room. Purple- and pink-tiled bathrooms lend some color to the otherwise neutral, earth-tone home.

The floor-to-ceiling fireplace is a highlight of the living area.  Open House Foto

Situated on 1.5 acres of land across four adjacent lots, the house has plenty of outdoor space to enjoy as well. There are traditional patio areas along with an elevated terrace for lounging or dining, and the home looks out onto the neighborhood’s trees and woods.

Wright never quite reached the same level of fame as his father, but he did create some exceptional buildings throughout Los Angeles, such as the Wayfarers Chapel in Palos Verdes and the John Sowden House in Los Feliz. “Lloyd Wright was extremely versatile, much more so than his father,” the late architectural historian David Gebhard told the Los Angeles Times in 1993. “And he was a meticulous craftsman. In some ways, his concrete-block designs have held up better through the years than his father’s better-known work.”

Listed on the National Register of Historic Places, the Derby House previously sold for $2.3 million in 2016 to Jeffrey Sanfilippo, the CEO of John B. Sanfilippo & Son, a nut distributor.

This time, it’s listed as furnished, so don’t worry about finding furniture to match the grandeur of the home itself.

Check out more images of the Derby House below.

One of the houses’ bedrooms looks out onto the terrace.  Open House Foto

The dining area features the same concrete designs as the exterior of the home.  Open House Foto

Another view of the living space  Open House Foto