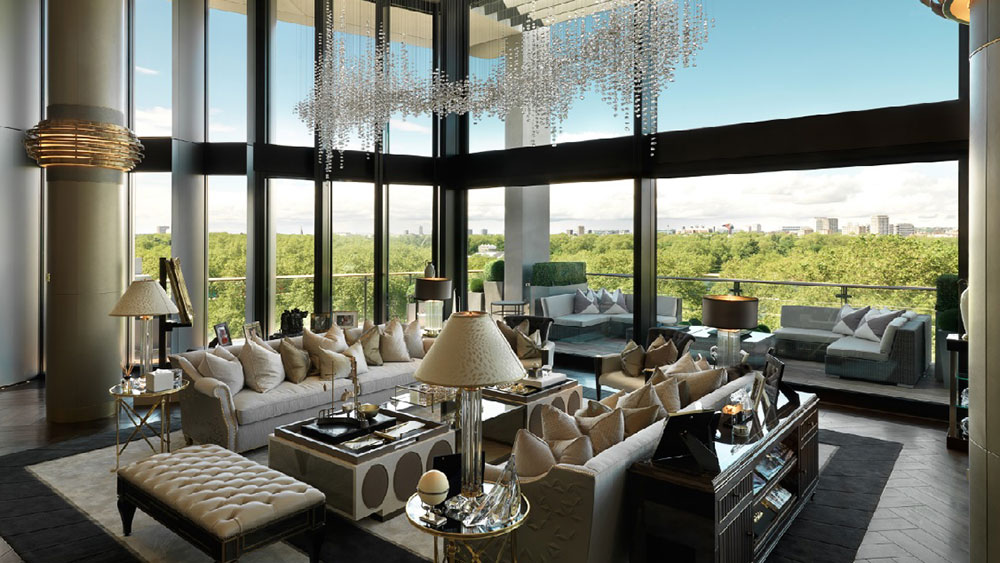 Got a few spare Bitcoins sitting around in cyberspace? If you’ve amassed a big enough purse, you may be able to trade in the cryptocurrency for a more IRL asset—a massive, 18,000-square-foot penthouse in London, which has just listed for about $244 million at current exchange.

The glitzy condo is located at One Hyde Park, an ultra-high-end apartment complex in Knightsbridge on the edge of Hyde Park that’s often cited as the poshest neighborhood in all of London. It was developed by CPC Group and Waterknights. The former is the venture of Christian Candy, a British real estate mogul who, along with his older brother, Nick Candy, has made a habit of buying old buildings, sprucing them up with luxury condos and selling them for millions.

Nick Candy’s latest project adds to his reputation as a design-forward developer. The sprawling penthouse is a duplex, with about 9,000 square feet of space on each level. It has five bedrooms, although it can be converted into a seven-bed apartment. The primary suite is by far the best of the sleeping quarters, with 270-degree views of Hyde Park, two en-suite dressing rooms and two bathrooms.

It’s an impressive home from the moment you cross the threshold—guests are greeted by a double-height reception room, complete with a bespoke glass fireplace. The kitchen is inspired by Japanese design and includes a temperature-controlled wine room that can hold up to 750 bottles. Altogether, the digs include not one, but two wraparound terraces.

It’s designed with the 2021 workplace in mind, too. The home comes with two studies that are great for taking meetings and making conference calls with other colleagues who are WFH. And for long days at the home office, the penthouse includes a private spa with a massage room, sauna and steam room and more. The fitness studio comes kitted out with Technogym equipment, so workouts on even the rainiest of London days will be as top-notch as possible.

One of the bedrooms.  C&C

Other than having the caché of saying you live in one of the most expensive residential buildings in London, residents will also have access to four parking spaces, four storage units and two dedicated wine storage areas. Since the apartment is part of the Residences at the Mandarin Oriental, future owners will also be able to call on the adjacent hotel’s 80-person concierge team for assistance.

Of course, if you’d rather, you can pony up the necessary crypto to buy the place instead of cold, hard cash. It would cost about 4,300 bitcoins to buy the penthouse—no small fee either way, but there have been some equally over-the-top sales in the city as of late. Hedge fund billionaire and avid real estate investor Ken Griffin snapped up a penthouse near Buckingham Palace for about $139 million in 2019, and a penthouse unit has already sold in One Hyde Park for $155 million.