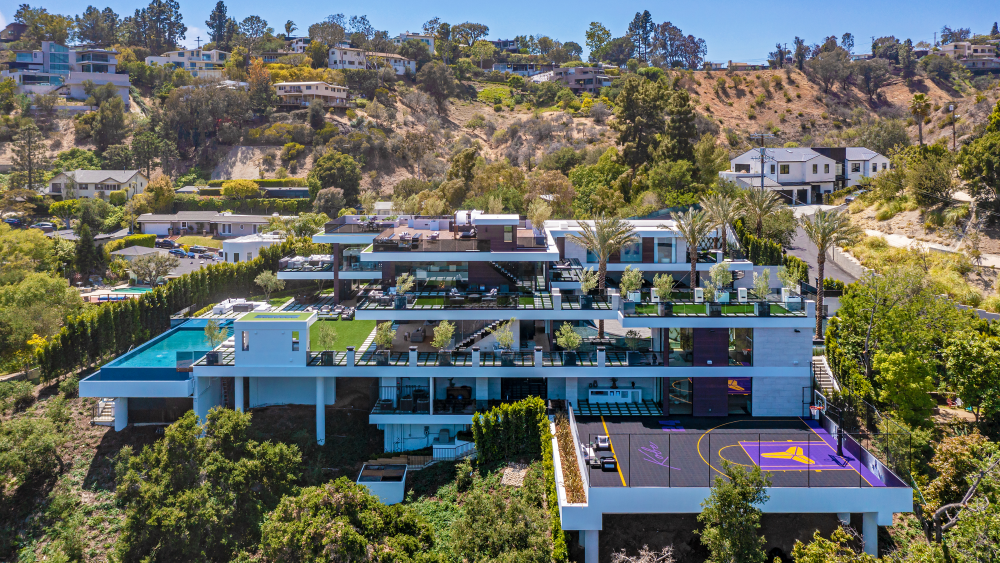 A sprawling, 54,885-square-foot mansion has just been snapped up by hedge funder Jeffrey Feinberg for $44 million—a price that succeeds the property’s original asking of $43 million—in an off-market deal. What makes it worth the splurge? For one, the home has amenities galore, particularly for sporty types, including a half basketball court, a three-hole putting green and a pool and spa. It’s also the latest from local developer Ramtin Ray Nosrati of Huntington Estate Properties, who incorporated one of his signature amenities into the space: a rooftop garden with cannabis plants.

“The second you go and enter this beauty, you feel like you’re on vacation,” Nosrati tells Robb Report. It is a very exclusive location; the home is situated on a secluded, 1.2-acre plot in Brentwood, with views of the nearby Getty Museum. There’s a guest house for visitors on the grounds as well as a driveway that leads to the basement.

Want to get a closer look at the digs for yourself? Robb Report got an exclusive tour from Nosrati, who showed off all of the home’s luxe features:

Inside, the mansion has a very open floor plan, with big glass walls that are indicative of contemporary California architecture. The great room has 26-foot ceilings, and the dining room has views of the kitchen through a 1,000-gallon, double-sided aquarium. These more natural elements continue at the base of the stairs, where there’s a cactus garden and a living wall of plants and succulents.

For large gatherings, there’s a second, more discrete chef’s kitchen on top of the open-concept one that has its own private entrance from outside. It even has its own walk-in refrigerator that looks like it was plucked straight out of a bustling restaurant.

The great room, which has 26-foot ceilings, and a “living wall” by the staircase  Photo: Simon Berlyn/Huntington Estate Properties

Since the walls are all glass, all of the living and dining spaces on the first floor look out on the front lawn, where there’s an infinity pool and a sitting area. You can cook up meals out at the outdoor kitchen, which has its own pizza oven, barbecue and LED TV.

Downstairs is where most of the big-ticket amenities are located, starting with the screening room, which is also known as the Rolls-Royce Theater. According to Nosrati, the tiny lights in the ceiling are modeled after the fiber-optic ones in a Rolls-Royce, hence the name.

The Rolls-Royce Theater, which features a ceiling with fiber-optic lights similar to a Rolls-Royce’s  Photo: Simon Berlyn/Huntington Estate Properties

For athletes, there’s an “all-sports simulator room” where you can play games such as golf at courses around the world, albeit virtually. Next door, the indoor spa has a pool with jets, which generate a current that you can swim against for a good workout, plus a hot tub that can be converted into a cold plunge pool. Water can rain down from the ceiling on command—the home is fully automated—creating a waterfall-like effect. For long days of hitting the weights, there’s a dual massage room for unwinding.

The main game room, or the “fun cave,” per Nosrati, features a video wall with nine TVs, which can all be calibrated to the same channel or play completely disparate programs. Next to it is a barbershop area where you can get a haircut—it’s just steps from the bar, which could be a recipe for a few bad haircuts—and the 10-car auto gallery, so revelers can take in the owner’s collection while partying.

The car gallery, which is connected to the game room, or the “fun cave,” downstairs  Photo: Simon Berlyn/Huntington Estate Properties

Outside is the “legends” half-basketball court, which is inspired by Kobe Bryant and prominently features his purple-and-gold Lakers jersey colors and his jersey number, 24. Other big-name stars of the sport are emblazoned on the borders, including Shaquille O’Neal, Michael Jordan, LeBron James and more. Since it’s on a floating deck, athletes can take in views of the whole city while they shoot hoops.

The home has not one but three decks. Two are on the second level—one for lounging, the other for playing yet more golf, as it’s a three-hole putting green. The final space is a roof deck, which features a garden with six cannabis plants. “I believe this is going to be the future,” says Nosrati. “You see a lot of wine cellars and different things in the home—this is where you grow your own cannabis.” According to The Wall Street Journal, Feinberg opted to replace the buds with carrots and cucumbers before finalizing the deal.

The half-basketball court is inspired by Kobe Bryant and honors other Laker players and NBA greats as well.  Photo: Simon Berlyn/Huntington Estate Properties

Finally, the primary bedroom has dual walk-in closets and bathrooms, as well as a private balcony, where you can enjoy views of the grounds below. The only downside to the property, of course, is that it’s no longer up for grabs.

Branden and Rayni Williams of the Beverly Hills Estates, Shauna Walters and Sally Forster Jones of Compass and Matt and Josh Altman of Douglas Elliman represented Nosrati in the deal.